8-bit Memoirs Issue #1 released! 8-bit Memoirs is intended to become a series of eBooks about how different authors experienced the computers and consoles back in the 8-bit era, written from the perspective of the kids we were at the time.

I'm proud to be able to present you with the first issue of 8-bit Memoirs, written by myself.

My stories contain supplemental illustrations, screenshots and videos - and there's a 5-hour long playlist to accompany you while you're reading, consisting mainly of the Amstrad CPC music I made back then, but also some tracks by various artists of IndieGameMusic.com

I have wrapped all the stories in a somewhat retrostyled diskmag-like GUI, because I've always found diskmags extremely cosy myself, and my biggest wish is that 8-bit Memoirs will give you the same nostalgic relaxation that diskmags has given me in the past. I also wanted to boost the retro-feeling while you're reading, and I think the diskmag-like GUI helps doing that.

Issue #1 is available as a 23 gb ISO file that you can download from www.8bitMemoirs.com

You can play this ISO file on your PC with any software media player that supports BD-J. I strongly recommend Cyberlink PowerDVD for this. Otherwise VLC is your buddy. (Although VLC is still in its early stages of getting BD-J support, so it's not the best way to experience 8-bit Memoirs at the moment. Expect bugs!)

Other devices should also play the ISO file, either from harddisk or from a USB: Devices such as the Popcorn Hour, or Dune HD Smart D1. In the near future you can also expect various software media centers, such as Kodi, to be able to play it.

The recommended way of experiencing 8-bit Memoirs Issue #1 is on a real Blu-ray player though. This includes the gaming consoles PlayStation 3 (and later) and Xbox One (and later).

But burning the ISO to a disc requires a Blu-ray burner, and not many people have one of those. You could buy one of course - they are exceptionally cheap nowadays - but that still only makes sense if you plan on using it for other things too.

If you don't want to buy a Blu-ray burner, but still prefers having a physical disc, then you can simply buy disc from me. It comes complete with printed label and cover for 17 Euro including shipping (regardless of your location). This disc can be bought from www.8bitMemoirs.com.

I can also send you a USB version for 23 Euro if you prefer, but you'll have to send me a message about that.

Thank you for your interest! 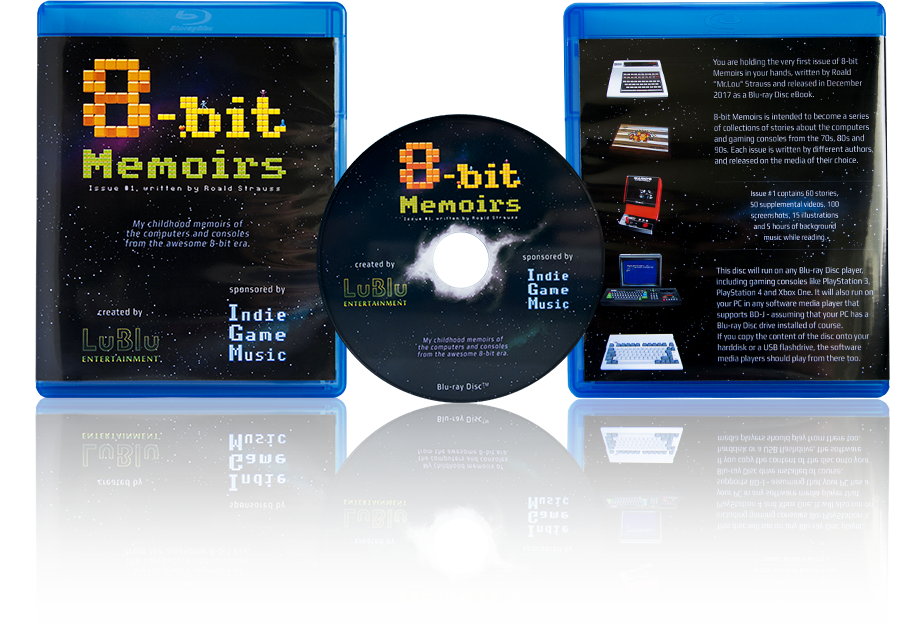 PSXHAX said:
Congrats on your first release of Issue #1 @misthalu!!!

Actually, downloading turns out to be rather fast. between 1½ and 3 hours. That's not so bad I think?

Well I hope you'll enjoy it. Remember, VLC is buggy. You can press SPACE to pause the music and thus escape the bug. Otherwise the text will disappear everytime the playlist goes to the next track. Very annoying. But hopefully the devs will fix it soon.

Or did you plan on burning a disc? Then there'll be no problems.

I do own a Blu-ray burner so maybe I'll just burn it... will reply back once I've watched it with my commentary and thoughts, probably towards the end of this month when I'll have some chunks of freetime to do it

Developer
Senior Member
Contributor
Don't forget you can have a disc delivered at your doorstep, complete with printed label and cover in a case.

The package + shipping cost 17 Euro, regardless of where you're located in the world. Useful for those complaining about the size of the download.

Developer
Senior Member
Contributor
I have been researching a bit, and have found a list of media players that should be able to play the ISO from harddisk and/or USB:
So if you have yourself one of those devices, you should be able to enjoy 8-bit Memoirs on your TV from the sofa. Just remember to switch the setting to "Full BD Menus" instead of "Simple BD Menu".

(Some devices may need latest firmware).

If you have success with media players not listed above, please let me know. I'm very curious!

Developer
Senior Member
Contributor
I have added an option to buy a budget version now for 7 Euro: A disc without print and without a case. Just plain white on a mat surface.