This weekend PS4 Scene developer @Markus95 (aka @Kus00095) announced on Twitter the release of his latest Beginning Of The End PS4 Homebrew Game Demo PKG for use on Jailbroken PlayStation 4 consoles.

A video demonstration of it in action from his YouTube Channel can also be seen below, and to quote from Logic-Sunrise.com roughly translated: PS4 Beginning of the end, a new homebrew on PS4

In development for more than 3 months, here is a first demo of my new homebrew:

Beginning of the end... This homebrew is surely my biggest project, entirely handmade (sprites, backgrounds, animations, etc.), I wanted to mix 2 games that I loved which are none other than The Last Of Us and Resurgent.

Indeed, Beginning of the end is a mix between Tlou (for the gameplay and the story) and Resurgent (for the graphics side). This demo, although quite short, shows roughly what the final game will give, an adventure / action / reflection game and this still developed with GameMaker Studio.

This homebrew has been tested and is functional on PS4 4.05, 5.05, 6.72, 7.02 and 7.55, I will also publish a Switch version and maybe Ps-Vita, but less sure for the latter because I encounter many bugs on the Sony laptop. You will also find some bugs on PS4 in this small demo, they will be fixed for the final version of the game.

I hope you will like this project, do not hesitate to report the concerns encountered during this demo in the comments of the news.

I would like to especially thank Darren Curtis, author of the superb music you will find in this game, but also all the beta testers, Camsko95, Lapy, Hyndrid and my great friend Red-J...

Orders:
Beginning of the end PS4 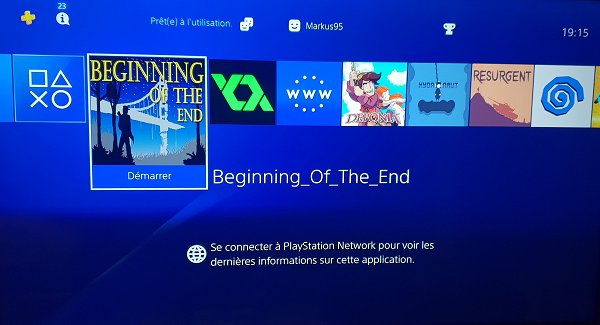 Staff Member
Moderator
Verified
Click on the blue 'DOWNLOAD (25.88MB)' button to grab the PKG... if you don't see one the file sharing site may be region-restricted but you can use a proxy / VPN to download it.

Thanks for the link!

Senior Member
Contributor
Works on my PS4 7.55 thank you