Awhile back we shared a PS4 Payload.bin tutorial, and today following his recent How to Run Free FULL Games on PS4 1.76 video @MODDEDWARFARE returns with another guide on setting up the $DK to build payloads that can be executed on a 1.76 PS4 through the WebKit Playground.

If you haven't done so already, drop by his YouTube Channel where you'll find many other excellent PlayStation 4 video tutorials as well as guides covering XBox One, XBox 360, PC and more!

To quote from the video's caption: How to Build Payloads in the PS4 $DK

How to setup the PS4 $DK to build payloads which can then be executed on a 1.76 PS4 through the WebKit Playground.

Compiling a payload and sending it via PS4 Bin Loader

Cheers to @Bultra for this news tip (and also letting us know about Arduino PS4) in the PSXHAX Shoutbox earlier today! 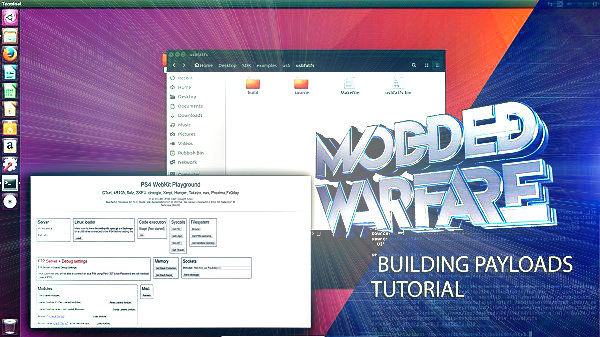 Senior Member
Contributor
Yes, but before you need the playload also to get the payback cfw.

Developer
Senior Member
Contributor
Verified
Thanks PSXHAX. Didn't think this would be on the home page.

Staff Member
Moderator
Verified
All of his are top notch, he explains things slowly and clearly in a down-to-earth manner without the useless music most other video guides are plagued with... so it's a genuine pleasure posting them here and I'm sure they help a lot of users too.

Senior Member
Contributor
Verified
I get this error

Senior Member
Contributor
what caused it or what was the solution ?

How did you solve the problem?