BwE PS4 NOR Validator by BetterWayElectronics

Why would you need to do this? Well if your console has suddenly died and has what is called the 'BLOD', the NOR can be the reason why.

Using my program will allow you to validate literally every single byte of the NOR (or 1782 specific areas) - allowing you to see where or if it is corrupted.

The most common area of corruption that causes the BLOD is the CID. This is mostly full of perconsole data and thus cannot be repaired.

Other areas can be inter-changed between different consoles and are more suited for repair, the WiFi/BT module is a good example of this.

So fundamentally, this program is for console repairers like myself. If you are indeed a repairer and run a business I can make a custom 'bulk' version for you!

This is the internal revision number 84 (and the first public version, obviously), so hopefully there shouldn't be any major bugs!

If you encounter any errors or weird results - or better yet if your NOR is labeled danger in any areas, but still runs fine - let me know!

This program is NOT perfect, but it is much better than just using a hex editor or never truly knowing if your BLOD is caused by the NOR!

This also goes above and beyond that of the psdevwiki page regarding the main flash of the PS4. When I have time, I will update it!

Have fun and good luck!

Fun numbers:
If you like what I do, or just like me for me, buy me a coffeeeee! 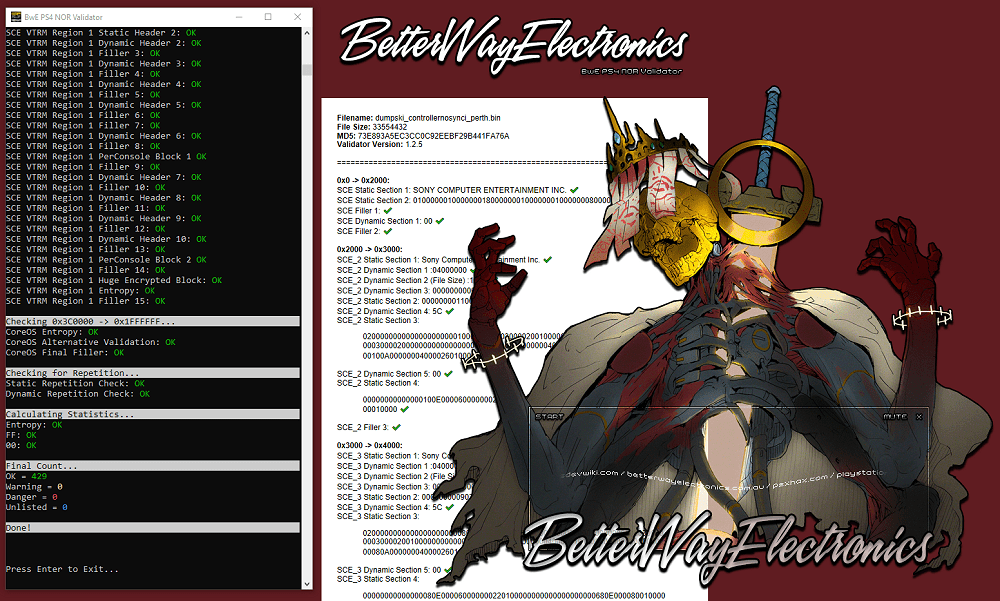 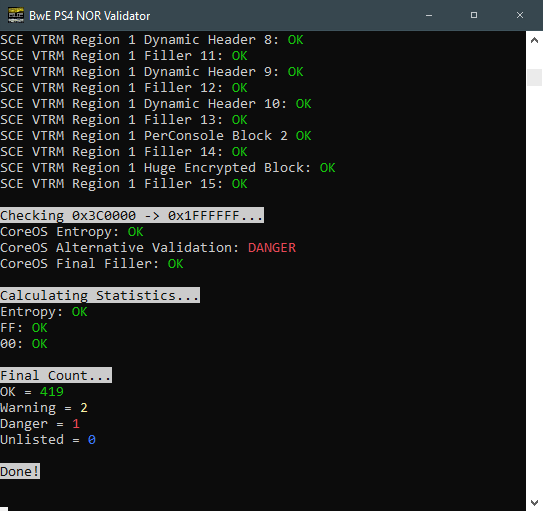 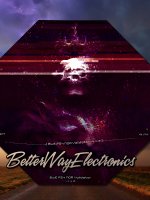 I barely even play the PS4, I don't really know why I like it so much!

Feel free to visit my website, or utilize my repair services if you are in Australia!

Senior Member
Contributor
Verified
@BwE Thank you for the update bro, you are the king

Developer
Senior Member
Contributor
People need to remember warnings are warnings. Don't stress. Unless there's like 5-10+ then you can ask me to look at it

Member
Contributor
Thank you BwE for your great work and support. Your application works like a dream.

Got two warnings on my CUH-1216B. The issue with my PS4 is that bluetooth is not working. I can't sync any controller. Now I think my bluetooth module is faulty or the soldering underneath has cracked.

For the purpose of reference for other users, I will paste the output of of your tool from my my CUH-1216B here.

Code:
Would these cause the BLOD? I have reballed the APU and done a complete transplant from a donor board and still have BLOD so I'm wondering if these warnings can cause the issue.

It seems to be the FF's in the middle of this section of the CID.bin

Code:
I havent found the UNK Dynamic section 13 yet in the dump but I'm guessing it will be the same scenario.. found it here in the UNK.bin

All the FF's in the middle:

Code:
Just dumped another NOR with these results from another BLOD console, even after an APU reball. Can warnings in the CID or UNK areas cause the BLOD? is my question

Are they console specific or can I insert from another dump that has data in that area? The ? in the dump are ticks lol

Member
Contributor
Hello! Can you help me? During the ps4 pro update, it crashed and turned off, now I have blod and it does not enter safe mode.

Member
Contributor
Verified
Hi @BwE
I believe i have stumbled across something interesting about update error ce-35888-2.

I've had about 10 consoles that couldnt update due to this error. They all had married, working logic boards on Saa or Sab boards. I put them to the side for latter.

Doing some research, I found Andrew Paul on youtube fix this issue by installing new matching syscon, flash and apu. Seems like a hell of a lot of work to fix this.

I recently acquired a bunch of untouched demo units that were on firmware 1.76. I usually install 4.55 and unlocked them from demo mode. Retail or jailbroken 4.55 they worked flawlessly.

I found that was the best route to avoid issues with firmware greater than 5.00 installing on wanky blurays/logic boards. I went to update to 5.05 on one of these consoles and it lost power during the update and guess what happened. 3 beeps and shut off, pointing to flash issue.

I removed flash and read it with teensy 2.0++. Got three matching dumps and BWE validator revealed this:

Code:
I didnt see any drastic problem, but then again, ive only validating a handful of these, so i reinstalled the flash untouched.

To my surprise, the 3 beeps was gone and i could load into recovery, but still get update error ce-35888-2 everytime. Unit was fully working on 4.55 prior.

I believe the flash or syscon has something to do with this error and it might reset and allow for updating somehow???

I then thought to try to update some of the units that had failed with this update error, and i was able to update 2 successfully now, were i wasnt able to the first time.

Would be great to fix this type of error by manipulating the flash reliably somehow.

Can you look at the dump and let me know what you think? Please and thank you.

For those interested I was able to sort out the above issue with ce-35888-2 and can confirm that it isn't an issue with an unmarried logic board.

I did not touch the flash. I got into recovery and was greeted with the usual menu. I thought to try hot swapping technique, so I disconnected the ribbon cable leading to the logic board after successfully getting into recovery. I did a re install and the update took. 4.55 is back and running.

Member
Contributor
Verified
Keep it up...
You must log in or register to reply here.
Share:
Facebook Twitter Reddit Email Link
Recent Articles
PlayStation 5 User Interface (PS5 UI) Rumored Image Leak Surfaces
An image that is rumored to be a screenshot of the current PlayStation 5 User Interface (PS5 UI) has reportedly leaked by an Anonymous game studio employee on the popular 4Chan bulletin board.