Previously we reported that the PS4 Pro Ships with 3.70 Firmware and the Uncharted 4 PS4 Bundle Ships with 3.55 Firmware currently, with a few handy Minimum Required Firmware PS4 Games Lists available so you can see which PlayStation 4 titles will run on the console without updating the stock OFW.

Below are all the details, to quote from John Koller:

This bundle is great for fans who have not yet experienced the grand-scale intergalactic battles of Infinite Warfare. It’s also a fantastic opportunity to relive the iconic campaigns of one of the most critically-acclaimed games in Call of Duty history, with Modern Warfare Remastered. The bundle also comes with a Terminal Bonus Map, which transports players to the re-imagined version of the fan-favorite Terminal map from Modern Warfare 2.

The Call of Duty: Infinite Warfare Bundle is an awesome addition to the PS4 hardware lineup, and is another great reason to join the PS4 Community. With an incredible lineup of games coming in 2017, now is the time to get that PS4 you’ve always wanted.

Happy holidays, and see you online!

*Only available at select retailers in Canada. 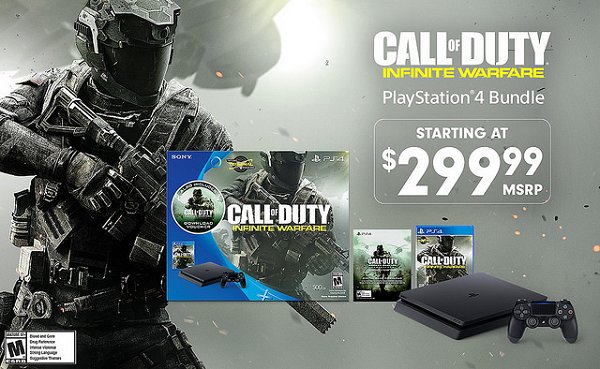