Still good news !! Here on Cybermodding mica you sleep! In fact, we give you a new gem, all for you!

Our dear friend and developer Alexander knows no respite, and there he is to release a new version of its CFW FERROX.

After the recent release of Standard Versions CEX, and after the new COBRA, here comes one of the traditional versions of FERROX, that Alexander has pursued for a long time. We speak of the Custom Firmware FERROX in NoBD version!

BUT...!!!! More news! In NoBD version of CFW FERROX, even the Patch COBRA were integrated. The first version of COBRA - NoBD together for FERROX!

Thanks to this special version of the CFW, users who own a PS3 with Logica route, will return to start games and Homebrew !! Logic route is in fact a beautiful pain in the butt.. For this CFW NoBD exists, that goes to completely disable your Player. Therefore a very important version, and vital for many users. Let's meet the specifications:

From this version, the FERROX takes a new look. Ideas realized by dear MiZiO90 , who worked to make the coolest FERROX CFW around! It is not a theme.

It is some internal changes. Changes were introduced to 'clock, the horizontal lines in the screens, in colored lettering, to' Full Banner at the top right, in the section 'System Upgrade', to the menu screen that appears when holding down the PS button, and a new logo FERROX pulsing during uploads.

A large lavorone! Combined with the new Look with your theme you prefer. Or maybe combined with a Wave! It comes out a XMB fear

PS. The Logo FERROX bottom right, is only visible to 1080p resolution. I think we all still play with the 'HDMI. Then no problem!

These are the tests carried out by us on the console in our possession.
FEATURES COBRA:

As you know, the CFW COBRA are the most desired by all. This is because many have additional functions compared to a standard CFW. Let's see:
INSTALLING THE CFW:
I would like to again take this opportunity to Thank our Dev Alexander for all their hard work. Remember to install this CFW NoBD ONLY if you have the logic route. So if your player will do tricks! Otherwise it is useless, even counterproductive it !! 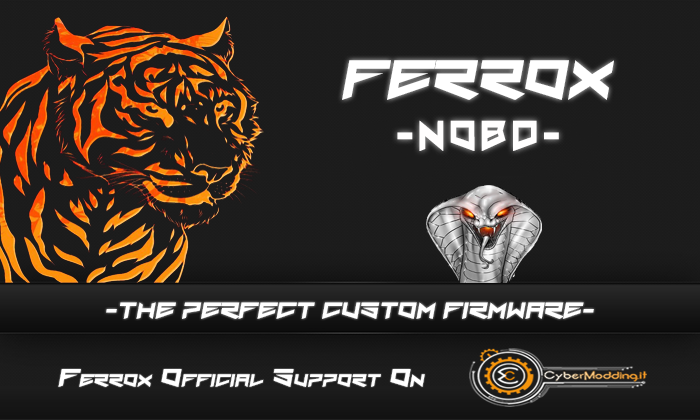 Contributor
what's difference between that and last one

Staff Member
Moderator
Verified
This one is mainly for those with no Blu-ray drive or one that's broken, etc.

PSXHAX said:
This one is mainly for those with no Blu-ray drive or one that's broken, etc.
Click to expand...

Contributor
it refuse to launch games through multiman 4.80

Contributor
I have a CECHC04 and i have some issues with some games, but most irritating is that i cannot launch PS2 games. When i run one the monitor goes black, and the whole console freezes (nothing happends when i push PS3 button on the pad). Any ideas how to fix this ?

Thank you in advance

Staff Member
Moderator
Verified
Ok so you have a CECHC04 fat with backward compatibility that is currently on which Firmware (OFW/CFW/etc) version?

Regarding the PS2 games.. do you mean PS2 Classics (PKG), PS2 ISOs (not converted) or actual PS2 games on disc?

Other tips for PS2 game blackscreens on PlayStation 3 CFW I've read are if you're on DEX switch to CEX, or use @aldostools PS3 Tools Collection GUI to convert them to PS2 Classics on your PC.

If you are on Ferrox 4.80 CFW it may be worth trying Rebug 4.80.1 CFW with Cobra enabled in the Rebug Toolbox or via mmCM / multiMAN.

I believe this is CEX already. i mean PS2 iso files run by multiman.

So you suggest running them through a converter and/or switch to different CFW ?

because i have other issues too - like no cutscenes in "the last of us" or missing part of the audio in GOWIII etc.