Here we are !!!! We promised a nice surprise not ??! Well, more surprise than this one can not directly from CyberModding, our friend and Developer Alexander delights us with this new version of its FERROX!

It is no COBRA Lite, like some old FERROX. This new version implements the new Patch COBRA 7.3 updated Developer from Habib. Let's go see the features of this brand new CFW:

From this version, the FERROX takes a new look. Ideas realized by dear MiZiO90, who worked to make the coolest FERROX CFW around! It is not a theme.

It is some internal changes. Changes were introduced to 'clock, the horizontal lines in the screens, in colored lettering, to' Full Banner at the top right, in the section 'System Upgrade', to the menu screen that appears when holding down the PS button, and a new logo FERROX pulsing during uploads. A large lavorone!

Combined with the new Look with your theme you prefer. Or maybe combined with a Wave! It comes out a XMB fear.

PS. The Logo FERROX bottom right, is only visible to 1080p resolution. I think we all still play with the HDMI. Then no problem!

These are the tests carried out by us on the console in our possession.
Also thanks to Orion90 for Test on some Build.

INSTALLING THE CFW
The Developer Alexander is keen to thank the dear Joonie86 for some very valuable advice on some Patch !! Thanks also to all of us.

In the Dev Github Alexander, it is the Source Code of the whole Porting of COBRA 7.3.

I want to thank the developer Alexander, putting us all of himself to always bring the best !! A heartfelt thanks from all CyberModding and the whole scene PS3 !! 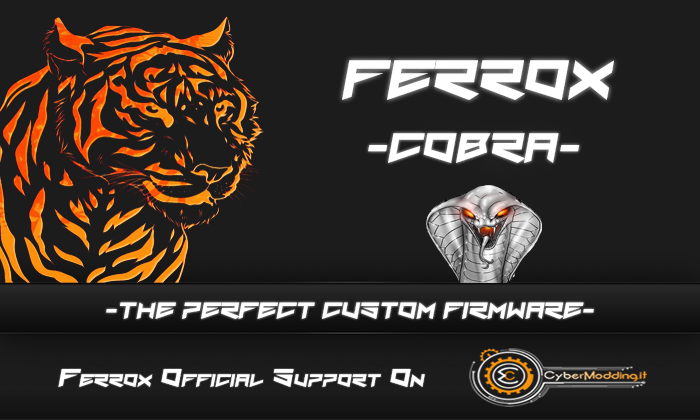 Member
Contributor
thank u a lot

Contributor
thats only to cobra

Contributor
Hello. Sorry, im kinda noob in PS3 so i need to ask to be sure.. I have CFW4.78 Starbucks + COBRA v7.30 by Habib, i can update with this one?
Thank you.

Contributor
Every time i try to update to 4.80 FERROX, I get a error, please help me!

Senior Member
Contributor
What? Are you running a CFW already? Are you at least Running 3.55 OFW / CFW? IF NOT then you will not matter what you do get an ERROR!! What's your CFW OR OFW version number? 4.80? are you running orignial firmware? is your console Jailbroken even?

Okay! in that case you will not be able to jailbreak your PS3 unless you downgrade it. and for that. you need a soldering kit. E3-Flasher (Order HERE) OR Progskeet (Order HERE) both work fine. Progskeet downloads HERE & E3-Flasher Downloads HERE as well as E3-Flasher INFO HERE & Progskeet INFO HERE
You must log in or register to reply here.
Share:
Facebook Twitter Reddit Email Share Link