Pre-loading begins on August 7th at 9:00 PM Pacific, and here's a rundown of all seven, to quote:

Take a few minutes to watch the Basic Video under How to Fight in the hero menu for each hero you want to play. It’ll show you their playstyle and a few moves to try out. You don’t need to master the Berserker’s Bear Mauler combo right out of the gate, but knowing that they can’t hold their block stance like other heroes will help you stay alive longer.

All the heroes, including the new Shinobi and Centurion, can be used in the practice mode available in the How to Fight menu. This is the perfect spot to get your bearings and try out a combo or two before heading out to the battlefield.

If you finish off an enemy with a Heavy Attack (R2), you’ll get a chance to perform an execution. Not only do executions look friggin’ awesome, they also restore some of your health. Just be careful about executing an enemy if their friends are nearby, because they can (rudely) interrupt you.

4.) Don’t You Forget About Feats

Each hero has an array of special attributes and abilities called feats that unlock as a 4v4 match progresses. Some give you passive benefits, but others need to be activated by using the D-pad. For example, using healing feats when your health gets low can keep you alive long enough to use a more aggressive feat: calling in a catapult strike to decimate your enemies!

If (or rather, when) you end up outnumbered in a fight, don’t give up! Blocking and taking damage fills your Revenge meter. Activating a full Revenge meter will automatically knock back any attacking enemy and boost your attack power and speed. Focus on killing one of your foes in this powered-up state, and you might just make it out of there alive.

Catch your opponents off-guard by starting a Heavy Attack (R2), then canceling it (Circle) and immediately following up with another strike or a guardbreak. Cracking through a stalwart defense can take some creativity, and feints are a good way to bait your opponent into giving you an opening.

If you get a taste for video game glory and want to continue to play after the free weekend ends, you can purchase the game for 50% off between August 10 and August 20. Any progress you make while playing for free will carry over when you buy the game, so you won’t have to leave any of your hard-earned loot behind.

Hot on the heels of the free weekend, For Honor will be starting its third season — “Grudge and Glory” — on August 15. This event introduces new maps, adds ranked play, delivers a heaping helping of gameplay updates, and debuts two new heroes. The claymore-wielding Highlander will join the Vikings, and the Knights will welcome the Gladiator, who brandishes a long trident and small buckler.

You can get a glimpse of the new heroes and maps in action during the For Honor Season 3 Live Event: Grudge & Glory Reveal livestream tournament that will air starting August 12 on Twitch. 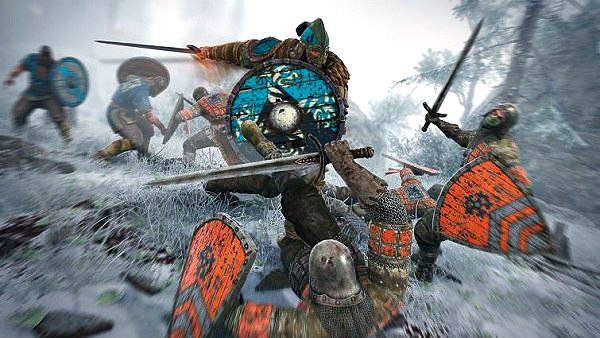