The alternative 1960s England style game takes place in the city of Wellington Wells where conformity is key with citizens blocking out their traumatic memories of the town's past using a literal happy pill called “Joy.”

Those who pre-order at PlayStation Store will also get a new PS4 Theme and the in-game Jolly Brolly parasol weapon, and here's more from Gearbox Publishing Community Coordinator Meredith Hershey to quote:

Take advantage of each character’s playstyle, whether by choosing to fight your way out of conflicts, sneak past unseen, or blend in with the townsfolk to avoid their suspicion.

Just don’t get caught off your Joy. Only Downers refuse to take their Joy, and you don’t want people to think you’re a Downer, do you?

We Happy Few will be available for $59.99 on PlayStation 4 on April 13th, but you can pre-order to get 15% off the total price – plus the in-game Jolly Brolly parasol weapon – from now until launch. As an exclusive bonus, PS4 users will receive a We Happy Few PS4 dynamic theme made by Truant Pixel!

Those who seek further adventures in Wellington Wells can purchase the We Happy Few Deluxe Edition to access the DLC Season Pass! The Season Pass will consist of three pieces of additional game content, which will be released as they become available.

Superfans can pre-order the We Happy Few Collector’s Set, a separate box set chock full of groovy goodies, including:
The Collector’s Set will run for $149.99, but quantities are limited, so act fast to get yours! 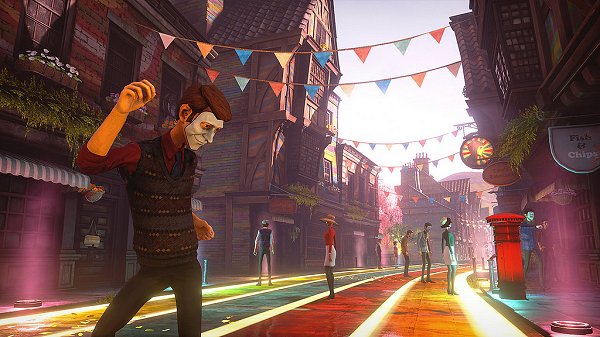