This led to reports of growing concern from some PS4 Pro owners noting the lack of a 1080P downsampling option among other disappointments despite having Boost Mode on the PlayStation 4 Pro.

To quote: "Sony does not seem to care and this disregard is all the more jarring after Microsoft revealed that Project Scorpio handles all this at a system level, allowing 4K and 1080P users to choose between resolution and performance modes in every single game. We can only hope Sony will make an effort to push developers to deliver better PS4 Pro support."

Check out the video footage below, and if you're a PlayStation 4 Pro owner with a 4K TV let us know in this week's poll if you are satisfied overall with your PS4 Pro console's 4K support... or if you feel Sony should step up to the plate and implement a system-wide solution similar to Microsoft's upcoming Scorpio video gaming console. 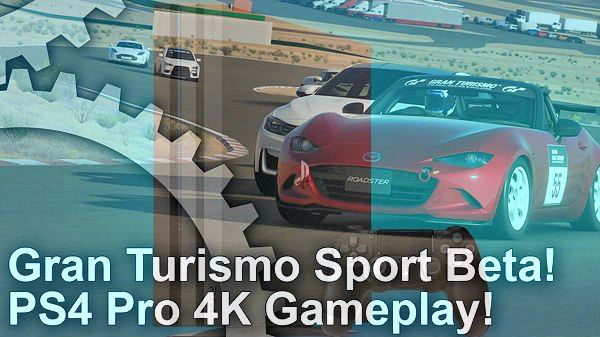 Polyphony should release the rest of updates for GT6 soon this year, that game is almost abandonware.

If this time dont deliver some fun to users, GT saga will die with this game.

PSXHAX said:
I thought the same thing at first, but see here: Native 1800p vs. 1800p Checkerboard on PS4 Pro
Click to expand...

Yes, was a joke, i knew that, the "typo" mainly comes from the GT side. Anyway its not the FR what matters here.

GT games where my favorites since PS1, but every time this saga falls down a lot of steps in the standards as a game/fun/replay-value product.

I prefer GT6 today, but only because i didnt find a good cars game this generation. Only fireworks for reviewers, nothing for the user.

Staff Member
Moderator
Verified
Ahh, I don't have a 4K TV yet myself so it was news to me

Senior Member
Contributor
Verified
It's only a beta and they are still updating it. Hope the release is this summer but more likely it will be a holiday release. I never got my beta invite though probably because my ps plus is expired. b1tches lol