Since the initial announcement by @Octopus (aka oct0xor on Twitter) here's a summary of what to expect in his 36c3 talk that will be livestreamed in English (YouTube Channel) on Hacking Sony PlayStation 4 (PS4) and PlayStation 3 (PS3) Blu-ray Drives during the 36th annual Chaos Communication Congress at the Saal Borg Lecture Hall in Leipzig Germany on December 28, 2019 at 22:10 +0100 CET (4:10 PM ET - Current Eastern Time).

Xbox 360 video game console had a number of widely known hacks for firmware of its optical disc drives. However, it was never the case with Blu-ray disc drives of Sony PlayStation video game consoles. In fact, up until recently there was no much information available on this subject publicly.

In this presentation, I would like to share my journey of delving deep into internals and security of Sony PlayStation Blu-ray disc drives. As games are distributed within optical media, those embedded devices were intended to contain the best security possible.

I will demonstrate a multiple hardware hacks and several software vulnerabilities that allowed to dump firmware and get code execution on multiple models of Sony PlayStation Blu-ray disc drives.

It will definitely be an interesting lecture for PS4 scene developers seeking to learn more about the PlayStation 4 Blu-ray drive security and vulnerabilities, however, end-users are reminded to remain patient for a future PS4 jailbreak exploit... those who can't wait may want to locate a jailbreakable PS4 5.05 / 5.07 console to enjoy hundreds of PS4 FPKG games already available and cure cabin fever this winter! 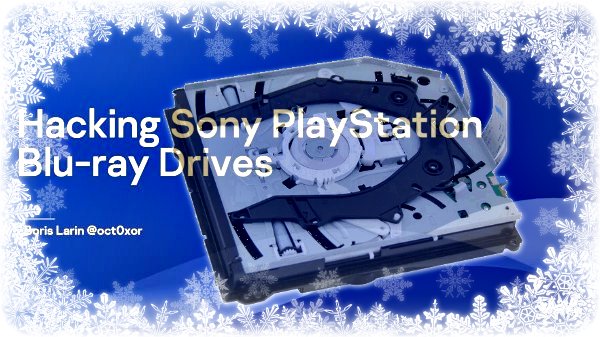 Member
Contributor
Maybe they’ll do some kind of emulator now.
Hacking is coming!

Senior Member
Contributor
Verified
do we have a HAPPY new year this time now?

Senior Member
Contributor
Verified
Great! I look forward to hear about expanded hacks for the ps4 !

Senior Member
Contributor
Verified
@hyndrid We can only wish

Senior Member
Contributor
Verified
some questions remain in my mind.. is the BD fw separate from system fw (if the answers yes maybe it hasn't been patched yet in 7.02), what is required for hacking the drive and what it can do as far as code execution in its current state?

Senior Member
Contributor
Verified
@chrisrlink i believe it is different.. like c4eva did in xbox360 days when jtag/rgh isn't available that time.. you just flash the dvd firmware and you are ready to play bootleg dvds back in the days

Member
Contributor
Verified
Bring to us !