Hacking the PS4: From Zero to Ring Zero in Two Easy Steps PDF

Below are some related Tweets, and thanks to Scofield0 for the heads-up on this earlier today! 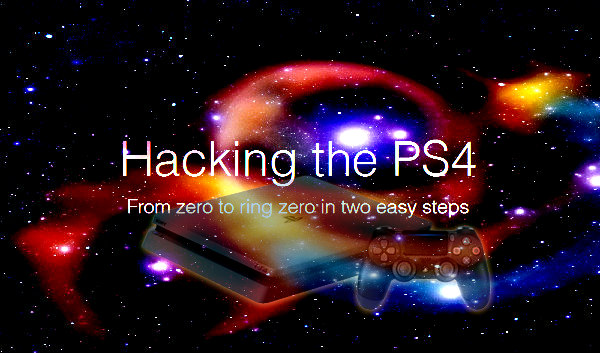 Senior Member
Contributor
this hacker Mathieu Hervais only has a throat, because if it really was with the exploration it would have already released is weak even this jailbreak is a joke, there are no hackers like in the past! I will give credits when I release 5.55

Member
Contributor
someone tell me what the propose of this i can not understand any thing of this ????

Member
Contributor
Verified
Who knows Mathieu from the past, always know that he rarely shared things. He "spits" bits and pieces here and there, but usually don't share things (well, at least as standalone, but as a group, dif story). Others scenes were the same. The PS3 had his 2012 keys release cause of a leak, and only because some company wanna profit from others work, the LV0 keys saw the light of day (DRM devices), cause those keys were in "the hands" of scene group(s) for long.

The dev's don't support backups, so they won't release a 0day exploit. Nevertheless, any release will lead to backups. Looking back to the PS3 scene, backups had a big impact and online modding after 2012 LV0 keys "leaked". The PS4 is a dif story, but in the end, will be the same, no 0day exploit (till someone leak something or the scene came together for a newer release) and most dev's do it for fun/challenge/open the "box" to homebrew for personal use and so on...

Also, many dev's don't share things cause of most people asking for a 0day release and they "leave" the scene. People must be happy that those exploits see the "light of day", even a "new" like the 5.05 where all consoles shipped till the end of 2017 came with that fw or lower. As for online gaming, there's a big road still to go and i don't see it happening like on the PS3 (at least for the end user, privately may happen).

Think that a 5.50+ exploit will take long to see a release, but who knows the future.

The qwerty presentation was a nice read and people should be happy that the scene present dev's are releasing stuff! They could've just kept it in private, you know..! Also, the write-ups may help others to be involved on this scene. Always a great read those write-ups since CTurT now with SpecterDEV.

Senior Member
Contributor
Why are people rushing him for the 5.XX exploit? You children need to relax and let the man do what he gotta do. How about you play some of those older PS4 games you got for free?

Senior Member
Contributor
STOP SAYING WE SHOULD BE GRATEFUL BECAUSE IF ITS PRIVATE WHY BRAG YOUR POST MAKE NO SENSE @FalconIndestro THEY BRAG LOOK AT ME I GOT SONY BUT WHEN YOU ASK WHEN YOU RELEASE THKEY SAY STOP BEGGING THEN DONT TALK ABOUT IT, LIKE ME TELLING A GIRL I GOT A BIG PACKAGE THEN SHE ASK TO SEE AND I SAY NO LOL

Senior Member
Contributor
Verified
Thays what I have been sayin.... Very simple.

PUT UP OR SHUT-UP

These guys can brag all they want but we are supposed to be quiet and patient?!? NO!

Senior Member
Contributor
badyloo just wait for the fw exploit, after confirmed then update, be patient.