I hope this is the right subforum to post this, but anyway, here goes;

As the Disney Infinity Shared Toybox worlds are shutting down, next week on March 3. 2017, I thought it would be an great if all the Toybox worlds that people have been making over the years, could be preserved and atleast be used on PS3 CFWs and Jtagged X360s as I suspect the fileformat is universal for Infinity games, across platforms.

I've downloaded of the Disney curated "Shared Toyboxes" for Infinity 1.0 (only 99 pieces, as one would not download), but in a very "Disney-like" move, even after being downloaded and stored locally (it even says "stored locally", the Toyboxes still requires you to be online to play.

So my hope was that I would be able to easily replace one of the single player toybox files, with the corresponding one from one of the "Shared Toybox" filesets - I've had no luck though.

So I thought I'd come here, while there was still time to mess around with it, and was hoping someone else maybe wanted to try it out.

By the way, the files have been downloaded with a EURO/PAL version of Disney Infinity 1.0, but I suspect if you change BLES01844_RR to whatever SLUS your game has, it will work 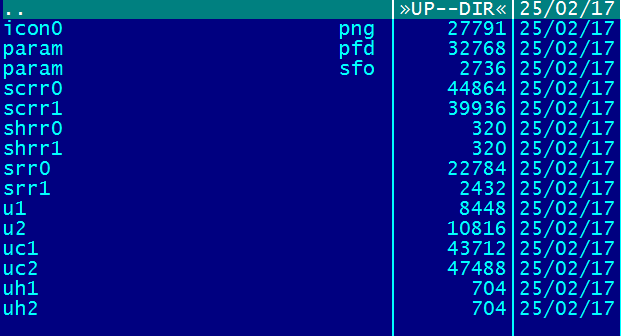 Some comments on the files:

2. The PARAM files are "personal" files and save does not seem possible with them and I could not get them to be regenerated, after trying to delete them, so I could not save till I restored them. I.e. in the PARAM.SFO file there is a string (columnheader?) that says: ACCOUNT_ID ATTRIBUTE CATEGORY DETAIL PARAMS PARAMS2 PARENTAL_LEVEL SAVEDATA_DIRECTORY SAVEDATA_LIST_PARAM SUB_TITLE TITLE

There is also a 20 character hash (consisting of the usual 0-9 a-f) after the "columns", that I think is my Disney Infinity online ID.

3. All files beginning with S* is offline saves - the S*0 is the autosave

4. All files beginning with U* what I'm assuming is the locally saved versions of the "Shared toyboxes" - starts from U*1 - no U*0

1. The offline savegame fileswap, I mentioned above - I think the smallest file in each set, may be something to do with ownership - based on the text saying "You have taken ownership" when starting a new, blank toybox

2. As I just picked up my Disney Infinity games last week, I have not unlocked anything (apparently there are like a 1000 items) for building my own Toybox.

When you open a "Shared toybox", and you do not have unlocked all of the items used in that world, you will be notified upon starting the level, that you will not be able to save or edit the Toybox, because you don't have all items used, unlocked. I would be interesting to see what their files will be called, but I fear that they can also only be loaded from the Online menu, called "My Toyboxes" and are possible cloudsaved - does anyone have a chance to check it out?

Here I'm linking the 99 levels I downloaded for Disney Infinity 1.0 (zipped with full filepath to PAL versions savepath), hoping someone else wants to give this a crack and hopefully have some luck: disney_infinity_1_0_all_shared_toyboxes.zip / Mirror

Staff Member
Moderator
Verified
Thanks for sharing this here @Bitcrusher, hopefully some PS3 enthusiasts here will also join in the fun on this preservation project!

Contributor
As I don't have Infinity 3.0, I'd like to ask if someone here, could perhaps download all the toyboxes for 3.0? I'll be doing all of 2.0 today or tomorrow.

Contributor
Hey mate! Awesome work! The offline toyboxes work great! My kid and I will have a blast I uploaded them in the BLUS30977_RR folder (probably US version) and they were perfectly compatible.

Did you ever get around doing the same thing for the 2.0 version of the game? I got DI on the 4'th of March.. and was pretty disappointed to see all the community and creations were shut down. This is really crappy of Disney.

Contributor
Hey @Bitcrusher any luck at getting 2.0 uploaded? Would love to get all I can get my hands on

Contributor
Can anyone link me or tell me the process to get these worlds uploaded from step 1 and if i need to "mod" my ps ? Trying to get the worlds up for my kid

Senior Member
Contributor
Verified
Got the game Disney Infinity 1 / LEGO Dimensions recently, and I have no idea that these Toy Pads and Game Bases are required.

Did you guys have any updates on this matter?

Contributor
Files now removed. Seen as this is an old thread is anyone else able to upload? Just to keep this going

Staff Member
Moderator
Verified
As the original poster hasn't been online since 2017, I added a mirror of the files to the OP now for anyone who'd like to resume this project.