After having some problems with ripping Far Cry Primal and Battlefield 1 i wanted to make the whole process a bit simpler so i wrote a small ahk gui that does almost everything automatically for you.
Instructions are almost the same as with KitchenAID, summed up:
That's it

Cleanup has to be done manually using the CLEAN.bat file, i will not let the app do that..

Its already skipping the pfs file and directly using app0, the icon0.png will be crushed to fix far cry primal issues with Fake PKG Generator. Most of the process is using simple scripts you can edit yourself.

I'm still working on automating Fake PKG Generator, if that could be done the whole process would run automatically. it seems to have some arguments but nothing i tried is working and i haven't found much documentation.

I'd also be interested in some knowledge on how to download updates <4.05, then we could have some easy ripping solution.

But for the time being this is at least making my workflow much simpler, hope someone finds this useful too.

Comments and Feedback are welcome.

@cfwprophet
FOR Fake PKG Tools used to build the PKG

@XVortex
FOR the FTP Payload

@NORATIO
FOR PKG KitchenAid as a blueprint for the whole process 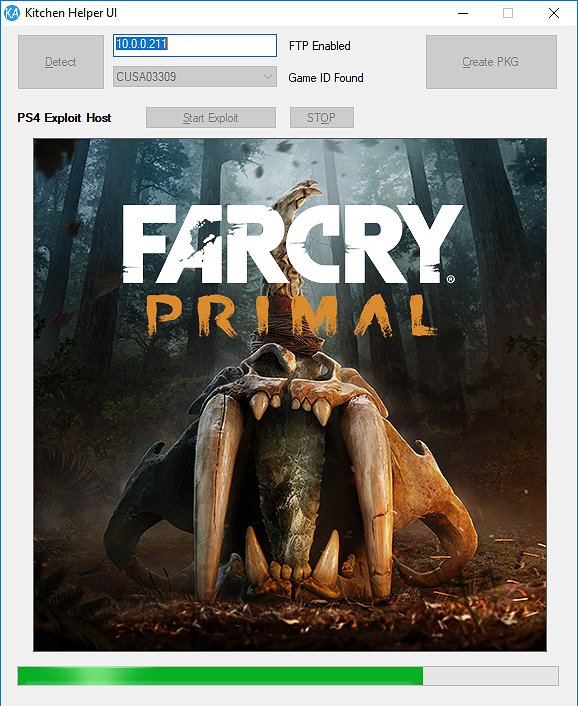 Senior Member
Contributor
Verified
sorry I thought the kitchenaid thing was phased out?

mschumacher69 said:
PKG Kitchen has been deprecated, use GenGP4 instead.
Click to expand...

I honestly don't know??? Feel free to voice opinions because I will try to actually put HEN on my PS4 tonight (yes I know...bit late) BUT I'd love to know what is the fastest, easiest most stable way to go about it

Staff Member
Moderator
Verified
PKG Kitchen is what's phased out in lieu of GenGP4 (both by XVortex).

What this frontend is for is KitchenAID by NORATIO... it gets confusing due to all the Kitchen names.

Added to the main page now and thanks for sharing @echs!

Developer
Senior Member
Contributor
Verified
This isn't working for me.

Member
Contributor
Verified
FTP payload by @XVortex.
See manual for this payload:
"It will dump game into /mnt/usb0" after custom ftp-command DUMP CUSAxxxx. Topicstarter miss this info imho.
@Riccardo82 You insert USB-stick/HDD formatted in exFAT in right USB port before start this case?

Developer
Member
Contributor
ok, i will look into adding GenGP4.

Thanks for adding to the frontpage! WOW


sdlc said:
FTP payload by @XVortex.
See manual for this payload:
"It will dump game into /mnt/usb0" after custom ftp-command DUMP CUSAxxxx. Topicstarter miss this info imho.
@Riccardo82 You insert USB-stick/HDD formatted in exFAT in right USB port before start this case?
Click to expand...

I know that you can do this but i wanted to directly copy using FTP, since its much faster for me. i get around 60 mb/s using a direct connection.


Riccardo82 said:
This isn't working for me.

so it seems your ps4 is not detected. you can just enter your PS4 IP manually in the text field.

if you know how, you could run this in a command prompt and see if it gives you the PS4 IP
this may not work in all network setups, so you can always manually enter the IP.


Code:
if everything fails you can always just edit the script:

Member
Contributor
Verified
Yea, I get the same error. Says game not found when you hit the detect button

raphaeld82 said:
Yea, I get the same error. Says game not found when you hit the detect button
Click to expand...

found the bug! i have no idea why this did work for me but i fixed it. i was moving lftp from a subfolder to tools\ but did not update the script

this should fix it: