Asterigos is an upcoming Action RPG, aiming to release on PS4, PS5 by 2022.

Before F1 2021’s release, we revealed that we would be adding three circuits: Portimao, Imola, and Jeddah as free post-launch updates. Today, we release the first of these and delve into the other exciting updates arriving in the months ahead.

Here’s a quick glance at what you can play from today, after downloading the latest update:

Portimao available for all players

"This whole island's like a broken record, skipping endlessly on one fullfilling day". Welcome to the island of Blackreef, where the fun never stops and every day is a celebration of debauchery and chaos... unless you’re Colt, a prisoner in this timeloop who is being hunted by every person on the island.

You have 24 hours, 8 targets, and 1 rival assassin hunting you down... Do whatever it takes to break the loop.

Hell is coming. Pursue the mysterious Dark Wanderer and fight the denizens of Hell as you uncover the fate of the Prime Evils Diablo, Mephisto, and Baal.

Who will stand by you in the face of madness? Meet your allies in MONARK, and be sure to keep them close as you traverse between the real world and the warped reaches of the Otherworld!

Bonfire Peaks launches on PS4 and PS5 on September 30th.

Move onwards, move upwards, and leave nothing behind. Bonfire Peaks is a puzzle game about closure, by Corey Martin and published as well as co-produced by Draknek, creator of A Monster’s Expedition and Cosmic Express.

Navigate over 200 expertly designed puzzles in a breathtakingly lovely voxel-based world. Filler content has been burned away to create a perfectly fine-tuned experience, filled with richly rewarding challenges and surprising new mechanics that’ll keep sparking your interest right through to the end.

Tinykin is an adventure platformer coming to PS4 and PS5 in summer 2022!

Milo arrives on Earth to find that he's way too small, everybody's gone and a day hasn't passed since 1991!

Catch hundreds of mysterious tinykin and use their unique powers to create ladders, bridges, explosions and a lot more!

SpiderHeck is a physics-based brawler, pitting you against your friends across a series of absurd, dynamic levels. Duel to the death or choose to team up and hold back swarms of savage enemies. Swing, stab, and shoot with style, effortlessly performing movie-worthy parkour.

A weapon worthy of a prince. Let Ager's Scepter light the way.
This Exotic Stasis Trace Rifle will leave your enemies slow and cold.

Dive into the free-to-play world of Destiny 2 to experience responsive first-person shooter combat, explore the mysteries of our solar system, and unleash elemental abilities against powerful enemies. Create your Guardian and collect unique weapons, armor, and gear to customize your look and playstyle.

Experience Destiny 2’s cinematic story alone or with friends, join other Guardians for challenging co-op missions, or compete against them in a variety of PvP modes.

Welcome to the Species Field Guide, a series focused on bringing you up to date information on a range of the prehistoric animals and dinosaurs in Jurassic World Evolution 2. This week is focused on the infamous Tyrant Lizard, the Tyrannosaurus Rex.

Get ready to see T.rex and many other prehistoric animals in Jurassic World Evolution 2, A World Evolved. Coming to PlayStation 5 and PlayStation 4 on November 9th 2021.

The experts have spoken, now the debate begins. Presenting the official FIFA 22 player ratings, powered by the Ratings Collective.

Pre-order the FIFA 22 Ultimate Edition by October 1 to get an untradeable Ones To Watch player!

Superstar X-Factors allow you to unleash unique player abilities that make stars feel like stars where their time on the ice is more influential than ever.

Reserved for only the more elite players in the league, Superstar X-Factor abilities separate the best from the rest, and make superstars feel like their real life counterparts.

Find out which 50 NHL Players will have X-Factor abilities on September 20th. Who do you think deserves an X-Factor? NHL 22 officially launches worldwide October 15th.

From Haptic Feedback to 3D Audio and brand new HyperMotion Gameplay Technology that makes every match in every mode even more real, FIFA 22 is Powered by Football on PlayStation 5.

Take a fascinating look at the evolving VFX magic that brought Returnal to life in this brand new deep-dive from developer Housemarque.

Sherlock Holmes Chapter One is coming to PlayStation 5 on November 16th. Become young Sherlock and witness the rise of the legend in this open world detective thriller.

Astria Ascending, a J-RPG developed by Artisan Studios, will launch on September 30th on PlayStation 4 and PlayStation 5.

Discover the animated introduction of Astria Ascending, introducing the different people living in the city of Harmonia.

The brand new version comes packed with a formidable new chess piece from a mysterious race, a fire-new Big Winner mode, as well as the war-themed Season 14. Plus, PS teaming function will be available soon and you can enjoy the game together with your friends!

Rift Adventure is a 2D platformer of action and adventure and RPG elements with retro pixel art style that seeks to educate and raise awareness of young people, teenagers and also homesick players about tax, tax education, citizenship and the cause and consequence of their actions.

All this in a fantasy medieval universe where all characters are animalized. The protagonist is an adventurer who seeks treasure and excitement, but sees his best friend and adventure partner being possessed and kidnapped by a powerful and evil being from the underworld.

One tiny worm started this war. Now it’s up to us. Let’s kick some ass!

Tails of Iron is out now on PS5 & PS4. An epic RPG Adventure with punishingly brutal combat, play as Redgi, heir to the Rat Throne, as you embark on a perilous quest to reclaim your Kingdom. Explore a deceivingly charming world. Assemble a band of brave companions. Banish the merciless Frog clan... once and for all!

Set off on a delightful expedition and use your photographic eye to uncover the mysteries of the magical TOEM in this hand-drawn adventure game available now on PlayStation 5! 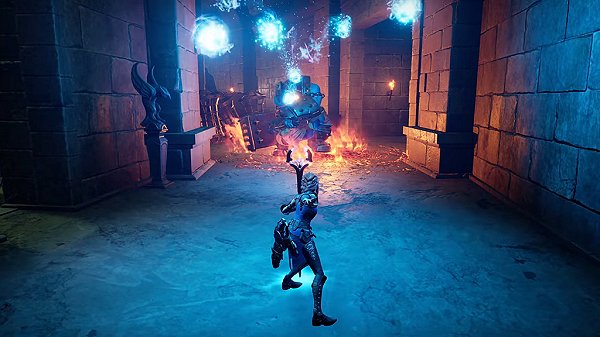