In PS5 News today we have a fresh round of PS5 Gameplay Trailer Videos showcased since our last update for those in the PlayStation 5 Scene to check out below!

Hike, climb, and soar through the peaceful mountainside landscapes of Hawk Peak Provincial Park. Follow the marked trails or explore the backcountry as you make your way to the summit.

Along the way, meet other hikers, discover hidden treasures, and take in the world around you. A Short Hike is available now on PlayStation 4.

You're going to die, but not until you're good and ready. From the creators of the original hit web game series comes an all-new single-player roguelite action-adventure game.

Infected by the affliction that ravaged humanity, you set out to explore the apocalypse and find hope for your fellow survivors. Even like this, you can still make a difference. Don’t give up.

The Last Stand: Aftermath is available now for PS4 and PS5.

RISE AGAINST RUIN - A mysterious and deadly black mist is spreading from the Shadow Isles, and it’s threatening to take over all of Runeterra. Unite a party of League of Legends champions to fight back against Ruination and uncover the secrets of the mist in Ruined King: A League of Legends Story.

Explore Runeterra in this immersive turn-based RPG from Airship Syndicate, now available on PlayStation 4 and compatible with PlayStation 5.

Vaas is back! Become the villain as you step into the mind of Vaas Montenegro from Far Cry 3 and battle your inner demons. Benefit from the Buddy Pass service to invite a friend and play the DLC in co-op even if your friend does not own the DLC. Vaas: Insanity is available now.

The New War is coming. Beginning November 16, prepare for invasion by summoning the Primes of old with the assistance of Foundry Specialist Varzia Dax. With the mysterious power of Aya, the most coveted Prime Warframes, Weapons and more can be yours to wield against the Sentients.

Explore the inspiration behind CONV/RGENCE: A League of Legends Story in this interview with developers Double Stallion Games. Coming 2022.

Wrangle the hands and arms of a weightless cosmonaut and clamber your way through a collection of precarious stellar scenarios where, without gravity, nothing is still, nothing is secure and nothing is ever simple.

Can you unite the free people of Magalan?

Go out there, convince them to fight with us against the Skyands. And do it before it's too late, Beast of Xacor.

Want to be on the NBA 2K22 in-game soundtrack? NBA 2K are partnering with Soundcloud to bring the latest music to NBA 2K22. Join The Search and get your music in NBA 2K22.

We are pleased to announce that Sifu will be released on the PlayStation Store on February 8th, 2022.

We have made good progress on getting our game ship-ready and we are excited to be able to launch Sifu two weeks earlier than anticipated.

To mark the occasion, we have prepared two brand-new gameplay videos that will be revealed today on PlayStation's networks.

We are pleased to announce that Sifu will be released on the PlayStation Store on February 8th, 2022. To mark the occasion, we are excited to share a new gameplay video revealing in-depth information about Sifu's combat system.

Supercross5 is coming! A renewed career, split screen mode, 2 Strokes bikes, improved Track Editor and so much more to experience what it means to be the greatest SX legend. March 17, 2022: mark your calendar.

We are pleased to announce that Sifu will be released on the PlayStation Store on February 8th, 2022.

To mark the occasion, we are excited to share a new gameplay video revealing in-depth information about Sifu's death & aging mechanic as well as the progression system.

MultiVersus is a brand-new, free-to-play platform fighter that lets you team up with or against your friends using some of the world’s most iconic characters including Batman, Shaggy, Superman, Bugs Bunny & more.

Use unique co-op abilities, find your favorite fighter combos, and save the Multiverse!

The wait is almost over. Here’s a little taste of WWE2K22 and 10 reasons why it will HIT DIFFERENT!

Stay tuned for more to come in January 2022.

Unbound: Worlds Apart is a challenging, atmospheric and hand-drawn puzzle-platformer set in a universe where all worlds are connected by portals. You control Soli, a gifted young mage who has the power to open portals and control the unique properties of each world - such as inverse gravity, time manipulation, super strength and more.

Using these newfound skills, Soli must journey across dangerous and mysterious worlds, each brimming with secrets and challenges. You must use every skill Soli has to defeat a ruthless evil that is tearing reality apart while learning the shocking truth behind your world’s collapse.

Your reflexes and twitch platforming skills will be put to the ultimate test in Unbound: Worlds Apart. As Soli you can explore large worlds full of hidden secrets and unlockable skills that open up even more of the map as you progress.

Along the way you will meet many weird, wonderful and devious characters, each with rich backstories and dialogue. By completing their quests or listening to their tales of hope and sorrow, you will learn more about Unbound’s grand universe of worlds and the portals that connect them.

NERF Legends thrusts you into a futuristic, sci-fi world where you’ll come face-to-face with legions of robot enemies and ultimate boss masters.

Armed with a wide array of NERF blasters based on their iconic, real-world counterparts, you’ll thwart formidable enemies while being challenged to pull off the most impressive high-flying trick shots across a series of unique and immersive environments.

Are your NERF skills up to the challenge to become the ultimate NERF Legend? 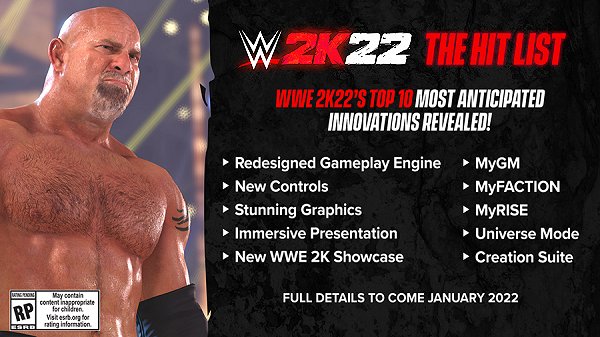 Senior Member
Contributor
Verified
I honestly never heard of almost all of those games.

Member
Contributor
I really hope WWE 2K22 lives up to its hype.

Member
Contributor
Hello there! Nice trailers and hope you all are doing good.