Evil Genius 2 is a satirical spy-fi lair builder, where players take control of an Evil Genius and set their plans for world domination in motion. When it feels this good to be bad, the Forces of Justice don’t stand a chance!

Build your own unique evil lair and cover operation, train a force of criminal minions to defend you’re your lair from the Forces of Justice, and dominate the world with a Doomsday Device in this direct sequel to the 2004 cult classic!
Evil Genius 2 is OUT NOW on PlayStation 5, and PlayStation 4!

Show the world who will be the next MXGP champion! #MXGP2021 is now available. Ready to rule?

Jingle all the way through the HITMAN 3 Winter Roadmap.

From the moment you awakened, all roads have led to this.

The New War heralds Warframe’s most ambitious, cinematic expansion -- and the darkest chapter yet in the conflict against Erra and the Sentients. Embark on an epic Quest across an expansive new adventure, as you race to unite the factions and conclude the most dramatic conflict burning in the Origin System - the one within yourself.

Win the Holidays with NBA 2K22.

A feast for the senses – and the crows. Portrait of a Murder, the new Dead by Daylight Chapter, is out now!

Season 4 is coming to Knockout City...and it’s bringing some new friends. Friends from out of town. Far out of town. You might even say they’re out of this world. ALIENS!

Roll out the welcome mat or warm up your throwing shoulder: Knockout City Season 4: Alien Invaders begins on December 7! It started with whispers of aliens invading our fair city and abducting brawlers.

That was before Police Commissioner Chase and the Knockout City Defense Force were on the case, trying to keep our city safe. Some say that Chase is taking it too far, with too much aggression. And with rumors of black-suited Brawlers making an appearance, it’s hard to keep this tangled web of tentacles straight.

Investigate a new map: the Alien Smash Site at the Overland Farms! And by investigate I mean pelt ‘em with dodgeballs while enjoying the map’s fly new traversal system: UFO Saucers that brawlers can hover around the map, or abduct dodgeballs from below right into their hands.Hope you brawlers like heights: the farm is floating and silos are flying high. They aren’t called Unidentified Driving Objects!

Unlock UFOs as your crew vehicles, and chug down the all new Pom Passer energy drink. Explore the mysteries of the city’s invaders or upgrade your brawler’s look with an all-new, alien-themed Brawl Pass, complete with a new season of Deep Space Dispatches. Rally your Crew and jump back into a new season of League Play, with all-new rewards, and complete your Weekly Crew Contracts for an all-new slate of gear to perfect your Crew’s look.

See you on December 7, Brawlers! There’s friends for the making and wins for the taking!

Challenge all three end-game modes: Lightbringer, Dreamstones, and the Ascended Tower of Trials. Vanquish your enemies and be rewarded with loot worthy of a true Valorian. Loot and slash in up to 3-player matchmade co-op to show your skill, perfect your build, and smash your enemies.

Godfall: Challenger Edition – The endgame is only the beginning.

Get ready to see Kronosaurus and other prehistoric animals in Jurassic World Evolution 2 Early Cretaceous Pack, A World Evolved. Releasing the 9th December on PlayStation 5 and PlayStation 4.

A fateful RPG involving a magical lady and a spirit of a man possessing a dog!

In a world infested with evil beasts called savarians, a girl is on a journey to hunt these dangerous beings. One day she runs into a dog possessed by the soul of a young man. This meeting triggers a further long adventure awaiting only to reveal what is behind the mystery involving the world fate.

Possess looming enemies and summon spirits to support you in turn-based battles with outstanding animations! Take on missions in the Guild to raise your rank, and upgrade weapons to become more powerful. More enjoyment awaits you in this fateful RPG!

Batman fans, this news is for you: the HOT WHEELS - Batman Expansion is now available. You'll go crazy with the new stories of Gotham City, with the Batcave, themed vehicles, and much more. Get it now!

But be careful - carrying too much gold will weigh you down, making you run slower, so make sure to secure it regularly. With several treasures to steal, hidden gold stashes, and stealing from rival Outlaws, this mode blows open the doors of possibility, viable strategies, and surprise epic moments.

A new Battle Pass with 100 cosmetics! Steal both the gold and the stage with the Season 2: Yule Battle Pass. Complete heists to progress through the Battle Pass and collect over 100 new outfits, weapon skins, and banner packs to steal in style.

Get a look at the new DLC campaign for Terminator: Resistance in action! Annihilation Line will be available to purchase digitally for PlayStation 5 on December 10th, 2021.

Jacob Rivers, Kyle Reese, and their team must escape a Skynet ambush, evading a band of machines who are out for their blood - including the terrifying HK Centurion.

It's the most wonderful time for a spectacular dime. Win the Holidays with NBA 2K22.

From the creators of the award-winning Hyper Light Drifter comes the high-speed and gravity-bending world of Solar Ash. Available now on PlayStation 5 and PlayStation 4.

Experience the all-new Horde Mode and add-ons for Quake, free to all players. Grab your guns and drop into Horde Mode - play solo, with friends online, or in local multiplayer split-screen. Unlock powerful weapons and power-ups and battle your way through endless waves of monsters.

DYNASTY WARRIORS 9 Empires is currently in development and will release in North America on Feb. 15, 2022 for the PlayStation 4 and Digitally on PlayStation 5.

DYNASTY WARRIORS 9 Empires adds tactical and strategic war elements to the 1 vs. 1,000 action of KOEI TECMO’s revered DYNASTY WARRIORS series, enabling gamers to take to the battlefield and find success with not only the sword but through a robust political system in their attempts to conquer Ancient China.

The game features scenarios that transport gamers to different periods, enabling them to play through historic moments like the Yellow Turban Rebellion and the Battle of Chibi. But just because you’re playing through historic periods, doesn’t mean you need to follow history in order to be successful.

Re-write your own history of the Three Kingdoms in ways you’ve never imagined, like unifying China with all officers from Wu still alive, or by assembling your favorite officers into one command, or even by sparking a rebellion to take control of the map!

In addition, DYNASTY WARRIORS 9 Empires will receive an upcoming demo before the game launches, in early 2022. In the demo, gamers will be able to experience the new evolved castle sieges, including both invasion battles and defense.

Fans will also be able to try out the full version of the game’s edit mode, enabling the complete creation and editing abilities of new officers in detail before release. The edit officer data can then be transferred from the demo version to the full game as long as you are playing the same platform on both the demo and final product.

Enter a dark new universe and explore epic locations in the highly anticipated Chorus, out today.

Chorus follows ace pilot Nara and her sentient ship Forsaken on their compelling journey of redemption, expertly balancing the spectacle of space exploration with frenetic, fast-paced action. Explore epic cosmic vistas and tight crystalline corridors as you fight to free the galaxy from mysterious cult, the Circle.

The Circle is ruled by The Great Prophet, but not much is known about this mysterious figure. Under his command Nara and Forsaken were responsible for many of the cult’s major victories and atrocities on their path to dominate the galaxy. Once the Circle’s deadliest warrior, Nara is now their most wanted fugitive.

With Chorus, FISHLABS has taken the nostalgic feel from classic space shooters and expertly blended it together with a contemporary mindset, evolving the spirit of these games.


The Dungeon of Naheulbeuk: The Amulet of Chaos PS5 DLC and Next Gen Launch

The Dungeon of Naheulbeuk: The Amulet of Chaos is an epic parody of classic TableTop Games. Take control of a less-than-qualified party of seven dumb adventurers and exploit their strengths and weaknesses to lead them to an unlikely triumph in the wackiest of all dungeons!

The clock is winding down and winter is upon us. But while others prepare for the cold, NBA 2K22 is just starting to heat up.

In Season 3, players will be exposed to new rewards, modes, and a brisk environment. Prove you have what it takes to be a go-to player in the clutch and show that you've got ice in your veins.

It’s a backup’s life for our Legends in the Raiders Collection Event!

Winter Express returns to Apex Legends: three squads board the World’s Edge train, but only one will conquer it! Collect 24 event-limited cosmetics and turn your squad into a backup crew. Get all 24, and you’ll unlock something shocking: Wattson’s Heirloom, the “Energy Reader”!

Apex Legends is a free-to-play hero shooter game where legendary characters battle for glory, fame, and fortune on the fringes of the Frontier. Play for free now on PlayStation 5, PlayStation 4.

Stripping away modern complexities to return to a simpler, more challenging style of gaming, Ball laB is a straightforward precision platformer presented in minimalistic greyscale pixel art graphics. Each puzzling stage fills a single screen, with the objective being to get from one end of the level to another without falling victim to spikes, pitfalls or other hazards.

You play as a ball. You can roll along flat surfaces, bounce to ledges, hop onto platforms or ride elevators to reach your goal. If you hit a hazard, you’ll instantly respawn at the beginning of the stage, adding to your death counter with each attempt.

How many tries will it take for you to clear all 60 challenges? Ball laB is available December 8th for PS4 and PS5.

Then, witness the rise of Miles Morales as the new protector of East Harlem in Marvel's Spider-Man: Miles Morales, featuring electrifying new abilities, unique suits, and an original story from Insomniac Games.

Paradise is a Warzone

The Island has flipped and things will never be the same.

Explore new locations, take on enemies with new weapons and see everything the new Island has in store. Chapter 3 starts now. 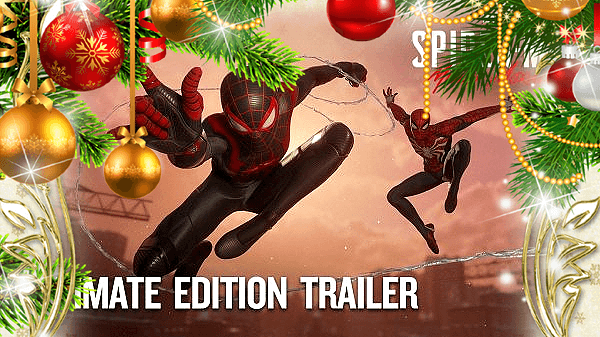