In PlayStation 5 Scene news today the latest batch of PS5 Game Trailers is here featuring Outriders - No Turning Back published by Square Enix among the mid-week selection of PS5 Videos.

Check out all the new PlayStation 5 Game Trailers below!

Hear from the composers of Sackboy: A Big Adventure as they describe the process of creating the theme music for Sackboy.

PlayStation Plus members get a free in-game bundle, inspired by the jungle warfare in Season Two of Call of Duty: Black Ops Cold War and Call of Duty: Warzone. This pack includes:

Enlisted is an MMO squad based shooter set in World War II where you act as an infantry squad leader, tank crew or an aircraft pilot. Join the beta on PlayStation 5 now by purchasing one of the Founder's Packs with premium squads and weapons and storm the beaches of Normandy in 1944 or battle in the outskirts of Moscow in 1941.

Coach & Ramone want to help you own the mound with Pinpoint pitching or strike fear into the hearts of pitchers with new hitting updates. Catch Thursday's Feature Premiere to learn more!

You awake inside the sinister Castle Rock with no way out - were you betrayed, or simply not that clever?

The We Were Here Series is returning with a new co-op puzzle adventure, coming this year to PlayStation!! Do you and your friend have what it takes to face the dark forces of this realm or will you be trapped... forever?


Outriders - No Turning Back PS5 Trailer

In a brand-new animated trailer, we can see how the Outriders journey began, as we follow their expedition to Enoch from Earth.

It Takes Two is the new co-op adventure from the award-winning creators of A Way Out and Brothers: A Tale of Two Sons. Friends join online co-op for free. Pre-order now.

Magically turned into dolls by their daughter Rose, Cody and May are challenged by a cheesy self-help book on love – Dr. Hakim – to fix their broken relationship.

Embrace Your Dark Side with Doodle Devil!

Create 7 deadly sins, Cthulhu, Astaroth and many other infernal things. Being bad has never been so much fun

Aircraft HUD devices and air-to-ground missiles AGM-65A Mavericks have also been added to the game. Finally, the abandoned Soviet military town of Seversk-13 and its environment will become a new battleground.

Take on battles of cosmic proportions in the Campaign Mode, become the best in the galaxy by rising to the top of the Leaderboards, or last as long as your ship can stand it in Endless Mode, and so much more. Curved Space launches June 18, 2021!

Curved Space is an intense arcade-style twin-stick shooter that takes the classic formula and plunges it into the weirdest reaches of space. Battle cosmic space-invading spiders across curved landscapes where bullets hug the terrain while the horizon drops sharply out of sight.

Inspired by arcade classics, players will have to hunt for weapon power-ups and upgrades while dodging enemy fire, blasting interdimensional bugs, and wrangling some enormous boss monsters. Simple to learn as you fight your way through the branching story-driven campaign, but tough to master as you chase the glory of the leaderboards.

Buckle up! Race on 25 circuits in different cities across the United States in several game modes: freestyle, race, destruction, time attack, online mode (up to 8 players) and a career mode!

16 monster Trucks and more than 50 customization options to be the best driver in 25 arenas across the United States!

Monster Truck Championship is now available in 4k and 60FPS on PlayStation 5! 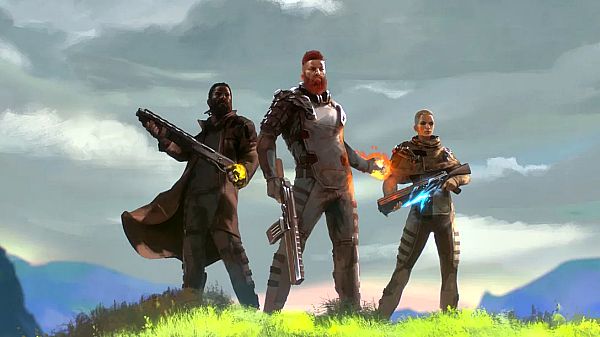 Staff Member
Moderator
Developer
Senior Member
Verified
We Were Here Forever, and Outriders looks good and It Takes Two likes like a lot of fun.

but then again, FF7R DLC is coming out at the same time since GG got delayed

Member
Contributor
Verified
If only I had a ps5