Following the Mednafen PS4 Emulator Demos earlier in the month, this weekend tester @Markus95 (aka @Kus00095) made available via Twitter a Mednafen PS4 PKG Port (mednafen.pkg) by Znullptr (aka dmiller423) who also has a Patreon Page and Github Sponsors Page set up for supporters to follow his work in progress. 🕹

For those curious, the multi-system emulator Mednafen covers the following computers and video game consoles with further notes below on the PlayStation 4 PKG Port:
To quote from his post on Logic-Sunrise.com, roughly translated:

As I announced last week, Znullptr recently shared Mednafen's .self, a multi-emulator that runs on a PC base and can emulate a lot of retro consoles, from the NES. to the PlayStation 1 through the Megadrive, etc...

After a little more than a week of work on emulators, here is a first official version available for everyone. Hang in there because there is a lot of information and explanations in this news...

Remember my 1st news, I told you unfortunately some problems here and there, so today worries with the FPKG are set, it works perfectly, no need for a homebrew annex to launch the .self, the problem on the PS4 Pro is also solved, so Mednafen works on Pro BUT only in 1080p or less. The concern was the resolution of my console set to 2156p which generated a black screen or a Sony error. All PS4 models are therefore compatible with Mednafen.

Unfortunately the concern of KP is still present, rarer than the .self version but still there. Once on average 10 when you leave the emulator you will have this famous KP (Kernel Panic). Another little black spot, for now, emulators are only playable solo, that is to say that the 2nd joysticks are not yet recognized or configured in the .cfg, I am currently working on...

Otherwise in this 1st official version, you will find the 100% functional emulation, the fullspeed, the full screen and the scanlines for the following consoles: NES, Master System, Megadrive, Super Nintendo, PC Engine and PC Engine FX.

Then you will also find the emulation 100% functional, the "fullspeed", the scanlines, but not full screen (possible to adjust it in the .cfg, but I personally preferred to simply enlarge the image because the full screen sting your eyes...) for the following consoles: Game Boy, Game Boy Advance, Game Gear, Neo Geo Pocket and Lynx.

Here is the part that annoys, for the emulation Saturn nothing to do it does not work, we are still looking for the way to run it but nothing is done, despite the settings, the games do not boot. The Virtual Boy and Wonderswan emulation work but it is not possible to configure all the keys of their respective joysticks on our PS4 controllers, so I abandoned their configurations, and finally, the PS1 emulation.

So for the latter, there are some points to clarify, before all the full screen is only oddly possible on some games, and made a black screen on others, so I had to find the right setting of screen to run ALL games without black screen.

Another important point, the fullspeed is only effective on PS4 Pro , indeed on Slim and Fat, the games are playable but jerk a little, as well as the sound. (Comparison of the 2 videos below to see the difference)

Last info, you must have a .cue of your .iso, .img or .bin to launch your game, you create them yourself.

PS4 FAT:
PS4 Pro:
More info on Mednafen, as well as the description of each emulator with their possible config and bios needed here: https://mednafen.github.io/

Here after a fairly consistent news, I want to thank once more Znullptr, without whom this emulator would never have been born, for all those also wanting to thank him do not hesitate to make a donation on his patreon this address: https://www.patreon.com/znullptr which will motivate him to continue his numerous ports of emulators and other homebrew to come.

Mednafen - PlayStation 4 Pro - All Cores
Also heating things up on Twitter today in the PlayStation 2 Scene is an exploit that allows hacking the PS2 and booting homebrew via PAL region demo discs containing Yabasic by @CTurt! 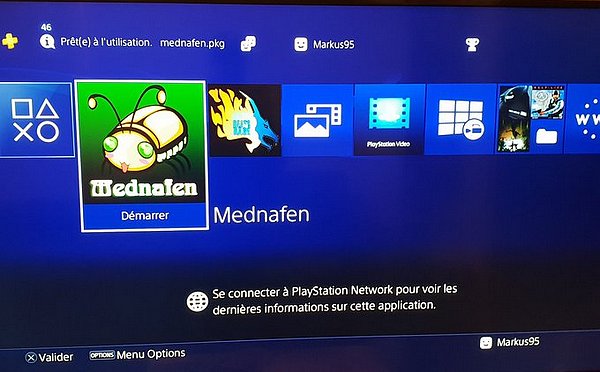 Senior Member
Contributor
Verified
Thank you very much for sharing your work.

Senior Member
Contributor
Verified
Can't wait to try out the emulator, I hope the PSone games can finally save! I have enough psone library to play.