If you’re familiar with Mega Man X, then you’re familiar with his mentor and long-time partner, Zero. Fully playable for the first time in Mega Man X4 on the PlayStation, Zero added a new angle to the classic gameplay formula of Mega Man with his close-range Z-Saber and ability to copy enemy techniques, as opposed to X’s ability to copy their unique weapon systems – a key difference in how each character played. Even after numerous adventures, Zero’s story didn’t end with the events of the Mega Man X games.

If you’re a fan of Zero or the Mega Man X games in general, you’ll want to see where Zero’s story picks up hundreds of years later, beginning with the aptly titled Mega Man Zero. Setting the stage for the revival of the legendary Reploid, join Zero, human scientist Ciel, and Resistance forces in their fight for a better future.

As the events of each Mega Man Zero game unfold, you’ll learn more about the fate of old friends, such as X, and gain powerful new allies. However, along the way you’ll also cross paths with terrifyingly destructive foes like the fearsome Omega and the twisted Dark Elf.

The Resurrection of a Legend

Series fans know Zero isn’t defenseless, of course. Even hundreds of years later, Zero is still an A-Class Hunter and knows how to fight. You’ll need to bring your A-Class skills if you want to survive what’s ahead of you! While ranking was mostly for personal pride in prior Mega Man X games, Mega Man Zero introduced a new ranking system that graded you on how well you played.

When you maintain an A or S rank, bosses will give it everything they’ve got and unleash powerful “EX” moves – which, depending on the game, Zero can copy once he’s defeated his foe! Unlike other Mega Man games, defeating a boss doesn’t guarantee you’ll get a new technique; you'll need to put your skills to the test if you want to earn those abilities!

Fight for the Future

A few hundred years after the events of Mega Man Zero, humans and Reploids now live together in peace at the start of Mega Man ZX. However, a certain megalomaniac’s legacy lives on, and an old threat has re-emerged: Mavericks. When a few rogue Reploids set their sights on a couple of Transporters on a routine job, fate intervenes to set one of them on a brand-new path.

Choose from two playable characters, Vent or Aile, and take on new forms with the help of mysterious living artifacts known as Biometal Model X and Model Z. It's up to you to discover the reason for the resurgence of Mavericks and put a stop to the rise of a brand new villain who wields the nefarious Model W.

Taking place several years after the first game, Mega Man ZX Advent is a direct sequel and introduces a new pair of heroes looking to make their own mark on history while they uncover their past. With two overlapping stories to tell, join either Ashe or Grey as they discover their role as a Mega Man – someone who can megamerge with Biometals, such as Model A – to put a stop to a new threat and maybe understand just who, exactly, they were meant to be.

Expanding on the first game, you won’t just gain new forms from defeated foes; you’ll be able to use the unique ability of Model A, “A-Trans,” to copy their DNA and transform into bosses on the fly, allowing you to use their unique abilities to fight enemies and explore the environment in brand-new ways.

No one said it would be easy, but with a little help from your friends and the skills of fallen foes, you just might be able to put an end to the brutal “Game of Destiny,” designed to pit Mega Men against each other to discover the strongest one of them all.

Take the Edge Off

If all of that seems a bit too intense and you just want to relax while enjoying the story, Casual Scenario Mode and Save-Assist have you covered. Casual Scenario Mode offers the same core gameplay experience while powering up your character and reducing the penalty of spikes and pits from instant death to taking damage instead.

In addition, Save-Assist automatically saves your game mid-mission, giving you a point to restore from if things go wrong or if you’re looking to practice a difficult section or boss. It’s particularly useful if you’re looking to keep your rank high in Mega Man Zero games! Each of these features can be turned on or off for each game, putting the power of how you want to play in your hands.

There's lots more we haven’t covered just yet, including optional visual filters, different screen ratios, and different layouts for the second display that features in ZX and ZX Advent! There’s even more to do beyond the games themselves, with an art gallery stuffed with illustrations, a music player featuring tracks from all six games, and exclusive new songs made for Zero / ZX Legacy Collection.

You can also switch between multiple versions of each game (including the original Japanese releases). Of course, we can’t forget the new Z Chaser Mode that snuck into the end of the trailer – though you'll have to wait a bit to hear more about that.

If you're ready to dive in as soon as the collection is available, you can pre-order now for an additional selection of ten tracks to listen to in-game!

The “Reploid Remixes” include six new remixes of an iconic song or theme from each game, replacing the in-game music with a brand new track made just for Zero/ZX Legacy Collection. You can also listen to an additional four tracks made specifically for the collection via the in-game music player.

To recap, here's what games you're getting in the Mega Man Zero / ZX Legacy Collection:
If you missed these games the first go around, now is a great time to jump in and see what you’ve been missing! Continue the legendary Zero's adventures in the Mega Man Zero games, then join a new generation of heroes on the rise in Mega Man ZX and ZX Advent... and see what ties both series together. Model X and Model Z aren't just random names, after all!

This is the first time all four Zero games and both ZX games will be available on console, so we hope you're looking forward to Mega Man Zero / ZX Legacy Collection bringing all six of them together alongside the Z Chaser mode, gallery and more to PlayStation 4 on January 21, 2020. 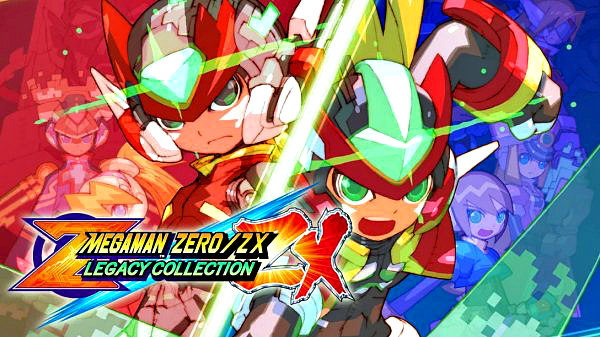