Category PS4 Guides and Tutorials       Thread starter PSXHAX       Start date Feb 8, 2019 at 9:30 AM       18,823       221
Following the recent CreeperDiver / Spelunky Classic HD / Deltarune / Chip and Dale: Remastered PS4 PKG homebrew releases and his GBA Emulator Port for PS4, scene developer @7he D4RK H4CK shared on Twitter a Neo-Geo CD Emu on PS4 tutorial today alongside a video guide from @MasterTurkey based on it via his YouTube Channel for SNK emulation fans!

To quote from his blog at PSMegaHax.BlogSpot.com, roughly translated: Neo-Geo CD Emu on PS4 Tutorial

And from the video's description: This tutorial was created by 7he D4RK H4CK for NeoGeo CD emulation on the PS4. I just followed their instructions and made this video. Essentially like contract work or something. So this is not my work or tutorial, just me following instructions and recording it.

NeoGeo CD emulation is done via the PS2 for PS4 emulator. Audio/Sound does not work currently.
Tutorial for 7he D4RK H4CK's NeoGeo CD for PS4
Cheers to @MasterTurkey for the heads-up on Twitter of this Neo-Geo CD Emu on PS4 news! 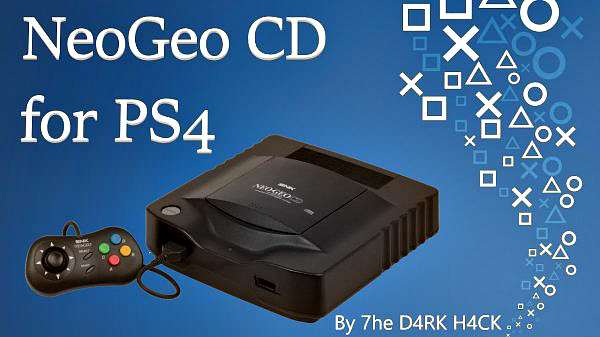 Never played NEOGEOCD before, any recommendations?

Staff Member
Moderator
Verified
If anyone is seeking some NeoCD images, they can be obtained using the following method:

Senior Member
Contributor
Verified
I also made that sweet Icon by the way.

Shout out to 7he D4RK H4CK for letting me do that. Made me feel special.

Main difference between the MVS/AES and the NeoGeo cd, is the latter taking advantage of redbook audio (which is awesome, as all the snk games receive an arrange soundtrack), also taking into account the SNK sound team were the best in the business, during the mid to late 90's (Fatal fury 2 last boss theme uses Mozart' - Requiem).... other than that, the games are identical to their MVS/AES counterparts, albeit with the NeoGeo cd having longer loading times. Regardless, there are some excellent games available on the system and is an excellent addition to the ps4 homebrew scene.

shame this emulator doesn't do sound yet though, as that's the main advantage of neogeo cd over its mvs/aes counterpart.