Following the recently reported PS5 WebKit Vulnerabilities, additional findings and last batch of videos, in PS5News today we have a fresh round of game trailers for those in the PlayStation 5 Scene to check out below!

Across the universe, planets have been blighted by the activity of Titan Worms. These colossal sandworms plough through the desert sands, blacking out the sun as they arc overhead, and defiling the very terrain with their cursed dust.

Travelers on this Expedition will find themselves stranded on planet Wasan, a barren world ravaged by dust storms and infested with Titan Worms. It is up to you to locate the Titan Worm impact sites, destroy the wretched Hungering Tendrils, and collect the Vile Spawn that lingers behind. The vessels of the many mouths must be purged!

As travelers cleanse planets of cursed dust and hunt the titanic sandworms, they will unravel the threads of a dark narrative. Complete the expedition route to reveal the history of a dark cult, and ultimately confront the Atlas with evidence of this indelible stain upon the universe.

Time to show the universe what your band of legendary misfits is made of. You got this. Probably.

Watch the New Weapons of the King trailer of Aeterna Noctis, the challenging 2D Metroidvania that will be released on PS5 and PS4 on 15th December 2021.

Now available native on both PS4 and PS5! Sheepo is a quirky metroidvania platformer featuring a shape-shifting sheep-thing, who must traverse an uncharted planet in order to collect samples of each living species for an intergalactic species database.

Explore a strange planet, collect the creatures you find, and then shape-shift into them to expand your world. Build your own path, chat with the locals, and discover the planets sprawling secrets in this quirky metroidvania platformer.

NBA basketball is back! Get in the game with 2K22 and start creating your legacy. Available worldwide on all PlayStation 4 and PlayStation 5 consoles.

Watch the official StoryTrailer of SuicideSquadGame in 4K. Coming in 2022 to PS5.

People of the Dragon is a brand-new DLC for Conan Exiles, and lets you build and fight for the glory of Nemedia. Raise gigantic Germanic themed castles, go to war beneath the feared dragon banner, and crush your enemies with a brand-new arsenal at your disposal.


Gran Turismo 7 The Starting Line (Behind The Scenes) PS5 Trailer

What does automotive culture mean to you and how can it be experienced in Gran Turismo 7.

They're coming for you... Prepare for the final act of the Seven Deadly Sins - and go deep into the mind of an angry Agent 47! The Season of Wrath takes you back to Dartmoor, where you’ll need to plan, adapt and survive against an onslaught of enemies.

Take them all down to unlock firepower of your own and unleash your wrath. Failure is not an option. Complete all three stages of the new Wrath Termination Escalation and unlock new sin-themed suit and items.

WE'RE GOING ON AN ADVENTURE! Pick your first class

Do you want to

After a successful launch that confirmed its status as the benchmark for rally games, WRC 10 continues to improve with its first free update. Adding the highly anticipated Renties Ypres Rally Belgium, new historical events and cars and improving its Co-Driver Mode!

Take a peek into Sifu's development and our team's collaboration with Benjamin Colussi, Kung Fu master and founder of the Lao Wei San - Pak Mei School.

Disciples: Liberation marks a new beginning for the franchise, allowing players to explore a richly detailed dark fantasy world, fight foul beasts in intricate turn-based combat, take on hundreds of unique quests and foster relationships with an assortment of in-world factions: from a human empire tinged by religious extremism to the dark forces of the undead lead by a mad queen.

Alliances forged, players can build an army and trade hard-earned resources for an assortment of upgrades to their home base. No choice is without consequence and depending on decisions and political alignments, one wrong move could see a deadly domino effect, irrevocably changing the course of their story.

Vampyr, DONTNOD and Focus Entertainment’s narrative-driven action-RPG, received a free upgrade to its graphics on PlayStation 5 and PlayStation 4 PRO that significantly improved the experience across the board.

Play at up to 1440p and 60fps ! Learn everything there is to know in today’s Trailer!

Grand Theft Auto: The Trilogy – The Definitive Edition will be available digitally on November 11 through the PlayStation Store, with a physical release for PlayStation 4 on December 7.

Today, all hell breaks loose in House Of Ashes, now available on PlayStation.

Inspired by Battlefield’s traditional Classes, Specialists have a unique Speciality and Trait that defines their playstyle, with the rest of the loadout being fully customizable.

Select your role on the battlefield and build your squad through the new Specialist system. Choosing and equipping your Specialist allows you to build synergies within your squad and empower your team to take on any battle situation!

Journey through a series of unique and puzzling vignettes that unfold into a deeper abstract narrative!

Sleep has the power to transport us to wonderfully enigmatic places, sometimes frightening and often unexpected. Lucid Cycle is an exploration of the concepts and experiences common to our dreams, whether it’s solving environmental puzzles without a clear purpose or journeying through a shifting landscape without knowing the final destination.

Sometimes we might find ourselves in familiar places with unfamiliar circumstances or vice versa, but is there a greater meaning behind it all?

Presented in a first-person perspective, Lucid Cycle casts you as the dreamer, exploring a series of short yet vivid scenarios. Make sense of each to transport yourself to the next scene.

You may need to locate a hidden object, leap across platforms suspended in space or retrace your steps to find your way forward. None of these vignettes are the same, but they’re all paint on the same tapestry. Lucid Cycle launches this week for PS5 and PS4.

Meet Polina Petrova, a soldier not by choice but by a need to defend her country, who becomes an infamous sniper of legend.

Fight as, and alongside, Polina in both the single-player Campaign and in Multiplayer on November 5.

Meet Daniel Take Yatsu, a protector who uses his markmanship to support his fellow soldiers. Fight as Daniel in Multiplayer on November 5.

Meet Arthur Kingsley, the heart and leader of Task Force One. Fight as, and alongside, Arthur in both the single-player Campaign and in Multiplayer on November 5.

Meet Padmavati Balan, a character who is defined by the duality between fighter and peaceful civilian. Fight as Padmavati in Multiplayer on November 5. Pre-order Call of Duty: Vanguard today.


Battlefield 2042 What A Time To Be Alive PS5 Trailer

In the near-future world of 2042 chaos is the new mother of invention. You will need skill, ingenuity, and raw guts to survive. Ride a tornado into battle, bring an ATV to a gunfight. Get ready to squad up, gear up, and join a fight like nothing else you've ever experienced.

Battlefield 2042 is made up of three distinct multiplayer experiences - All-Out Warfare features the next generation of fan-favorite modes Conquest and Breakthrough; Battlefield Portal allows players to discover battles from the past, present and future as well as to creating and change the rules of war; while Battlefield Hazard Zone brings a tense, squad-focused survival experience.

Adapt and overcome on dynamically-changing battlegrounds with the help of your squad and a cutting-edge arsenal, and prepare for unprecedented scale with up to 128 players.

Don't miss a second of the action – pre-order Battlefield 2042 and be ready to deploy on day one. 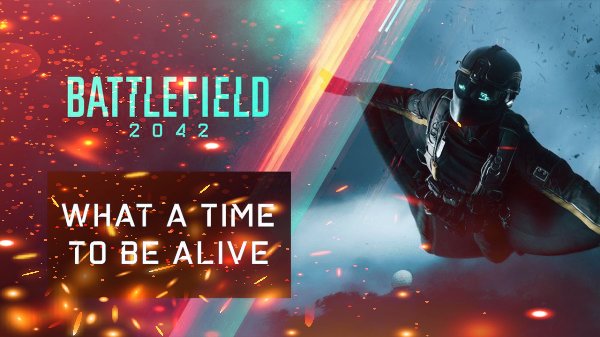 Senior Member
Contributor
Verified
Suicide Squad Game will be awesome, from now i love it.