Set a young man’s soul free from the torment of endlessly repeating death!

Follow the journey of Wyatt Heyll, a young man stricken with a multitude of ailments from an early age. On the verge of death, Wyatt’s parents administer a paranormal substance known as the Sorrowvirus, which contaminates the human soul and prevents it from passing on to the afterlife.

This causes a subject to fall into Purgatory instead, where they can heal and return to life. However, every time Wyatt comes back, his cancers and illnesses return more quickly than before.

Wyatt's parents allow him to continue dying over and over while they perform research on organic particles found in Purgatory that may cure him once and for all. Having died so many times, Wyatt simply wants to let go.

Your objective is to set Wyatt free from his everlasting torment. Navigate haunting environments in first person, solving puzzles and discovering clues to unravel Wyatt’s tragic tale. With four endings in sight, only one is the true path.

Experience The Sorrowvirus - A Faceless Short Story for PS5 and PS4 on April 27th.

RESEARCH and DESTROY is out now! Take control of three brilliant Super Scientists as you RESEARCH and develop strange new weapons and gadgets to DESTROY the Supernatural hordes that have all but crushed humanity in stylish TURN-BASED ACTION.

Bloodhunt is a thrilling free-to-play battle royale game set in Prague consumed by a ruthless war between vampire clans.

Use your supernatural powers, weapons, and wit to hunt your rivals and dominate the night!

Discover the magic that memories hold as you embark on an enchanting journey, and explore rich stories in a village of your own design, alongside some of Disney and Pixar’s most beloved characters in this new life-sim adventure game.
Welcome to Disney Dreamlight Valley.

The Stanley Parable: Ultra Deluxe is out now on PS5 and PS4!

The Stanley Parable: Ultra Deluxe dramatically expands the world of the original game with new content, new choices, and new secrets for you to uncover.

Contradiction follows contradiction, the rules of how games should work are broken, then broken again. You are not here to win. The Stanley Parable is a game that plays you.

Showdown is finally open! Jump into the Showdown Arena, team up with your friends, and take on the competition. Check out the trailer for all that is to come in the next season of Riders Republic!

Sci-fi adventure Exo One is coming to PS4 & PS5 this summer!
Exo One began five years ago with a relatively simple idea about using gravity as a movement mechanic, and gradually grew into something strange and special, inspired by developer's love for sci-fi cinema and games that moved him emotionally.

The game supports 120 FPS and the Haptic Feedback feature when using DualSense Controller.

The Isle of Bigsnax is finally here! Journey to a mysterious new island where the Bugsnax are truly enormous! You’ll need to master new mechanics like the Shrink Spice, which can cut the giant Bugsnax down to a catchable size.

Joining you are Chandlo, Floofty, Triffany, and Shelda, who will explore both the island’s long-forgotten history, and more of their own personal stories.

In SpellForce III Reforced, the Journey Mode is coming to Eo. Experience a new way to play the RTS & RPG hybrid with these untold tales of SpellForce. Create your own hero and play with up to three friends or challenge them in epic PvP matches.

The Knight Witch is a metroidvania adventure game with fast-paced, shoot 'em up combat set in a beautifully hand-drawn world.

Cast devastating card-based spells, forge close bonds, and make moral choices all in your quest to save your home and discover who's behind the War Golem invasion.

Play as the Devil, find artifacts with legendary powers, and regain your former strength to take revenge on the Demon Hunters in Rogue Lords, a roguelike in which cheating is part of the game.

Cult of the Lamb

These are just three of the can't-miss indies coming soon to PlayStation.

With the releases of the Shock & Awe, Boulevard, and Horde Mode updates, After the Fall’s Frontrunner Season has brought a total of four maps, a new type of Snowbreed, free-for-all PvP mode, Horde mode, lots of player skins and plenty of new arsenal to face the Snowbreed with.

Take on Snowbreed with the Tommy Gun, Shockwave Power Device and more.

Farm the dead to stay alive in DEADCRAFT, the newest deadly and daring game from Marvelous' First Studio, creators of DAEMON X MACHINA.

Developed and published by Sharkmob from Malmo, Sweden.

Power, wealth, immortality, at one point or another, Galeb has had it all. He's travelled the world, amassed a fortune, and established himself as one of the oldest and most feared Vampires in the city of Boston.

And yet, he's left wanting, grasping for something he's lost. Or perhaps something that was never there to begin with.

Make choices that will define the future of Boston in Vampire: The Masquerade - Swansong coming to PlayStation 4 and PlayStation 5 on May 19th.

Build your Dream Team in NBA 2K22 MyTEAM with all-new Glitched Packs. There's 9 new Glitched cards for your MyTEAM including:
Available for one week.

Facing relentless pursuit, Charlotte and Victor Deshayes dream of refuge beyond the sea. David King faces an emotional dilemma that neither fisticuffs nor endless pints can solve. As a mysterious group approaches his tower, The Observer receives a bleak reminder that every story has an ending.

Tome 11: DEVOTION includes Memories from:
Witness the Auris, a device capable of peering into the memories of those who have entered the Fog. Through it, the mysterious Observer grants players access to a new series of challenges to complete, designed to help piece together these memories as well as his role within the Entity’s Realm.

Dead by Daylight is a multiplayer action horror game where one player takes on the role of a brutal Killer and the other four play as Survivors. As a Killer your goal is to sacrifice as many Survivors as possible. As Survivors your goal is to work together to evade, escape, and most importantly – stay alive.

Dandy and Randy is a 2D top-down old-school game featuring two of the worst archaeologists that have ever graced the Earth.

Dandy and Randy are a couple of archaeologists who are in a pickle. They owe a ton of money to their bank, and they need a way to pay it back, or they are done for!

Luckily, they have just received the information about a mysterious, fabled precious stone showing up on a faraway island.

Can they find it, pay back their debts, and at the same time become rich? It's up to you to find out!

Play now and get a free NBA Basketball! Get ready to hit the court as the NBA teams up with Rec Room! Be a part of the action like never before as the NBA Playoffs take flight!

Celebrate the best players from around the world across the 2021/22 season with Team of the Season in FIFA 22 Ultimate Team.

Eldest Souls is out now on PlayStation 4 & 5. The critically-acclaimed action-RPG now includes ‘Depths of the Forgotten’: a free, major expansion which introduces a new and perilous region, three new bosses, a selection of special weapons, and an all-new, obliterating ability.

Own The Show. MLB The Show 22 is now available.

Get medieval on some stones in a puzzling quest of epic pixel art proportions!

Block-sliding brain teasers get a fantasy adventure twist in Slap the Rocks, a retro puzzler where you play a medieval treasure hunter with a sword and a penchant for knocking stones around!

Presented in top-down pixel art style, Slap the Rocks features 30 levels to explore, each with a maze of stones, bushes and stumps, where your objective is to hit and slide the white rocks into holes to create a path to reach a treasure chest!

Slap the Rocks for PS4 and PS5 launches on May 4th.

Raven's Hike is a 2D precision platformer, challenging game that requires the player to discover the best route to finish the levels that have a little bit of puzzles, which all movement is based on the main character grappling hook.

Prepare your platform skills (and your grappling hook, of course) to enjoy this amazing experience.

Developed by Wired Dream Studio and published by QUByte Interactive.

Castle Formers cleverly combines platform action with castle defense to create original and dynamic gameplay. Choose to control a king or queen and defend your beloved castle from invading hordes.

Every day you have the opportunity to build your defenses, train soldiers, and prepare magic spells. Then, every night the battle begins! To overcome the invaders, you’ll have to navigate and interact with NPCs and build up your castle defenses.

Cut plants, hunt, find treasures, form an army, upgrade your weapons, prepare food, and cast spells. When the sun sets, defend your castle at all costs.

Can you discover the best way to battle, find secrets that will allow you to survive 30 days, and ensure the survival of your kingdom?

Take control of the last spaceship of the Landers in the action adventure platformer packed with epic cow boss fights, witty puzzles and intelligent enemies!

Use your Milk Shield, Milk Saber and other milk-based technology weapons to conquer the challenges of Moo Lander and help your civilization survive.

Download and try the Moo Lander Demo on PlayStation 4 now and try to win against the Mighty Ancient Cow bosses or even play as the cow in the couch multiplayer modes with your friends.

Moo Lander is releasing in Spring 2022! 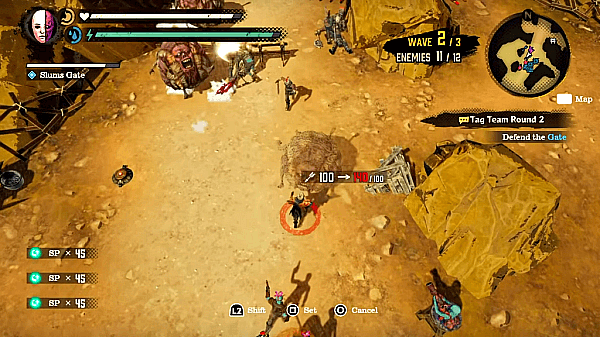