While many in the PS5Scene are still struggling to Acquire a PS5 Console, a Lighter PS5 Model CFI-1100B with an upgraded stand alongside internal changes including a redesigned fan and smaller heatsink contribute to the 0.3 KG (0.6 LBS) weight reduction according to a report by Austin Evans of the PSReady YouTube Channel.

Although Sony previously confirmed the PS5 Fan Will Receive Optimization Software Updates during the PlayStation 5's lifecycle, for those who can't afford a Water Cooled PS5 Console it may be time for another PS5 Thermals Analysis with a brief summary of the new PS5 model's changes from the Tweets embedded below:

Has a slightly redesigned fan

To quote from TheVerge.com on the New PS5 Lighter Model with Smaller Heatsink Teardown:

"The new heatsink is significantly smaller than the original, and makes up for the entire weight reduction of 300 grams (0.6 pounds), according to Evans. It’s not clear why Sony has swapped out the heatsink so early on in the PS5’s lifecycle, but Evans does note that his particular unit ran hotter as a result — with rear exhaust temperatures around 3 to 5 degrees higher. That could be down to manufacturing variance, though."

Based on austinnotduncan's feedback of the new PS5 CFI-1100B Model revision, although less expensive to produce, due to the reduction in cooling capability it may make Launch PS5 Models (CFI-1015A with disc drive or CFI-1015B driveless) more desirable... just when buyers were hoping PlayStation 5 Scalpers would ease up, perhaps with the Redesigned PS5 Model CFI-1115A with 6nm AMD CPU slated for 2022.
The New PS5 is Worse

A Closer Look Inside The New PS5 Console... 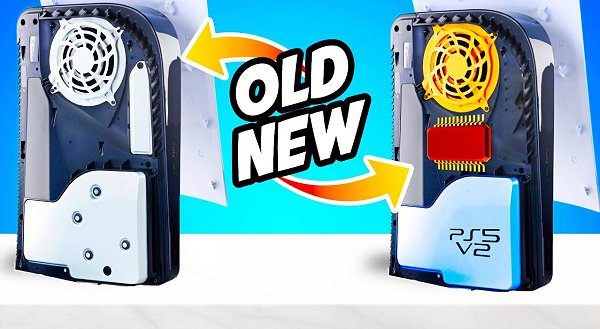 Member
Contributor
Verified
its okay, i cant get hand on any ps5 at normal retail price yet.

Senior Member
Contributor
Verified
Well.... This only benefits scalpers.
Now they can charge an extra 300 bucks for the lauch console.

Senior Member
Contributor
Verified
It doesn't mean anything to me. I am very happy with my first generation of PS5.

Senior Member
Contributor
Verified
I have the new version, friend has launch, we can't tell the difference when gaming. Also I have ran my PS5 for hours straight gaming, I never heard the fan kick in.

What I don't like about Youtubers is they instantly slate Sony decision on smaller heatsink.

For all we know it was large to start because they feared over heat, with the PS5 being stable, they could shrink the heat sink. Parts and materials are hard to get at the moment, this decision helps others.

Senior Member
Contributor
Verified
ya... make a heat sink smaller...? I think that's dumb. I'd rather have something bigger and clunkier that WON'T over heat and die eventually. Not that I'm buying a PS5 anyway... way too expensive for what you are getting.

Senior Member
Contributor
Verified
I see what you are saying, but it's not dumb in a logical way.

Car manufacturers do it, from the cars body to nuts and bolts. This would mean people wouldn't buy cars because its lighter and less material meaning its not safe as the other version thats heavier?

Sony have made a lot of mistakes in the past, I highly doubt they would take such a risk. They would have done a lot of testing before being sent out due to the demand.

Edit: Looking at the heatsinks side by side, the new design has larger copper pipes and smaller fins plus some removed heatblocks, this will also allow for better airflow inside the system due to negative air pressure.

To only be 5c higher, thats pretty good, 54c isnt bad for gaming, it was 65c+ id be concerned.

VIP Member
Senior Member
Contributor
Verified
I rather to keep my fat v1, better chances to jailbreak. What about the slim v2? nope, Thank You!!!!

Member
Contributor
Verified
YLOD anybody? Next firmware update comes with a fan speed reduction to lower noise right? And 1 year from now we have a bunch of dead Ps5 from BGA failures with the owners coughing up more dough for new Ps5's.

Smaller heatsink is bad business, especially considering the Cpu/Gpu/Apu is still the same. If they had moved on to a smaller die size, downsizing the heatsink to save costs would be understandable.

Am a PlayStation fan but XbSx has impressed me with its massive copper heatsink and Sony's answer to that is downgrading to a smaller heatsink.

Senior Member
Contributor
Verified
This is a more reasonable break down of the new system.

A Closer Look Inside The New PS5 Console...