Here's the third of @noob404's recent PS4 downporting apps, following his 1Click PS4 Batch Downporter from earlier today the Noob404 1Click Downport Patch Maker is used to downport small PS4 PKGs (under 300 MB) with a Ko-fi Page for those who'd like to support his work and further details below from the Noob404.com release page:

I released a 1Click PS4 Batch Downporter recently. This enabled you to have downported PKGs for multiple PKGs in just one click. But the downported PKGs have a size similar to the non-downported fake PKG. Here’s the solution to the problem.

It’s known that you’d create small downport patches for PKGs. With that, you could downport PKGs for 5.05 with patch PKGs under 300MB. With Noob404 1Click Downport Patch Maker, it’s easy to create downport patches in just one click.

Pre-requisites
Disclaimer: I or Noob404 don't condone backups. This is purely an educational article. What you do with your PS4 is your responsibility. Continue at your own risk.

How to install downport Patch on PS4
Conclusion

If you have any suggestions to improve the tool, please leave them in the comments below. Or, hit a roadblock? Comment below and I will help you out. 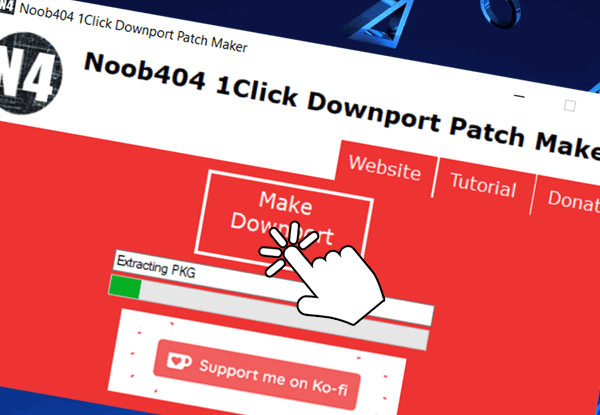 Member
Contributor
Verified
Thank you so much !!

Senior Member
Contributor
Verified
who got the link for this

Member
Contributor
How to get changeinfo.xml, thank.