Following his EZ PS4 Downporter PlayStation 4 developer @noob404 kicked things up a notch on Twitter today and released Noob404's 1Click PS4 Downporter to downport PS4 games from 6.72 to run on Jailbroken 5.05 Consoles in one click alongside a video from his YouTube Channel below!

If you enjoy his work feel free to drop by his Ko-fi.com Page to get him some coffee, and to quote from his latest update on Noob404.com:

A few days ago I had released my EZ PS4 Downporter. It was mostly automated requiring manually copying prx files. But, today I give you Noob404 1Click PS4 Downporter – an automated Downporter program to downport PS4 games in just a click.

Pre-requisites
Disclaimer: I or Noob404 don’t condone backups. This is purely an educational article. What you do with your PS4 is your responsibility. Continue at your own risk.

With the latest version, everything has been automated and you don't even have to press on any key to exit CMD, as in the earlier versions. So, enjoy!

Changelog: Noob404's 1Click PS4 Downporter v3
There are only three steps as it's similar to v1:-
That’s it. When done, a final command window will show the progress and exit automatically. You will find your downported PKG in the Output Folder.

Clicking on Clear all Folders will clear all folders – Input, Output, Working.

You guys have been facing a few issues with running the program. Some have reported empty Output folder, the “missing path” error, etc. All of these are either because of Windows errors or because of the files being deleted, detected as false positives by A/V programs.

Here are a few things you could try. I also talk about these fixes in the video. So, you may also watch that.
And from Fix_for_Path_not_Found_Error, to quote: Fix for Path not Found Error

Some of you have reported an error where the program starts and says path not found. I have found the issue and here’s the fix you need to apply:-

1. Extract the Original Downporter into a folder.
2. Replace the file Noob404 1Click PS4 Downporter v3.exe in the extracted folder with the one in the Fix Package.
3. Enjoy!

Copy the compiled PKG to a USB drive (formatted as EXFAT ot FAT32). Run HEN on your PS4 and install the game from Debug Settings as you would usually do. 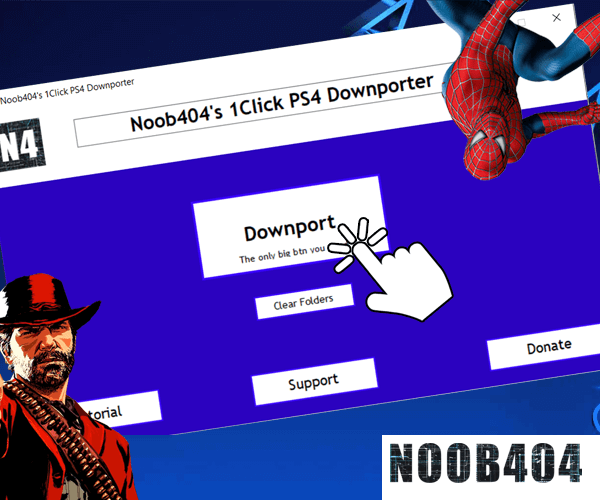 Senior Member
Contributor
Verified
Does it work with DLC pkgs?
Good job by the way

Developer
Senior Member
Contributor
@eliuuuu7 Not yet. Working on it next!

Developer
Senior Member
Contributor
@Grimmjou7 They require certain additional steps. Will add them to the software once it becomes available.

Member
Contributor
Verified
What HEN version do I need? I'm using 1.8, do I need to update?

I don't see an INPUT subfolder in your folder

Developer
Senior Member
Contributor
Please let me know if there are any errors, I will try have them fixed today itself.

@mazinas Start the program exe and it will create an Input folder.