He also confirmed that PlayStation VR support will be coming in a post-launch update with a trailer video and details below, to quote:

Obduction is a gorgeous, mesmerizing, unique, and immersive experience in some very strange worlds. You don’t shoot things. Heck... you don’t die at all (well, maybe that’s not completely true). The game begins with you enjoying a nighttime stroll along a beautiful mountain lake, but very quickly a streak of light breaks the calm.

A strange organic artifact falls from the sky, approaches and takes you away from Earth to a new world named Hunrath. Hunrath is a strange conglomeration of pieces of Earth from various time periods mixed in with alien technology.

There’s even a message from someone at the beginning that seems to imply that this has happened to others, and they all live here happily – but something about the place doesn’t seem to jive with that. It’s too quiet, and empty, and... eerie. As you wander and explore you start to unravel the story – and find a way to “make it home.”

Making Obduction was quite a challenge. It’s taken our extremely talented team several years to take the concept from a Kickstarter project to the critically acclaimed title it has become. Creating a game with both traditional and VR experience meant that we had to consider VR in our design work before there were any VR headsets available.

But we were determined to build an amazing gaming experience that provided not just a satisfying experience for PS4 players, but something that felt like a full VR game instead of a small demo for PSVR players. Preorders are available here. 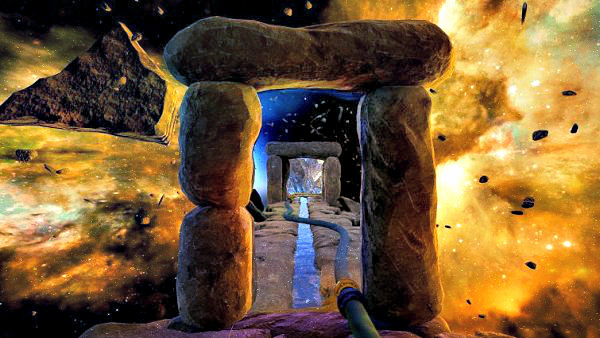