Below are details on their PS Classic findings alongside some PlayStation Classic teardown pictures courtesy of EuroGamer.net, to quote:

"What hardware is inside the PlayStation Classic and what it makes it tick? It's something we've been fascinated about since the project was announced. Initially, we wondered whether Sony might have returned to its PlayStation Vita SoC - a proven performer for original PlayStation emulation.

However, the platform holder has opted for an ARM SoC set-up - and one that's a good chunk more powerful than the internals of the NES and Super NES mini consoles.

Of course, Nintendo was dealing with far less capable hardware than the PlayStation for its mini-consoles - but the fact is that hackers have managed to install and run PS1 games on the Nintendo kit, albeit with varying levels of success.

Sony has opted for a quad-core ARM set-up that also integrates a PowerVR GPU - although the utilisation of GPU acceleration in the PlayStation Classic is likely minimal. The SoC in question is also paired with 1GB of memory, along with 16GB of flash storage.

With the console in hand and initial tests completed, we decided to dismantle the unit to get an idea of the design decisions Sony made in putting together its latest hardware release. It's got to be said that the look and feel of the PlayStation Classic is genuinely authentic - obviously it's a lot smaller, but it looks right and even the plastics chosen seem like a fairly close match for original hardware.

Once connected up via USB, the power button turns the machine on, while the reset button drops you out of gameplay and back to the front-end. The open button has a job to perform too: it's used to 'swap discs' in games that originally shipped on two or more CDs.

Opening up the PlayStation Classic is a piece of cake. Five screws on the base of the device hold the two halves of the replica casing together. A cross-head Phillips screwdriver is all you need to gain entry to the innards - there are no troublesome Torx screws or glue to contend with. A label on the underside of the machine gives the PlayStation Classic a SCPH-1000R model number, a nod to the original PlayStation's SCPH-1000 designation. 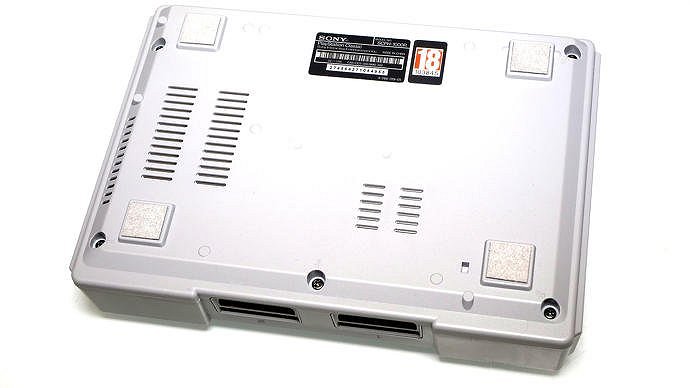 Removing the bottom half of the casing gives us our first look at the board inside. Not surprisingly, this is a custom design by Sony Interactive Entertainment, labelled as such. Four shorter screws hold the PCB in place, and again, they're very easily removed, allowing you to pull the mainboard away from the casing. 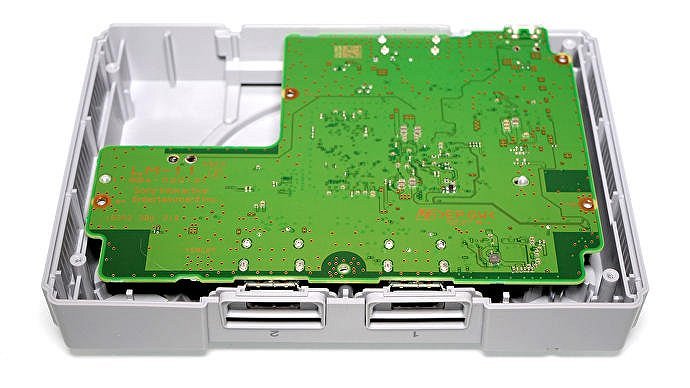 Here's a look at the inside of the top part of the casing. The 'stalks' inside attach to the PCB with a friction fit. The controller ports are USB, with plastic 'tabs' that fall out when you pull the console apart. They slot back in easily enough when you put the device back together again. 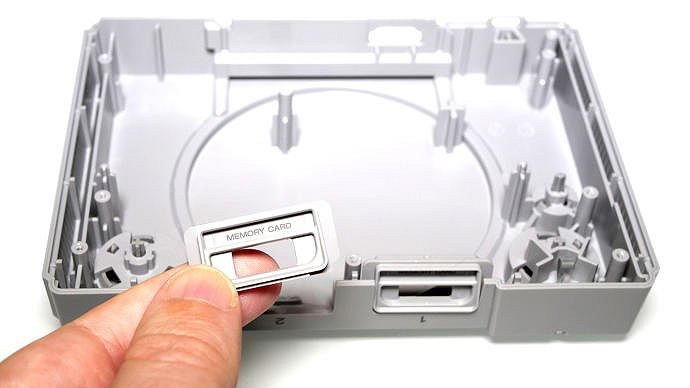 Here's a look at the liberated mainboard, the two USB controller ports at the front and the HDMI port and micro USB power input at the bottom. The metal shroud here doubles up as a heatsink, the depressed centre section attaches directly to the main processor, dissipating the very small amount of heat generated by the chip. 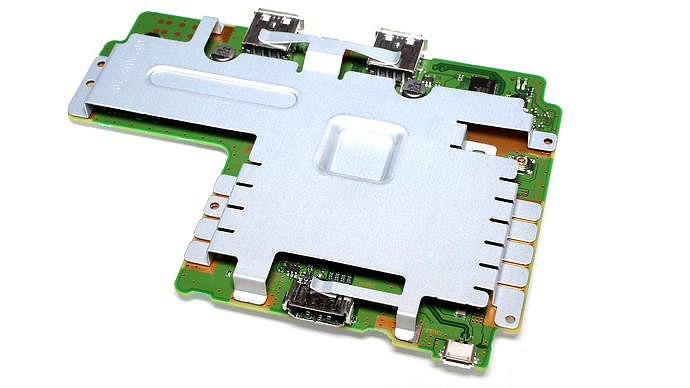 A look at the PlayStation Classic's PCB. The main SoC is in the centre, flanked by two DRAM modules. To the left you'll see the eMMC NAND flash memory used for storage - this is a KLMAG1JETD chip from Samsung, which seems to be a 16GB module. That's plenty for the 20-game selection, OS and emulation code. 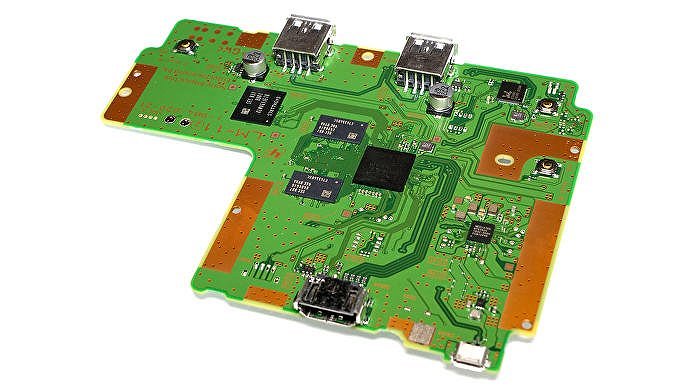 Here's a closer look at the board. The heat sink has taken off most of the print on the main processor but enough remains to tell us that it's a MediaTek MT8167A, which uses a quad-core ARM Cortex A35 running at 1.5GHz paired with an integrated PowerVR GE8300 GPU. This is entry-level stuff by today's standards but should offer more than enough horsepower to deliver full-speed PS1 emulation. 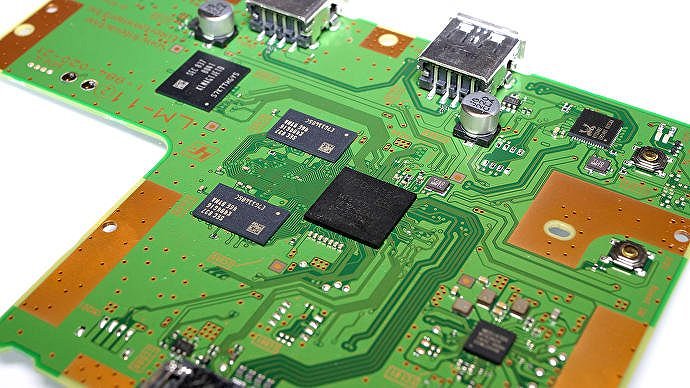 A closer look at the board reveals that the MediaTek SOC is paired with 1GB of DDR3 memory. In common with the storage, this is provided by Samsung, with a K4B4G1646E-BYMA model number.

The two chips offer four megabits (512MB) each, and operate at an 1866MHz frequency. This is quite a boost over the 256MB of DDR3 found in the NES and SNES mini consoles.

Overall then, Sony is fairly generous with its specification here bearing in mind the task at hand. The MediaTek processor is an entry level SoC that hasn't found widespread use, its biggest claim to fame being Acer's processor of choice for its value-orientated Iconia One 10 tablet.

The ARM Cortex A35 CPUs are primarily designed for less demanding tasks, making them a good fit for emulating a vintage 1994 games console - all of which makes the sub-par performance of the device rather mystifying.

Based on what we're seeing here, PS1 emulation should be easy enough for this level of hardware to execute, so attention must turn to the quality of the software. We'll be reviewing the PlayStation Classic in more depth soon."

PlayStation Classic - 20 Legendary Games
Cheers to @BwE for the heads-up on this news earlier today!

Senior Member
Contributor
Nice with the hefty specs ...hmmm possibility of running other emus is plausable... cant wait to see how this comes about with the scene devs... thanks for the post !!!

Staff Member
Moderator
Contributor
Verified
I added a POLL to this thread... place your votes!

Staff Member
Moderator
Contributor
Verified
We won't give you backwards compatibility, so buy this brand new console instead!

Senior Member
Contributor
It's been a long time since I ran pcsx, but something was wrong with the audio decoding at one point to the effect that the audio was barely passable. At best, the sampling was just O.K.

Senior Member
Contributor
Heard they used some PAL ps1 games on it and theres some slowdowns ...25 years and they still couldnt create there own emulator nor have juicy features ...like these mini consoles should sell 2 variants one pre loaded and another where you cab add your own isos... like such a disappointment not that i wouldve purchased it but with a 25 year gap and thats the best they could come up with someone in development department should be FIRED... lol

Member
Contributor
That board is sexy!