PlayStation Plus Free Games in March 2020 for PS Plus Members

PS4 News       Thread starter PSXHAX       Start date Feb 27, 2020 at 9:46 PM       3,796       5
Headlining the free PlayStation Plus games in March are Shadow of the Colossus and Sonic Forces for PS Plus members, with a weekend trial of the intense asymmetrical multiplayer experience Predator: Hunting Grounds starting on Friday March 27th!

Here are further details on each from Sony Senior Manager of Game Services Content Adam Michel, to quote:

Shadow of the Colossus

Tales speak of an ancient realm where Colossi roam the majestic landscape. Bound to the land, these creatures hold a key to a mystical power of revival — a power you must obtain to bring a loved one back to life.

Shadow of the Colossus is a breathtaking journey through ancient lands to seek out gigantic beasts. Armed with only a sword and a bow, explore the spacious lands and unearth each Colossus, presenting a unique challenge to test your wits, determination, and skill.

In Sonic Forces, the evil Dr. Eggman has conquered much of the world with help from a powerful and mysterious new villain named Infinite. Now, you must assist Sonic and build an army to reclaim the world as they fight against chaos and destruction.

Defeat enemies with blazing speed as Modern Sonic, catapult past perilous platforms as Classic Sonic, and create your very own Custom Hero Character equipped with a variety of powerful gadgets.

PS Plus members will be able to try out intense asymmetrical multiplayer experience Predator: Hunting Grounds this month with a weekend trial starting Friday, March 27!

Squad-up with friends as part of a Fireteam and take on dangerous missions before the Predator finds you — or become the Predator and hunt your prey.

Wield human and alien weaponry in this intense asymmetrical multiplayer experience, unlocking iconic gear and skins as you level up. You can even team up with friends on PC with full cross-play support through the Predator: Hunting Grounds trial. 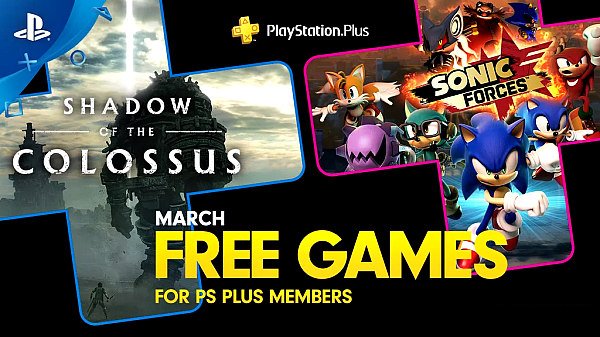 Looking forward to the play Sonic Forces and Predator.