PlayStation Plus New PS4 and PS5 Games for December 2021

Below are all the details courtesy of SIE Senior Manager of Game Services Content Adam Michel, to quote:

December’s PlayStation Plus lineup sees you battling through bright fantasy universes and grim worlds shattered by zealous foes. It asks you to play the hero or see yourself become the villain.

You haven’t long to wait in deciding to lose yourself to the looter-slasher hybrid of Godfall, the careful combat of Mortal Shell, or play bad in Lego DC Super Villains: all games will be available on Tuesday, December 7 until Monday, January 3.

PlayStation Plus members will have until Monday, January 3 to add those titles, plus three bonus PS VR games to their game library. Let’s take a closer look at each game:

Godfall is a looter-slasher set in a bright fantasy universe filled with heroic knights and arcane magic. Embark on adventure in a fantasy action RPG that utilizes high-impact third-person melee combat to engage players as they hunt for loot, don legendary armor sets and defeat vicious enemies.

The Challenger Edition focuses on three unique modes: Lightbringer, Dreamstones, and the Ascended Tower of Trials. All three are endgame-level content, but you’ll be immediately equipped with a spread of deadly weapons and skill points, letting you team up with up to two other players in co-op.

Perfect your build and smash your enemies. Challenger Edition’s endgame co-op is compatible with all upgraded editions of Godfall & supports cross-gen play. Godfall: Challenger Edition players can upgrade at any time to the Deluxe Edition gaining access to both Godfall and Fire & Darkness campaigns.

It’s good to be bad... Embark on an all-new DC Lego adventure by becoming the best villain the universe has seen. Players will create and play as an all-new super-villain throughout the game, unleashing mischievous antics and wreaking havoc in an action-packed story.

Set in an open world experience within the DC universe, the Justice League has disappeared, leaving Earth’s protection to their counterparts, who have proclaimed themselves as the ‘Justice Syndicate’.

It’s up to you and a crazy group of misfits to uncover the intentions of Earth’s new, strange, wannabe superheroes. Joined by renowned DC Super-Villains: The Joker, Harley Quinn, and countless others from the Injustice League, players will set out on an epic adventure.

Mortal Shell is a ruthless and deep single-player action-RPG that tests your sanity and resilience in a shattered world. As the remains of humanity wither and rot, zealous foes fester in the ruins.

They spare no mercy, with survival demanding superior awareness, precision, and instincts. Track down hidden sanctums of devout followers and discover your true purpose.

Continuing from last month and as part of PS VR’s 5th anniversary, three bonus PS VR titles are still available to add to your game library. Survive the horrors aboard a procedurally generated spaceship in The Persistence, tackle zombies in The Walking Dead: Saints & Sinners and showcase your sword skills in roguelike Until You Fall.

These three games are available until Monday, January 3.

The Persistence challenges you to survive aboard a doomed deep space colony starship in the year 2521. Stranded, malfunctioning and caught in the inexorable pull of a black hole, “The Persistence” is overrun with a crew mutated into horrific & murderous aberrations.

It’s down to you, a clone of security officer Zimri Eder, to make your way deeper in the decks of The Persistence to repair the systems and prevent the ship from being torn apart. Gather resources, upgrade abilities and fabricate an arsenal of weapons in this brutal sci-fi horror roguelike.

Face all the horrors that the living and the dead can offer in this new VR adventure in The Walking Dead universe. Travel through the ruins of walker infested New Orleans as you fight, sneak, scavenge, and survive each day unraveling a city wide mystery within the iconic quarters.

Encounter desperate factions and lone survivors who could be friend or foe. Whether you help others or take what you want by force, every choice you make has consequences. What kind of survivor will you be for the people of NOLA?

Until You Fall | PS VR

Fantasy and synthwave collide in this physically active PS VR sword fighting game. Grow stronger as you battle through an awesome neon environment and strike down magic-infused monstrosities in this hack-and-slash roguelite.

Move your arms and body to the synthwave soundtrack as you attack, block, cast spells, and dodge your way deeper into the heart of a neon fantasy world filled with magic-infused monsters.

Equip yourself with a variety of gameplay-altering weapons as you continue to gain strength and strike down the monstrosities that lurk throughout this mystifying world. 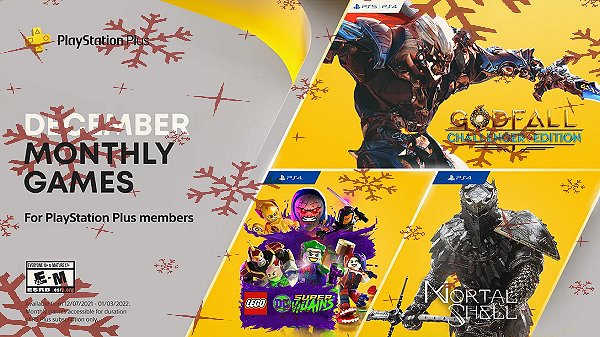 Member
Contributor
Verified
anyone else having trouble redeeming the PSVR games?

what i mean is, when i go to the website, i can add the other three games to my library, but not the VR games. i can’t try it with the shop on the PS4 because i am still on an older firmware.