PS Vita News       Thread starter PSXHAX       Start date Apr 18, 2017 at 3:30 AM       15,545       5
It's been about six months since Sony's previous PlayStation Vita System Software revision, and following Adrenaline 3 / AdrenalineEasyInstaller updates they've now released PS Vita Firmware 3.65 which InYourHands believes is "almost certainly stability" with ShadielTH stating "Can confirm that 3.65 kills ARK-2. It boots up to a red screen then closes seconds after." while LonelyCrawler adds "It looks like they've changed the app icon of PS4 Link and the background image inside the app. That's pretty much it, from the looks of it."

New for 3.65
Following the recent PS Vita Dev Updates, earlier this week developer pomfpomfpomf3 revealed on his Blog how Sony fixed HENkaku for those curious.
Additionally PS Vita developer Yifan Lu notes the following on Twitter today, to quote: "If you use PSN spoofing, make sure to change "3.63" to "3.65" in molecularShell settings."
From @SilicaAndPina, to quote: "3.65 Patches ARK-2. Set primary DNS to 212.47.229.76 And secondary DNS to 8.8.8.8"
This requires a testkit full dump made with physdump inside ur0:/dump/testkit.bin

Finally, below is a guide from zecoxao on How to setup 3.65 Local DNS for easy upgrade, to quote:

3. 3.65 update found in darthsternie.net (or any other one you want to really)

5. A brain to know which region the vita belongs to

1. Download and extract 3.65 OFW and psp2-updatelist.xml from darthsternie.net
2. Download al azif's dns host tool and extract it
3. Place both the pup and the updatelist.xml on your updates folder of dns host.
4. Once you figurre out which region your vita is from (us, eu, uk, etc) replace ALL instances of the given region in psp2-updatelist.xml with the one from your vita.
5. Start the dns host. If everything goes well you should see your PC's ip for main IP and DNS.
6. Set up the wifi of your console, taking into consideration that the dns must be the same one displayed on the host terminal window!
7. Attempt to update. You should see a notification of update version 3.65. if not, recheck region, and that the xml and updare files are ok!
8. Update

Showing that the DNS customization is limitless
Cheers to @xxmcvapourxx for passing along the news in the PSXHAX Shoutbox! 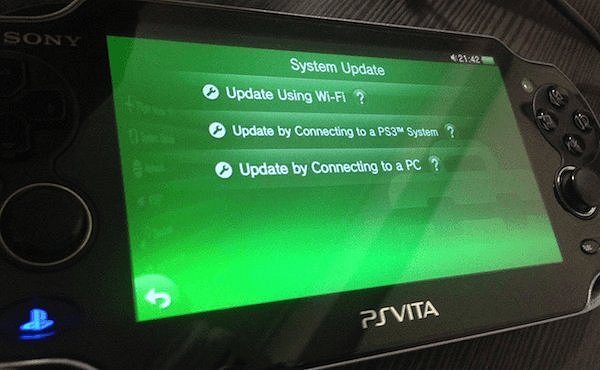 Senior Member
Contributor
Verified
I know that it is good for remote with PS3 and PS4 but whats the point of update it ? No 3rd supports it at all. 1st and 2nd party are slowly release few games on it. Useless minus homebrew and backups games..

Member
Contributor
I just find it interesting that Sony is still updating the system. With hardly anything being released on it...finding games in local stores isn't always easy, finding memory cards in stores isn't easy....If I see Vita games in stores, it's typically in pre-owned game stores that aren't national chains and it's only like 10 games or so. Yet, with the Wii U, Nintendo went over a year and STILL hasn't updated it, even with the Wii U being their current console on the market and it has backups

azoreseuropa said:
I know that it is good for remote with PS3 and PS4 but whats the point of update it ? No 3rd supports it at all. 1st and 2nd party are slowly release few games on it. Useless minus homebrew and backups games..
Click to expand...

That's true but it is useless since not many new games for PS Vita.. What's the point ? They should worry more about PS4 and PS4 Pro due to third party is strong and supporting and not this!

Contributor
Can Sony let the ps vita die it makes no sense to update a system that failed it had less than a million units sold. Even though I may own one it just makes no sense. LET IT DIE LET THE HACKERS TAKE OVER!!
You must log in or register to reply here.
Share:
Facebook Twitter Reddit Email Share Link