PS VitaShell 0.5 by The Flow is Updated and Open-sourced

VitaShell is an alternative replacement of the PS Vita's LiveArea. It offers you a file browser, homebrew launcher, built-in FTP, network host feature and much more!


In order to run / compile VitaShell you need
Credits
Changelog 0.5 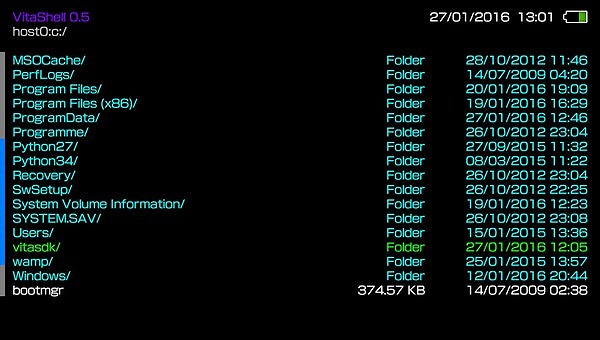 Assets
Install this new vpk by opening it as zip and copy eboot.bin to ux0:app/VITASHELL/eboot.bin if using VitaShell. If using molecularShell, you have to delete ux0:patch/VITASHELL first, then you can install the vpk. This must be done manually because the automatic update method has been changed.

Senior Member
Contributor
You know Im not sure what happened but when I installed vitashell 1.83 it installed fine, then I opened it it asked if I wanted to update. I said yes, then during the process of updating. I got a message saying this vita has been temporarily blocked because unauthorized software was found on this device. I have never had that happen before ever. Was it an April fools joke??

Senior Member
Contributor
NOBODY ELSE?? And dangitt @PSXHAX I was so freaked out It updated then went black and gave me that msg. Everything else worked but I was scared to try my other pstv or anything else for that matter. HOLY COW.

Member
Contributor
thanks for this. I still use the ps vita and its nice to hear there are still updates