PS5 News       Thread starter PSXHAX       Start date May 23, 2022 at 2:26 PM       3
Sony's Revamped PlayStation Plus Game Lineup is scheduled to arrive in Asia Markets excluding Japan on May 24th local time zone, however, some PS1 and PSP retro games are already surfacing on the PlayStation Store for Malaysia (Asian PS Store) for PS4 / PS5 with demonstration video footage below.

According to reports, the titles include optional trophies, up-rendering, rewind, quick save, video filters and can be purchased separately without a PS Plus Premium tier subscription required.

According to each game’s listings, the games are 'enhanced with up-rendering, rewind, quick save, and custom video filters'.

Consequently, there may be times where the title plays differently from the PlayStation version, or where some features may cause the title to not function properly. This version does not support the PlayStation console’s peripherals, therefore some functionality may not be available."

Here's the first footage of a PSOne game running on PlayStation 5.

Seemingly released early in some Asian territories, Oddworld: Abe's Oddysee is one of the first PSOne games receiving the emulation treatment as part of the upcoming PlayStation Plus Premium.

This also gives us our first look at the new emulation options, such as save states, various visual settings and the ability to rewind live gameplay.


Also below is a demo video from MysticRyan on Twitter (Ryan Biniecki's Patreon Page ) testing PS1 games on PS5 for those interested:

PS1 games are finally appearing on PSN (at least in Malaysia) and so far only Oddworld: Abe's Oddysee is released. So for the time being, let's download it and check it out before the full PS Plus re-launch! Turns out the PS1 feature support on PS5 is excellent with save states, rewinds, video presets, and aspect ratio options.

If what we're seeing right now is any indication, this might be one of the most exciting initiatives we've seen from Sony in awhile. Buckle your seatbelts everyone, let's get RETRO. (cue the sick 90's music and totally relevant 90's hairstyles).

Cheers to @RetroGamer74 for the heads-up on this via Twitter earlier!

Original PlayStation classics and PSP games are being ported over to the PS4 and PS5, and with them come some new features. Here's a look at what you can do. 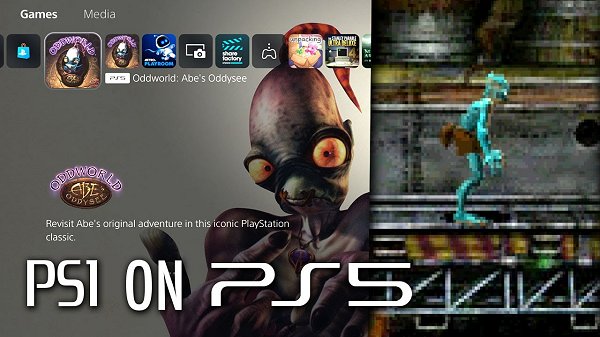 Member
Contributor
Verified
Any new psp games? Or is that out of date