Below are the changes, roughly translated from LizZo to quote: Custom Firmware FERROX 4.81 Standard Edition

Punctual as always !! A few hours later by the release of the Original Firmware 4.81 for PS3, we have good news!

Our friend and Developer Alexander has mesa immediately to 'work, to give us a new FERROX! The good FERROX we know him well, pretty much took the place of the old Rogero, and it went far beyond that.

Lately, even the FERROX is evolving. We have seen in the version 4.80 a restyling, with some really nice graphic Mod, made by our MiZiO90. In addition to this, we had the pleasure to introduce COBRA version of FERROX.

The news there this time either !! In fact, we thought we'd give you some new things. The FERROX 4.81 will give more satisfaction, in fact there will be a 'clean' version, that is, with the classic Install Package Files, and without Mod Graphics.

In addition to this, there will also be the version Mod, with graphics, etc. Package Manager. such as version 4.80. But we do not stop here! There will be fat surprises later! But this is no surprise that we will enjoy later

FEATURES:
INSTALLING THE CFW:
TEST ON CONSOLE:
CFW is stable, as always!

At the time of writing this post there are no Homebrew Compatible with CFW 4.81. We should wait for the release by higher Dev scene. So for the moment, you can use the FERROX 4.81 to Play Online with your Disk Games.

CAUTION!! By installing this custom firmware, for now you will not have the opportunity to play with your backup as mentioned. There are applications and Backup Manager Compatible with CFW 4.81, but it will come soon.

If you have games on disk and you want to play and go online, use PSNPatch !!! PSNPatch is an application to mask the CFW, and is compatible with all CFW 4.xx. SEN Enabler for now is not compatible with 4.81, your only choice when to NOT be Banned Online, is precisely PSNPatch.

So first of all initiated PSNPatch and press X at the main menu. After that enter the game and start it.

Currently, the developer Alexander is working on FERROX COBRA. So just for now we have the clean version of FERROX. For the version with Mod Graphics, we will have to wait a few hours. Do not worry, everything will come as soon as possible 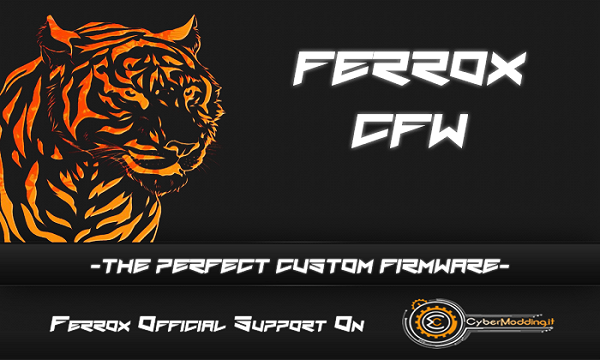 Which one better
Ferrox or Rebug, Darknet?

Member
Contributor
Download seems to be broken ("broken security token") even if registered. Can someone mirror on Mega?

DerfJagged said:
Download seems to be broken ("broken security token") even if registered. Can someone mirror on Mega?
Click to expand...

Edited it, I added a mirror for Mega, refresh now

Samet Chan said:
Edited it, I added a mirror for Mega, refresh now
Click to expand...

Contributor
how can i jailbreak my ps3 4.81 ofw super slim

Legitxshadowz said:
how can i jailbreak my ps3 4.81 ofw super slim
Click to expand...

You need be buy Cobra ode.
Where buy this called: http://www.team-cobra-ode.com
This domain has been suspended, maybe we can later next week or day will be back for site.

Which one better
Ferrox or Rebug, Darknet?
Click to expand...