PS4 CFW and Hacks       Thread starter PSXHAX       Start date Apr 10, 2022 at 8:05 AM       92
This weekend @jation shared a PS4 AIO Batch File Script he made for use on PS4 PKG Games and updates with FPKG Tools, including additional details covering all of the options outlined below.

For those just joining the PS4Scene, this comes following several related articles and PlayStation 4 utilities (sorted by date, with the oldest first):
Here's further details on the PS4 AIO Batch Script options by @jation from the Verified Member section:

PS4 display version 1.00 because Game + Update are merged. Check update history and you will see 2.13 version.

I made small bat file to fix that problem for any merged "1.00" game.. On start you will have choice to choose TEMP folder for FPKG Tools, FPKG Tools use %temp% folder which are on c: partition (Windows partition) and for some operation (remarry, merge....) you will need enough space on hdd.

Code:
When script starts you will be asked for temp folder for FPKG Tools. If you never changed that default temp folder:
6. Fix Game Info
If game is merged with update - Sony will display 1.00 version on main menu. So if you want to have proper version, you need only to put game PKG in GAME folder and you will get small PKG update around 5-10MB. After that PKG installed on PS4 you will have proper displayed version of game on PS4.

9. Data DLC to DLC without data
For some games: Soul Calibur VI, Cities: Skylines... if you have unlockers with extra data, game will have slow loading, menu lag... because still searching for DLCs. Picture will be preserved for any PKGViewer / PKGEditor, but on PS4 will be displayed with no name, no icon. Put DLCs in DLC Folder.

10. DLC without data to DLC with data
If you have DLC unlockers without data which need to be installed with USB method, because RPI over network cant install DLC without data. Generic picture will be added, picture from game or can choose picture you want. Put DLCs in DLC Folder.

11. Clear Temp Folder Choice
If you change mind about temp folder after typing no on first start.

12. Save Sharing between US/EU Games 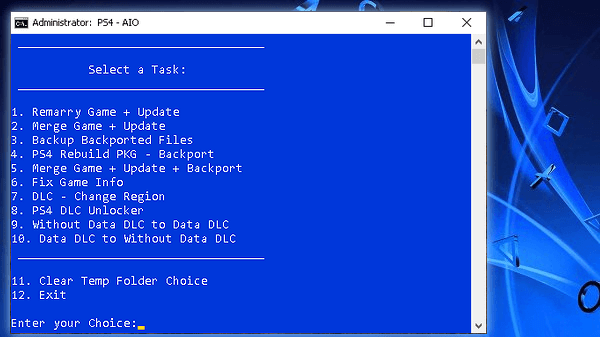 Member
Contributor
When i try to change the region of update they give in error occurred, some file named npbind.dat not found, whats the problem??

Member
Contributor
Is it possible to merge the DLC with the Base+Update pkg file?