Today 'anonymous' hacker AK471337 has leaked the PS4 BadIRET Kernel Exploit source code according to PlayStation 4 developer CTurt, with details below from my post on PS4 News and the related Tweets below!


From Wololo comes some additional details as follows, to quote:

PS4 Kernel exploit – is it good news for you?

If you’re an en user with no programming skills, this exploit won’t be useful for you. You’d have to compile it and run it on a PS4 on firmware 1.76, through the 1.76 webkit userland exploit. (The Kernel exploit might work up to firmwares 2.xx, but then you’d need to find an unpatched userland exploit in order to run it)

If you have some programming skills and happen to own a PS4 1.76 however, this could be a nice entry point for you to understand how these things are done. If you get to display the debug message from the kernel exploit (Entered Critical Payload), you’re pretty much ahead of 99.99% of the PS4 homebrew community today.

But if you’re an “end user” and can get a 1.76 PS4, this could mean someone might be able to release PS4 Linux for you sooner than later.

More generally however, as I’ve stated before, people with the right set of skills could probably have figured out the exploit thanks to CTurt's detailed explanation. This release probably doesn’t change much who’s going to work on exploiting the PSP in the foreseeable future.

How the leak happened

Rumors say someone was able to grab passwords from several well known hackers of the PS4 scene, and managed to work his way into a private github where the files were stored. There is a strong reminder here for all of us that you should have different passwords on all the sites you visit, to avoid becoming the weakest link in such a situation.

There’s a group of people who believe leaking such information is a good thing for the scene as it spreads the information. In my opinion, hackers often have very good reasons to not share their hacks, often because they are not ready for public consumption, and as such are useless to the vast majority of users. A hack that leaks at the wrong time could typically be patched by the manufacturer before it is even made usable for the scene.

The BadIRET exploit however has already been patched by Sony a long time ago, so it leaking is probably not a massive problem for the scene... What do you think? This is exciting news, but also a bit sad given the circumstances of the release.

From choppa: I found this ?

While this may indeed be a legitimate leak, it could also be a planned insider leak with rumors of an upcoming PS4 Cobra USB Game Emulator DRM Device... time will tell for sure. 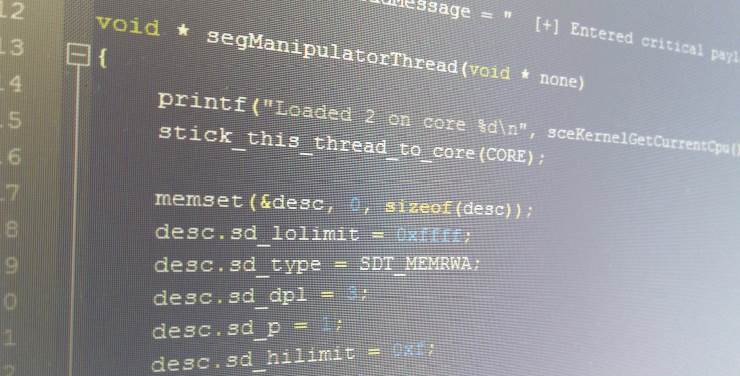 Developer
Senior Member
Contributor
oh no, I feel that Sony will cover all will be in vain. Why put the source .. These codes have long been there, which was not clear to merge. my work is not hurt, because they were a year ago, even back then I knew it. My results will be more and give opportunities interpreter.

Staff Member
Moderator
Verified
I have a feeling all of this is an insider scheme, with Cobra releasing a for-profit PS4 dongle soon anyway.

Then when they charge PS4 sceners for it they can say "you can use our DRM product or make your own with the leaked code" in a lame attempt to save face with the hacking community.

Time will tell for sure

PSXHAX said:
I have a feeling all of this is an insider scheme, with Cobra releasing a for-profit PS4 dongle soon anyway.

Then when they charge PS4 sceners for it they can say "you can use our DRM product or make your own with the leaked code" in a lame attempt to save face with the hacking community.

Now it is possible to make cfw and even usb dongle, but not for long, these codes are not all the time - that's why I am working lv1

Published two months ago by CTurt on his official github page...

So there's no "PS4 Dongle.txt"

P.S: Also, dunno if this has been published (even though I Think it was), but here's a link: https://mega.nz/#!NsVz1YLa!8s6kCFfAnsXxxdRjtLmKBU9DQmosJtd-u9BdQ9u3g2U

DotExE01 said:
P.S: Also, dunno if this has been published (even though I Think it was), but here's a link: https://mega.nz/#!NsVz1YLa!8s6kCFfAnsXxxdRjtLmKBU9DQmosJtd-u9BdQ9u3g2U
Click to expand...

DotExE01 said:
P.S: Also, dunno if this has been published (even though I Think it was), but here's a link: https://mega.nz/#!NsVz1YLa!8s6kCFfAnsXxxdRjtLmKBU9DQmosJtd-u9BdQ9u3g2U
Click to expand...

Much appreciated @DotExE01 for sharing the link, I'll add that to the OP as well

Senior Member
Contributor
And the battle is ON like collard greens & neck bones! LOL!

Developer
Senior Member
Contributor
I'll be on github I lay out all your design, coding hacking ssl, lv1. will only make the convenience of a USB flash drive but I have almost everything ready for the full hacking consoles to version 3.15 to 3.50 through I do not know need to watch the source code. (SOON)