Following his previous release, PlayStation 4 developer @LightningMods shared a screenshot on Twitter of what he calls PS4 CEX2Semi-DEX geared towards those with a retail jailbreakable PS4 5.05 Firmware console.

If you're new to the PlayStation scene or unaware, CEX typically refers to a retail console whereas DEX designates a Developer (Debug / Test) unit or the features thereof such as Debug Settings.

According to the Tweets below while DEX loads on boot a HEN is still required, but as mentioned most newer PS4 games contain a higher software development kit version so they won't work on a 5.05 console meaning the wait continues for a Future PS4 Jailbreak Exploit... and to quote from LightningMods:

"I think as far as practicality it's pretty practical considering you just need to install once and it's there forever, usefulness I just like the UI and debug shortcut, it's mostly only for testkit lovers, like a theme."

DO NOT use leeful74's Ps-phwoar exploit host with any of my apps until he fixes it or you get a kernel panic.

Or just convert to retail and never expire (should still be able to use fake packages).

Hello everyone, welcome back to my channel! For today's video I will be showing you guys a new homebrew for the PS4. The new program we will be talking about is "CEX2SEMI-Dex" which is a testkit/devkit updater for 5.05 HEN consoles. If you guys did enjoyed this video please be sure to leave a like and subscribe to my channel for more daily tutorials just like this!

• This is a POC “Proof Of Concept” so this is not an official release. If you installed this onto your PS4 and accept the agreement and something does happen while updating, me neither are devs are responsible for any damage that this homebrew may cause on your HDD/Console.

• Note I’ve tested this 6x already to make sure that this is a safe homebrew.

• This won’t allow you to get online or play games higher then 5.05 FW.

• Take this is as a “theme” and a UI change. *Debug settings at the home screen*

• You can flash to Devkit/Testkit and as well revert back. 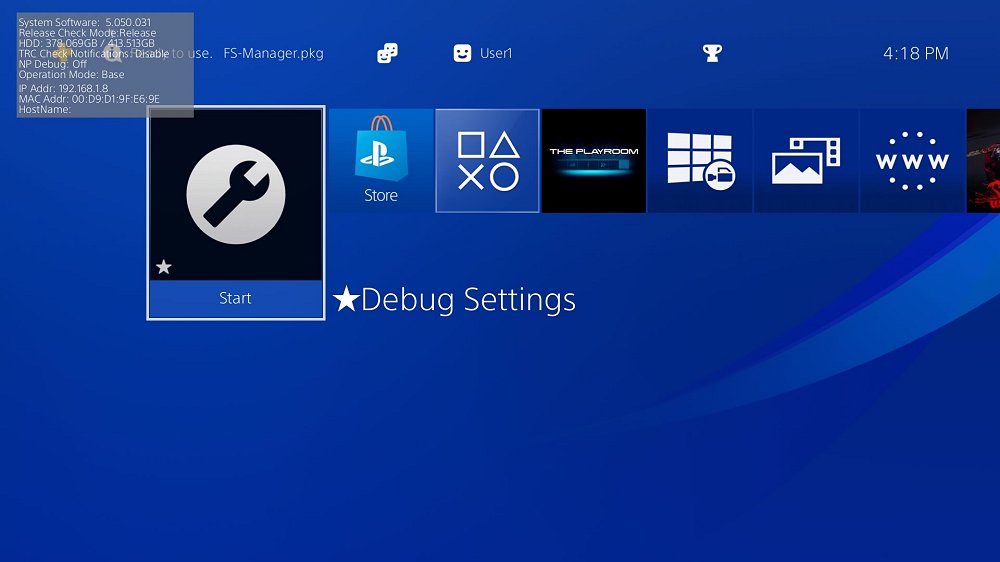 Member
Contributor
Verified
@stupotious I would guess its Sony code and HEN is needed for it to recognize it and start the code. I'm probably way off.

Member
Contributor
I just get kernel panic ;-; great progress though!

Member
Contributor
Thanks for cex2 semi dex but please update it, i hope can update with devkit pups, downgrade and upgrade, full debug settings and connect ps4 neighborhood.

Member
Contributor
Got it working with 1.9 hen with r/w enabled as suggested to me by 84Ciss, works quite well

Member
Contributor
Verified
Hi, please I have one quick question... If I want to jailbreak my console but still want to remain ability to play online with ps plus, is it wise have on one HDD jailbreak and other jailbreak-free ? Or there is still chance of ban ?

Member
Contributor
Verified
@0T0 Sorry, but it is not possible. To access PSN, you will need to update to 9.03 then there will be no way to jailbreak anymore.

In theory, a downgrade to 9.00 is possible, but it involves low-level coding skills and soldering, so there is a high chance of bricking your console after all. TLDR: You have to choose between homebrew and playing online.

Member
Contributor
Verified
@juvenvergara thanks for reply and sorry for using wrong forum thread, but you probably won't get my point (or i am not get yours )

Will it work and will I get ban or not

Member
Contributor
Verified
@0T0 Yeah... Maybe I didn't make myself clear. Firmware is not like a computer OS that you can swap hard drives and go back and forth between versions. When installing the newest Firmware, some chips on the PS4 motherboard are also updated.