To kick things off on this Valentine's Day hot on the heels of recent PS4 scene group MarvTM comes news via Malatya of another known as Playable, who is also doing PS4 4.05 PKG releases including The_Last_of_US_Remastered_EUR_FW_405_PS4-Playable... and even DUPLEX is now doing 4.05-friendly PS4 releases including Uncharted.4.A.Thiefs.End.PS4-DUPLEX.

Next up, @CelesteBlue passed along a Pastebin guide via Twitter from Barthen on how to lower the firmware requirement in ELF and PRX files which can be found below.

Following that method and the Free PS2 Pub Gen / Fake PKG Tools releases, PlayStation 4 developer @cfwprophet shared some updates on Twitter including Fake_PKG_Tools_v1.3.rar and an ELF FW Patcher v1.0 which patches the Firmware Version hex number of one or more PS4 ELF files for those working on getting newer titles running on 4.05 OFW.

From Barthen: How to lower the firmware requirement in ELF and PRX files

Example of lowering the firmware required for files compiled with the leaked 4.50 *** (tested on 4.05) hex editing some bytes:

5. A side effect of this is that if someone is able to dump games on higher firmwares (ex. 5.05) it SHOULD be possible to play those games in lower firmwares (ex 4.05) with this method, unless the games uses functionality added on newer ***s

From the ReadMe.txt: ELF FW Patcher v1.
Status Strip is currently broken......need to invoke it. I'll ix that later.

Here's a video via @toni1988 from Cyb3r on YouTube, with a rough translation as follows:

We already have the clear sign that there is something forceful in PS4 firmware 5.05 where it looks like can massively launch games from a USB external storage disk. Still better than in 4.05. Everyone's question is when will the release be? We will not be able to prove it but if it comes out we will have to update.

Finally, @Bassabov shared a Horizon Zero Dawn Russian Video Demo (a translation would be great) alongside another via @GritNGrind from kbarticle for those interested.
Thanks to @bonusball, @kizabg, @Orgad, @sdlc, @spyro2670 and @ziobleed for the news tips in the PSXHAX Shoutbox today, and enjoy your Valentine's Day everyone! 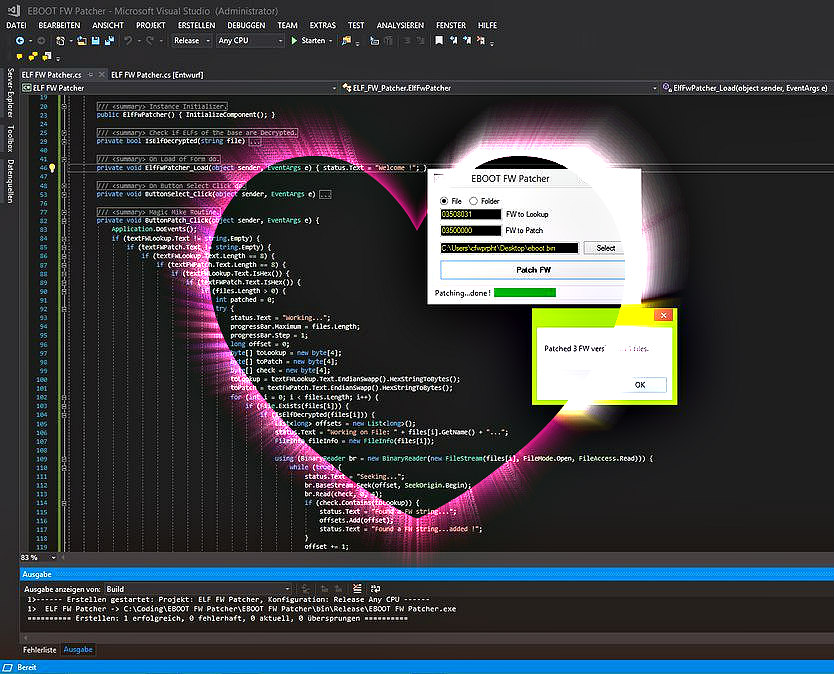 Developer
Senior Member
Contributor
Verified
I was going to post it Fantastic and super details news !!!

Senior Member
Contributor
It is about time ... Within less a month ,,, that's amazing

Member
Contributor
Verified
But how do you dump the the game when you need a higher firmware? I have nier automata just sitting here asking to be dumped.

Member
Contributor
You cant except if you have an exploit for a higher firmware or your kernel is patched to spoof a higher kernel version of 4.05 (both arent publicly released yet)

Senior Member
Contributor
Verified
Apparently, someone with a private 4.50 exploit dumped Horizon Zero Dawn and got it working on 4.05 using this method. Too bad the dump didn't get leaked to the rest of us.

Senior Member
Contributor
Verified
Games that require higher firmwares can be dumped with a 1.76 devkit if im not mistaking.

This is great progress again. Big respect to cfwprophet and the other devs!

Looking forward to play Horizon, Valkyria Revolution and other games with firmware>4.05