T42-repackager is a script that make quick and easy the repackaging of PS4 FPKG updates (fully automated process).

This script has been written completely from scratch by myself (inspired by duxa's unpacker).

Why should I use it ?

To resign FPKG update build with a different base because of signing problem (error ce-36434-0).

To modify and rebuild FPKG update for testing or modding purpose (don't release them as proper update).

What this script does not :
Before asking for anything :
Known issues :
Requirements :

1. a device with windows 7 or higher and a drive with enough space
2. proper fpkg base and proper fpkg update with same cusa-xxxxx
3. my script and few binaries dependencies from Fake PKG Tools v1.3
4. a brain and a little bit of your time

1. download my script attached below and unzip in your working drive
2. launch a first time to create tree directories
3. download binaries from fpkg tools v1.3 and unzip under bin directory (see screenshots)
4. put a base fpkg in the game directory and the related update fpkg in the patch directory
5. then launch t42-repackager.cmd and wait few minutes … that’s all !!!

The root of the script should look like this after step 3 (see above):
Few things to know :

This script is entirely portable and it’s the same for all working directories.
System drive can be preserve from overload if you choose another working drive.
There are many checks so if there’s something wrong, the script should tell you.
Full repackaging process may take a while depending on the update size and your hardware.

Performance may be improved by working on different disks (see section below).
This script has been tested in every sense to be improved and consolidated.

I do not encourage in any case backups in any form whatsoever. My work is for testing and learning purpose. Please buy the game you play to support independent and mainstream studios. This is for legal reasons that I do not include fpkg tools binaries in my archive.

I am not responsible for bricked devices, loss of data, kernel panics or blue screens, motherboard or hard drive overheating Use this script at your own risk !!!

Depending on your hardware and update size, performance may be improved by working on different disks to separate read/write access and avoid overload.
In a first time, you could try to separate temporary and/or unpack directories from the rest. To do that, just edit my script and modify %temp% and %unpack% variables. 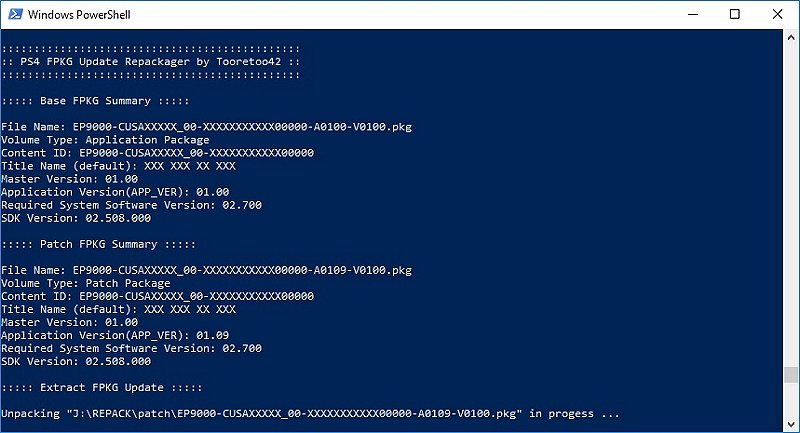 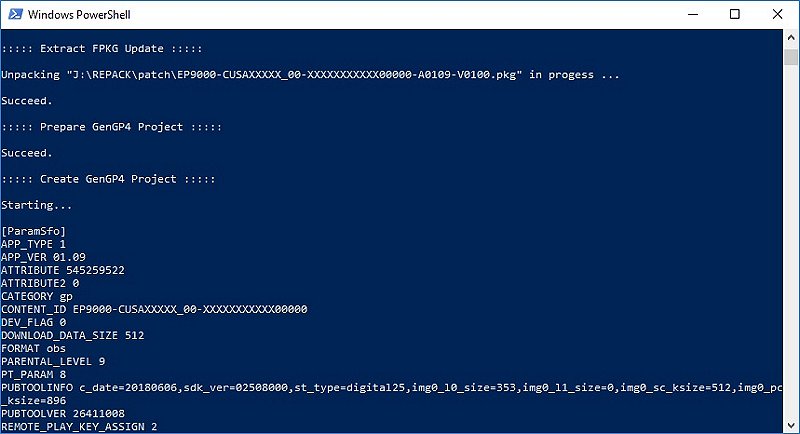 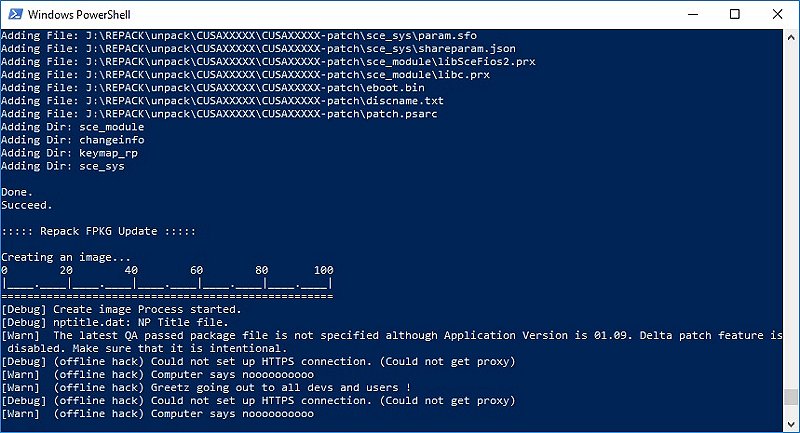 Others screenshots are about a less verbose mode and the no need to re-extract capability.

Senior Member
Contributor
Verified
Nice work @tooretoo42 this should be a big help for those having issues repacking.

Staff Member
Moderator
Verified
I'll update everything once we're on a better server, hopefully sometime this weekend if all goes well.

Member
Contributor
Verified
thanks tooretoo42
it's a lot easier now

@PSXHAX : happy to see the forum back and more stable. thanks for all your hard work !

Member
Contributor
@tooretoo42 I have error libatrac9.dll missing.
Where I find this dll.

Thank's for your work.

Staff Member
Moderator
Verified
Since this server's speed is faster than a snail's pace (unlike the last one) I'm working on updating the news tonight and added this to the main page now thanks @tooretoo42!

Senior Member
Contributor
Maybe we can create a tool exe with all the fpkg links like noplaystation on ps3 with real pkgs.