Today Ginsor has released a new Editor for the GameDump Payload to change the Title Id. This might be very interesting for those, who can't compile their own payloads, as you can use that tool to adjust.

He made this handy Tool exclusive for PS4 eXtreme Modding Note that the payload itself is still the one of CTurt and all credits for that go to him!

Short Instruction of the Editor:

1. Select the GameDump Payload.
2. Let the tool find the current Title ID, which is set in the Payload.
3. Type in the new Title ID and apply it to the payload.

Tutorial of how to dump a Game:
Cheers to @HydrogenNGU for the heads up of this PlayStation 4 scene news on Twitter! 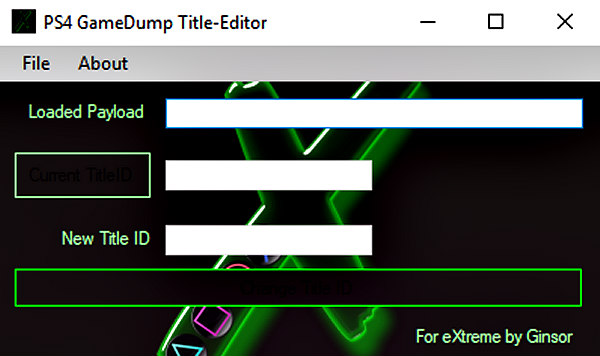 Developer
Senior Member
Contributor
Verified
Nice I was thinking of putting something like this in PS4-AIO but nice to see someones already made a tool. Although not sure why it uses OMSK and dumping to the consoles hard drive. Would it not be easier to just use the normal payload that dumps the files to the USB and just have the tool replace the game id in the payload to whatever game id the user types in? Or am I missing something?

Developer
Member
Contributor
i think the text was a bit misleading: extreme used OMSK as an example.

Senior Member
Contributor
Verified
this just hex edits the payload like i said yesterday, Nice tool but a linux one would have been nice and a credit for the idea too

Senior Member
Contributor
Great, next task is make this for 1.76+

Staff Member
Moderator
Verified
The link is dead and I didn't have a chance to grab it yet... can you repost or PM me it thanks.