Since the previous update from his YouTube Channel, game modder @manfightdragon (Lance McDonald's Patreon) shared on Twitter some footage of a PS4 Kiosk DVD iSO to Download ALL Game Demos alongside a PS4 OMSK Inventory.json Mod from @jose gozalez's YouTube Channel (Twitter) with more videos below!

Finally, proceeding his Installing a PS4 FPKG on PS5 Test from @jose gozalez's YouTube Channel are some related PS4 Scene videos below for those interested... sorted by date with the oldest first:

A simple study and entertainment of the functioning of the system.

Full activation of the IDU Mode in 5.55, which ends the study of the OMSK and the system processes:
Download Official Games Through OMSK Without a Lock, Changing the Configuration

PS4 in 5.05
I have modified the settings.
A user and password are presided to let you access.
This is mere fun, it is not a hack, nor do I pretend it is, I just show curiosities of the PS4.
By Modifying the Inventory JSON

By modifying the inventory.json the covers of the games you want to add as their photos and a description already appear, the OMSK becomes an attractive shortcut.
for those of you who are still stuck in ps4's idu mode, or have a controller you cannot use, but you know how to solder, dump and flash, there are some good news. i found out the flag where idu mode is toggled
at 0x1CA600 on sflash0 the byte 00 means disabled and the byte 01 means enabled. you can now toggle idu on and off forever
alternative, you can also do this via payload, with the command icc_nvs_write(0,4,0x1600,1,&flag); where unsigned char flag is either 00 or 01
the omsk pkg method only works with fpkgs if hen is enabled. you can take a look at the necessary files in the respective idu discs (for example in the summer 2019 gamestop disc). copying the contents from the iso to the pendrive will do the same thing as burning a bluray drive
Install PKG on Any Version of System Software / PKG PS4 Without Debug Setup
Install PKG on Any Version of System Software Part 2
What is PS4 IDU Mode/OMSK? (Overview/Guide)
Installing PKG (OFC) in 7.02 and 8.01 (Online). IT IS NOT A HACK, DO NOT TAKE IT AS SUCH.

Works on all PS4 Firmwares. (THIS IS NOT A HACK, TAKE IT AS A CURIOSITY)

Auto installing a PKG (OFC) in 7.02 and an update, installed correctly, (there are updates that it does not recognize if the name is not changed) In 8.01 auto install PKGs (OFC)

1- No PS4 is in IDU mode.
2- Without HEN you can only install the official pkg, and have its .rif, this is not a hack.
3- There is PKG, yes if you do not put the official name they will not be installed.

1- Make a security copy of your PS4 before installing. (I am not responsible for losing your data.)

2- Directly unzip the IN HDD, at the root of the USB, remember that there are 2 hidden files that have to be passed.

4- For consoles above 7.02-plug the USB into your PS4 and restore the backup, configure your PS4 to your liking, DO NOT DELETE ANY OF THE TWO APPS, The second one blocks the OMSK download.

5- To auto-install the packages, first start the PKG auto install, the application stays in the background, second, connect the USB.

I have left three free games for your test, Regards.

The versions of PS4 that use the OMSK mode use IDU discs for game demos, thanks to the OMSK daemon it can be semi-activated so that it recognizes the IDU discs and their content, thus installing the packages, the files are removed and modified from the IDU discs, understanding its operation is ideal for the task. Enjoyment.

Update: Here is a payload to exit PS4 IDU Mode if anyone needs it:
Exits IDU Mode
Should "turn off" when it's done, just hold the power button after the screen turns off. When you turn it back on you should be out of IDU mode
PS4 IDU Mode

It's a mode where the ps4 keeps constantly updating to the latest firmware, used in kiosk retail consoles. There are usb configurations and also demo discs (isos) for the demos which can be used together with OMSK (cover and demo downloader)

How to enable it? (don't do this please) (please keep the network disconnected)

Either via debug settings on HEN (if you are on a hacked version, 9.00 or below) or via sflash patching:

Code:
How to disable it? (do this if you have enabled it accidentally)

Either via debug settings on HEN (if you are on a hacked version) with staff mode combo: L1 button + L2 button + R1 button + R2 button + D-Pad up button + option button (hold for a few seconds) and then disabling it. 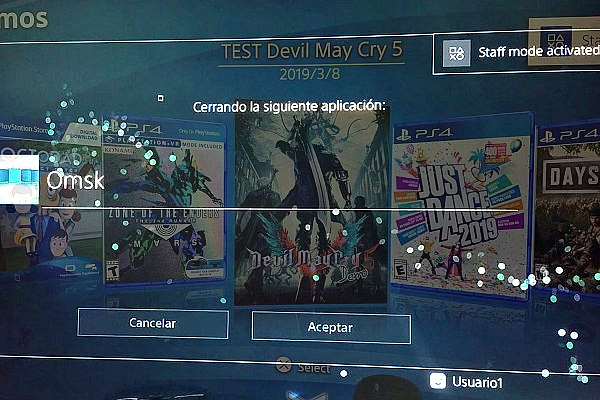 Developer
Senior Member
Contributor
Verified
IDU mode = kiosk mode, if you ever went to a store that had a PS4, that PS4 was in kiosk mode, omsk is the app you pick game demo's etc. all lance really did was dump an IDU disc, stick it into an ISO, he didn't create anything new, just old news, new day.

VIP Member
Senior Member
Contributor
Verified
Every small detail no matter how insufficient it might seem is another crack on the ps4 wall, well done i never knew this

Senior Member
Contributor
Verified
Demos.. wow I miss the old days where you bought a magazine just for the included demo. Spent hours and hours on Tony Hawk's hangar level.

Senior Member
Contributor
Verified
This is pretty damn cool! Hopefully all these demos will be available for all hen users at some point without needing IDU mode.

VIP Member
Senior Member
Contributor
Verified
Is this a 5.55 firmware version only?

Member
Contributor
Verified
Can this be turned into a game manager?