Recently PlayStation 4 developer Duxa (aka @Chrushev) made available a PS4 PKG Repackager which allows you to repackage fake patch update PKGs to work with your games on a jailbroken PS4 console.

Here's what Chrushev had to say on the release, to quote: Hi all,

Few things off the bat:

1. I wrote this for myself in order to automate the tedious part of repackaging (see below as to what it does).

2. I tested it on Win 10 and Win 7, both worked for me but this was not tested beyond my machines, so please report any problems

3. Please do not tell me it has a exploit, some obscure exploit scanners mark it with a false positive (probably because its not a signed exe). It does not have a exploit, I do not want to mine crypto with your machines, nor am I interested in your personal info. There is no exploit... all mainstream AVs mark it as clean. If you dont trust it, dont use it (good rule to follow in general). exploit report is available here and you are of course welcome to run your own.

4. Do not ask what the passcode is for your package. Try the default (simply press enter), if it doesnt work then you may be SOL. No one knows what it is other than the original pkg creator. Everyone should use the all zero default.

Now to the good stuff...

What is this thing?

Its nothing more than an automation tool. It unpacks a fake update .pkg for you and prepares it to be repackaged.

Why would you want to do that?

Because there is a requirement that update pkg is created with the same image that you have installed. Matching CUSA is not enough. So for example, if you and your friend both live in London. You both have UK version of Horizon Zero Dawn, same exact CUSA. You go home and create a .pkg of the game, and your friend creates .pkg of the update on his console. That update will not work with your .pkg. It is imperative that the update pkg is created off of the exact game pkg that it will be installed on.

PS4 scene is young, a lot of dumps are done without updates, and you cant simply create an update later (not easily). To "fix" this, we can repackage the update with the game .pkg that you have (even if it was not created from that pkg) and the update will work. NOTE: CUSA of game pkg and update pkg still HAS TO match!

Will this allow me to run updates that require higher FW that mine (4.55 at this time)?

Can I use this with official update files?

You will need:
What is the process?
How To Repackage a FPKG Update
How to Install Older PS4 Game Updates on Any PS4 7.02/7.50 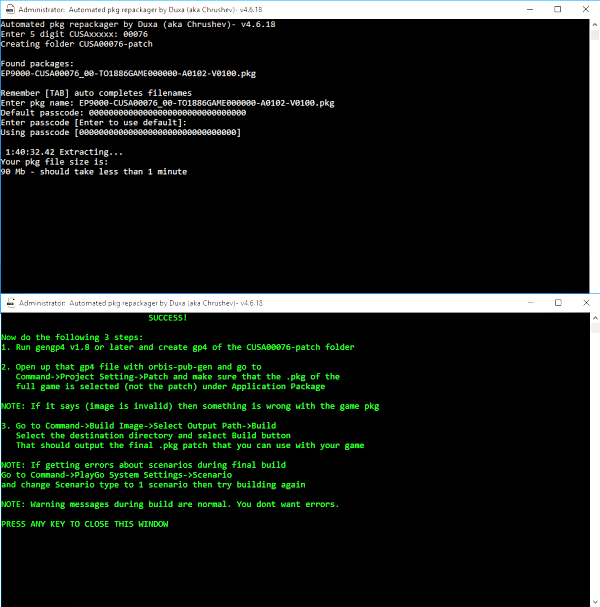 Member
Contributor
Thanks man for you hard work

Member
Contributor
Thx for your work

Senior Member
Contributor
Verified
Good job but I will pass. In the near future, official update files will be possibly. Only time will tell.