To quote from his announcement on Logic-Sunrise.com, roughly translated: [PS4] Playground 4.05

Here is a small Playground for PS4 in 4.05, the base created by SpecterDev and Red-eyeX32 for PS4 in 3.55 for the POC 3.55 (Webkit), which I allowed myself to modify in order to integrate the 2 available kernel exploits.

Indeed, with the publication of FULL FTP, there are now 2 kernel exploits.

The 1st of SpecterDev including some restrictions preventing FULL FTP and that of IDC without restrictions.

So I gathered the 2 exploits on one page (Playground), as can be seen on Wii U with the various exploits, but also put a link directly to google.com.

You will also find shortcuts to various news sites like Logic-Sunrise.com, Modconsoles.fr or PSXHax.com, to know where to follow the news of the PS4 scene (it is possible to add very easily ^ ^).

You can use this "Playground" only if you have a local server, just unzip the archive in your C:\xampp\htdocs\document\ca\ps4 folder.

Anyone wishing to make changes to this Playground is free to do so, I do not think to keep it up to date, modified at the base for my local server, I share it to you after adding the exploit Kernel of IDC.

Playground PS4 4.05
I would like to thank @SpecterDev for his many works, as well as @RedEyeX32 and IDC for allowing this mini-Playground 4.05.

Here comes a simple Playground (webpage) for the 4.05 which contain the Binloader, the HEN (Homebrew Enabler with Debug Settings) and a FTP Server to dump and decrypt Games.

Note: I have tested it with a Proxy and it work fine with the Direct-Link redirection.

Credits: Thx to qwertyoruiopz for the WebKit Exploit. Thx to Specter for the 4.05 Kernel Exploit and Binloader. Thx to idc for editing the Exploit. Thx to Wildcard for the HEN implementation. Thx to Vortex for HEN webpage the new FTPS4. 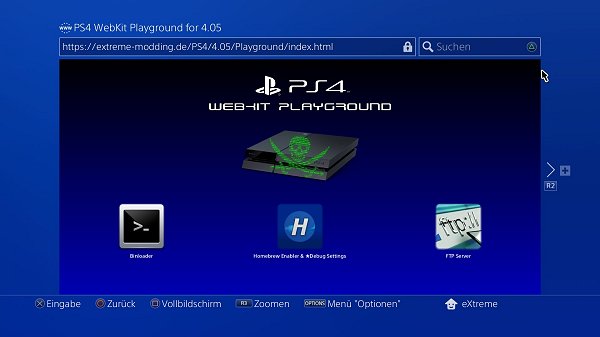 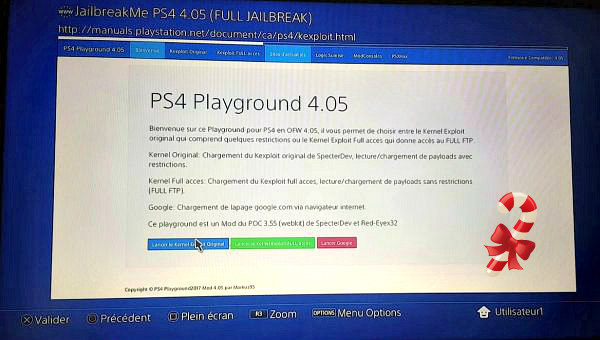 Senior Member
Contributor
Is there a version with normal language?

lobimagobi said:
Is there a version with normal language?
Click to expand...