And from the README.md: ps4_release_calendar

A web-scraping project which updates your Google Calendar with release dates of upcoming PS4 games.

The main goal is to help PS4 gamers like myself who have no time or too lazy to go to websites like IGN to check upcoming PS4 games. 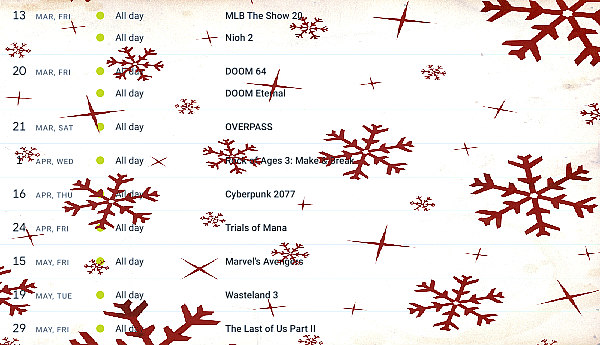 To access your Google calendar using Python you need to set up Google Calendar API. This YouTube tutorial by Indian Pythonista explains the process very well. (watch it until the initial setup.)

If you have wathched tutotorial, you should have credentials you need saved as client_secrets.json. Place the file in the main project directory and in the pickle/ folder.

All the packages/modules required can be found in requirements.txt To install, simply use pip:

There are two ways to run the script: with or without pickle.

*every time you run any of the scripts, you will be prompted to login to your Google Account to authorize the app

First, run the check_calendar.py, which prints out the name and id of each Google calendar you have (I recommend you create a new calendar just for the release dates so you can toggle it on/off), and take note of the id of calendar you want to use for the script.

Alternatively, you can just log in to your Google calendar and click "configure" on the calendar you want to use, and then scroll down to find the id.

*with pickle that stores you credentials, you will only be prompted once to log in to your Google account

First run the save_creds.py which will prompt you to log in and authorize the app, and then stores credentials as token.pkl.

Then run the check_calendar_pickle.py, which prints out the name and id of each Google calendar you have, and take note of the id of calendar you want to use for the script.

Member
Contributor
Very nice
You must log in or register to reply here.
Share:
Facebook Twitter Reddit Email Link
Recent Articles
Minecraft Dungeons Battles Onto New PS4 Game Releases Next Week
Inspired by classic dungeon crawlers, get ready to begin a new quest in the action adventure game Minecraft Dungeons, set in the unmistakable blocky Minecraft universe next week on PlayStation 4...
SpecterDev Shares Low-Level Details on Porting MUSL to PS4
Since the OpenOrbis PlayStation 4 Toolchain release and related guides on his YouTube Channel, PS4 scene developer @SpecterDev of SpecterDev.ca (Patreon) shared via Twitter a Blog Post detailing...
Sony's Days of Play 2020 Sale Offers Deals on Games and More
With Memorial Day weekend and the unofficial start of summer upon us things are heating up outside as well as in Sony's Days of Play 2020 sale with deals on PlayStation games, accessories, PS Now...
Super Console Wars 1.0 PS4 Homebrew Game PKG by Lapy & Acekone1!
A few weeks back we saw PS4-Xplorer File Manager Theme and Avatar Maker followed by a PS4-Xplorer 1.19 update, and today PlayStation 4 homebrew developer @Lapy returns via Twitter with designer...