Our friend developer and sunriser Darkstorm invites us to discover his latest Linux distribution called SalientOS.

Based on Arch Linux, this OS integrates SteamDeck and it can be launched with a new way of installing Linux which is simplified.

Here are the features of SalientOS:
Emulators:

And from DarkStorm on the installation, roughly translated to quote: PS4 LINUX new distro with integrated steamdeck & new simplified method of installation

1. Installation on USB key - you will need at least a 32gb size usb stick !

a] download the compressed .img here : salientos_plus_emus_darkstorm_US.img.rar (6.2 GB - Login: darkstorm / Password: logic)
b] unrar the rar file with winrar
c] download balena : balena.io/etcher/
d] insert your 32gb usb stick and flash it with the .img on the USB key:
- click on 'select image' and choose the file salientos_plus_emus_darkstorm_FR.img
- click on 'select drive' and choose your usb stick
- click on 'Flash' and flash your stick the selected file previously
e] If you are in belize southbridge, you have nothing to do anymore, you have to insert your stick in the PS4 (don't forget to jailbreak your console before..) and then launch the linux payload
f] If you are not in belize southbridge :
- plug the stick on your PC. If windows tells you to format a partition, DO NOT DO IT : this is the partition where linux is already installed
- windows should have mount a 50mb partition with the following directories in the root : _AEOLIA, _BAIKAL, _BELIZE. Go in the directory corresponding to your southbridge and pick up a bzImage. I advise you to use the 5.15.15 version but you also can use the other version.
- Copy the bzImage of your choice to the root of the stick and rename it as bzImage (warning: there is a i in uppercase in the name and you will have to delete the original bzimage file to be able to rename your choosen bzImage)
- Eject the stick
- Now you can boot the linux like explained in e]
g] If you have flashed the .img on an usb stick larger than 32gb, when the linux is up, you can extend the partition with gparted to the maximum size of your usb stick.

2. Installation on the internal PS4 hdd 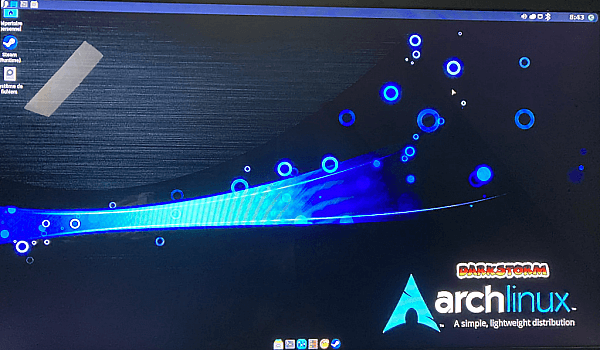 Member
Contributor
Verified
@d4rkst0rm
Does Citra work on your distro?

Member
Contributor
I'm too old to try this, because of the files bzImage and the other one. I was trying many files, but the install never begins. Maybe you can fix this, and i will need only the salientos_plus_emus_darkstorm_US.img.rar file, to copy on usb, and then install it to the ps4.

Sorry for my bad english

Member
Contributor
Thank you for your hard work.

Member
Contributor
@d4rkst0rm
Thanks for your hard work, it runs very very well, but I don’t know the password, can you tell me!

If it's the same let me know and we'll add it to the OP.

Member
Contributor
@d4rkst0rm
yeah, it’s the same, logic, it performs very well, I tried Firefox, performing better than psxita, and it has many emulators pre-installed which is super useful! Thank you!

I want to turn it into a great multi-media htpc and retro gaming box! But it seems that it didn’t recognize the bd driver, meaning that I can’t play dvd or bd-rays on this distro, tried every kernel, I think 5.3.18 can recognize bd driver, but it stuck at the boot screen, any solutions?