Reminiscent of the KALiSTO and PARADOX old skool scene days when talent beyond simply dumping / ripping video games was required, over the weekend PlayStation 4 scene release group DUPLEX raised the bar a notch by doing just that... and removing the mandatory online and title update requirements on their latest PS4 scene release!

For further details on the release notes see the SPOILER below, and in summary they included the 1.01 Update and six DLC PKG's to play ALL the game modes including single player and multiplayer (even in LAN and / or against bots) bypassing the online requirements for those using PS4HEN with the 6.72 Exploit Menu / Al Azif's DNS on a Jailbroken 6.72 PS4 console!

Since proving it can now be done, here's to hoping as the PS4 scene progresses this becomes standard on other PlayStation 4 game releases with an end-user guide on what to modify and / or how to get it working using an original disc (saves downloading 121.78 GB in this case) to bypass the PSN online check requirements.

Update: For those following, DUPLEX has also made available a 'proper' release of another (PLAYABLE) PS4 title today that previously required an Internet connection to download the remaining content... with more details in the SPOILER below:

As with other related developments, beyond this article outlining the news in general we do NOT allow discussing the releases, files, names, hashes, hints, etc on the public forums to avoid legal issues. 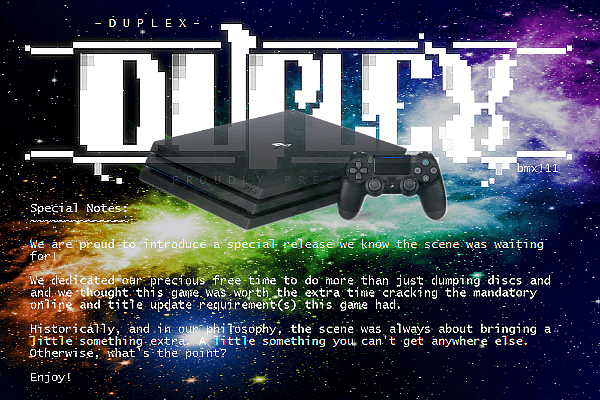 Member
Contributor
Verified
What does this mean please, can I update my PS4 games now, with this, as they won't update, or is this something different Thank you

Member
Contributor
@Techjay that means there is no need to go to sony website and make an account and activate it in order to play the game.

Member
Contributor
Does this mean we can play Crew 2?

Senior Member
Contributor
@Techjay, it's in the spoiler.

Member
Contributor
I hope they able to dump dlc for ffxv