Before diving into the release, a brief Remaster PKG lesson for those interested:

Since covering How to Remarry PS4 PKGs previously, @Archi55 (who tested PS4 Tools: Context Menu) notes that new users are merging game BASE + UPDATE into a single v1.00 file because they don't know how to create a higher version... resulting in a second 'fake' patch required simply to increase the app version displayed leaving them with (2) files unnecessarily.

A Remaster PKG acts as both the game BASE v1.00 and UPDATE (for example, v2.03) in single file to save time and save space... as you don't need a BASE v1.00 with UPDATE v2.03 inside and then another 'fake' patch to correctly display the app version as v2.03 in order to trick the PS4 System into showing the proper (higher) version.

It's important to note when building Remaster PKGs a BASE v1.00 game file (doesn't matter which, it can be a fake base out of sce_sys) is necessary to link to during the creation process.

This means, for example, a Remaster PKG with UPDATE v2.03 can be installed without first installing the BASE v1.00 (saving time and saving space) since the Remaster PKG overwrites BASE v1.00 as you can't have both with the same Content ID on the PS4 System. 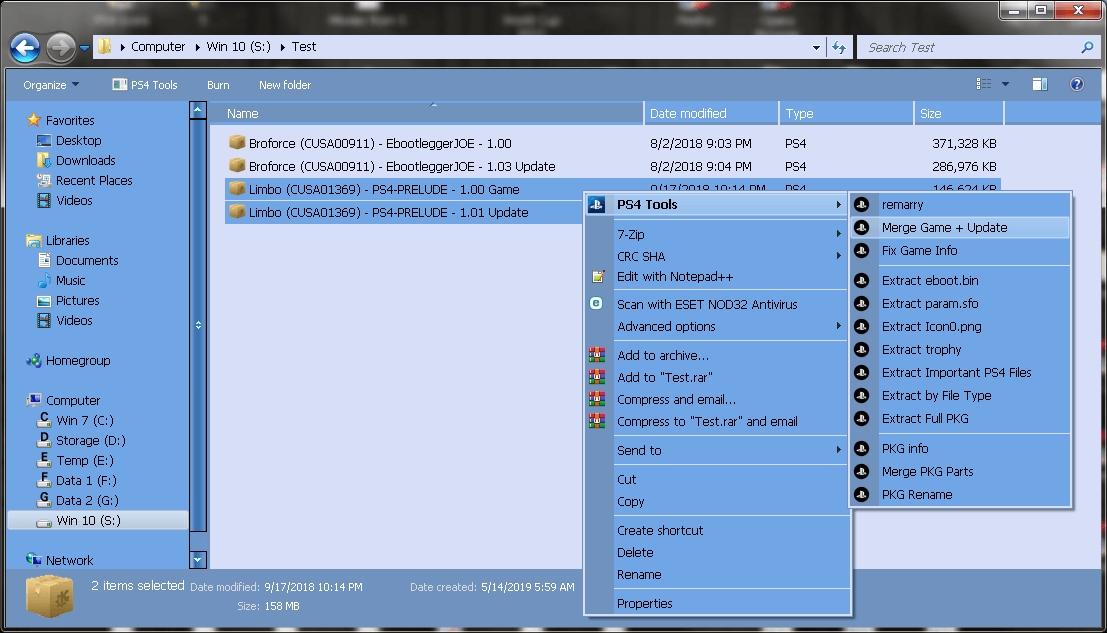 Remarry
To remarry Game and Update both files needs to be selected, after that just click Right Mouse Button on them and select 'Remarry' in PS4 Tools context menu.

Merge Game + Update
To Merge Game and Update both files need to be selected, after that just click Right Mouse Button on them and select 'Merge Game + Update' in PS4 Tools menu. Merged game will be Remaster Type with already proper display version in PS4 System Menu in single PKG file.

Fix Game Info
For files which already exists as base game with update inside or already merged, but display option on PS4 System shows v1.00. This option will create small PKG update around 5-10MB. After that PKG should be installed on PS4 and you will have proper displayed version of game on PS4 System Menu.

Extract eboot.bin
This option will extract only eboot.bin from PKG in current directory.

Extract param.sfo
Only param.sfo will be extracted from PKG in current directory.

Extract Icon0.png
This option will extract only Icon0.png from PKG in current directory.

Extract trophy
Only trophy00.trp will be extracted from PKG in current directory.

Extract Full PKG
This option will create folder with name of game and Extract full PKG in that directory.

Merge PKG Parts
If patch is downloaded from orbispatches and split into parts, this option will merge them into single PKG file. Only one part needs to be selected.

Thanks to @Archi55 for testing, bug hunting and instructions for creating Remaster PKG with proper display version in PS4 System menu.

v35
Added:
Backup Backported Files
Will backup all backported files from backported pkg in zip file. For < 9.00 users who want to keep Game & untouched Update. After backup is done, user can delete backported pkg to save space on hdd.

Extract Game Modules
Only for backporters. All files which need to be backported will be extracted, while folder structure is preserved, for easier work.

Developer
Senior Member
Contributor
Verified
@Chronoss09
Sorry for late answer, I only have win 7/10, so I can't test on 11. Anyway you can restore classic right click context menu on Win 11 just google for it, but still not sure if it will work.

All temporary files are inside PS4 Tools v25 folder but everything is cleaned after operation is completed.

Member
Contributor
Verified
thanks for this tool, it's really useful. It's also possible to drag'n'drop the 2 pkgs onto the "merge fast.cmd" for those that don't want/can't install the context menu once the prerequisites are done.

I have 2 questions/things: If I merge game + update into a new package with the correct version: is it possible to add a later patch if one is released? Or can the patches only be applied to V01.00?

It would be nice if the windows would not close automatically in case the process fails. So one would be able to see what caused the error.

Aside from that: A really useful tool.

Developer
Senior Member
Contributor
Verified
@yeilnoung
1. Probably not, you will must again merge new patch with 01.00
2. Just open merge fast.cmd with notepad and on the end add new lines:

Code:
or if you want message Finished

Member
Contributor
Verified
@jation thanks for the input. Shame on me for not thinking about inserting the pause command.

Just to clarify the other question ... currently I manually merge base + patch as follows:

This generates a merged pkg with V01.00. But I can live with that.

For example, If i created a merged pkg with base game + patch 01.08 and somehow later a patch 01.09 is released ... would it be possible to merge it again
a) using the manual method (as the merged pkg still appears as V01.00)
b) using your method (showing the correct version with the merged patch)?

Member
Contributor
Verified
@yeilnoung
i also do manual merges when i see i can remove some audios. After some testing i found that:

I edited the Merge Game + Update script to let you delete/edit files on the merged folder before it creates the fpkg, this way you can "rip" the game as you like (ex: delete audio files, edit changeinfo.xml...)

It will pause the progress and beep so you can delete/edit the game folder.

Member
Contributor
Thank you for your voice of knowledge! That tool is what I was looking for.

Staff Member
Moderator
Developer
Senior Member
Verified
Most of options on v35 is tested by me personally, but still feel free to ask if you noticed something weird

Member
Contributor
Verified
is there any way to merge (games+ DLC + update) in one single pkg file ??