To quote from the README.md: PS4 wifi/bluetooth firmware reversing h4x

The PS4 uses a hardware module codenamed torus for its wifi and bluetooth. Currently there are two different versions of this; the older torus1 and the newer torus2.

The torus firmwares are stored in plaintext on the PS4's flash. The PS4 loads them into the hardware module.

This is not going to lead to some magical hack of the PS4, its just fun to poke around inside it to see what it does.

The older torus1 is based around the Marvell Avastar 88W8797 SoC. It supports up to wifi n. This SoC has a Marvell Feroceon CPU (ARMv5TE-compliant) inside it. Check this pdf for more specs: marvell_avastar_88w8797.pdf. 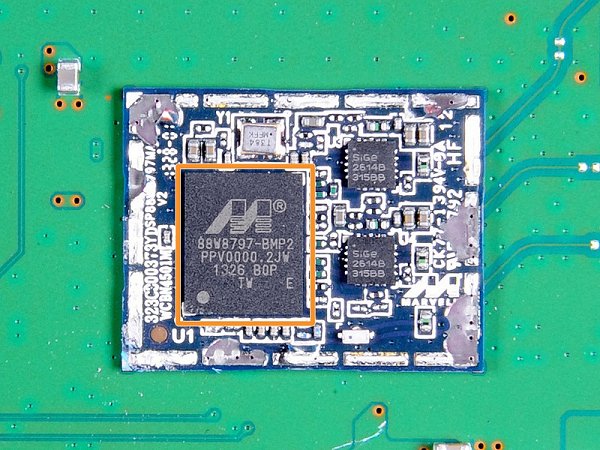 Torus2
The newer torus2 is based around the Marvell Avastar 88W8897 SoC. This updated SoC adds wifi ac. It is used in PS4 Pro consoles and probably PS4 slim since I see that PS4 Slim supports wifi ac. Check this pdf for more specs: marvell-wireless-88w8897-product-brief-2018-10.pdf

Apparently this SoC also inside the XboxOne

The firmware can also be found inside the PS4UPDATE.PUP update files. The PS4UPDATE.PUP files internally contain multiple PS4UPDATEx.PUP entries. The torus firmwares are inside PS4UPDATE1.PUP and can found from their pkg ids: 0x003 == torus1_fw.bin 0x022 == torus2_fw.zip

Note that newer firmwares will include both the torus1 and torus2 fws, so there will be two "C0020001" files.

The first step is to convert the firmware file into an elf file by running fw_to_elf.py. This makes it easier to access the firmware contents with various tools that support the common elf file format.

The next step is to disassemble the elf files using whatever tools you normally use to reverse arm/thumb binaries. If you use IDA v7 then you can use the "ida_fw_setup.py" script I made to perform the data init routines that unpack, copy and clears data in various ram locations. This is quite important for torus1 fws to unpack packed data, however for torus2 fws it seems to just zero out certain ram areas, probably bss areas.

Load the elf into IDA. It should detect as ARM little endian. On the initial load screen you might want to do: Processor options -> Edit ARM architecture options -> tick ARMv5TEJ and then Kernel options 1 -> untick Create function tails

Now you can run the script by doing: File -> Script file... and then selecting "ida_fw_setup.py".

v1.0
Also today from zecoxao comes an ARZL_decompress utility, who states the following to quote:

"This executable decompresses ARZL binaries for the ps4, like the compressed eap kernel. This SHOULD also work on vita but i'm not sure about it."

Member
Contributor
Maybe it leads in the future to the possibility to downgrade system firmware to 4.55 ??!!

Senior Member
Contributor
Verified
Hold my stuff, I will alert the press.

Senior Member
Contributor
Verified
@amigo74 how precisely you think looking inside Wifi/BT driver could led to a downgrade....?

Senior Member
Contributor
Verified
@amigo74 i don't think it will lead to a downgraded ps4, but to unlock kernel i hope.
"copy and clears data in various ram locations"