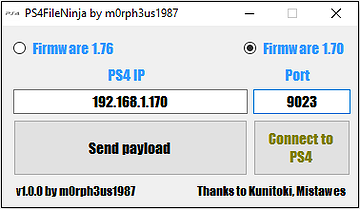 I am glad to share with you my first PS4 related public release. It is called PS4FileNinja and it is basically a file browser. It currently works on FW version 1.70 and 1.76. The usage is simple:

1) Start code execution in playground.
2) In PS4FileNinja select FW, insert PS4 IP and click on "Send payload".
If the payload was sent successfully, click on "Connect to PS4". 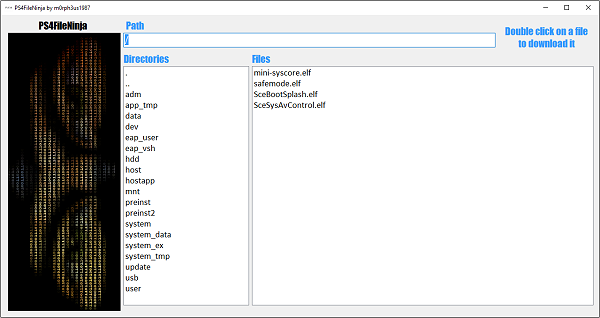 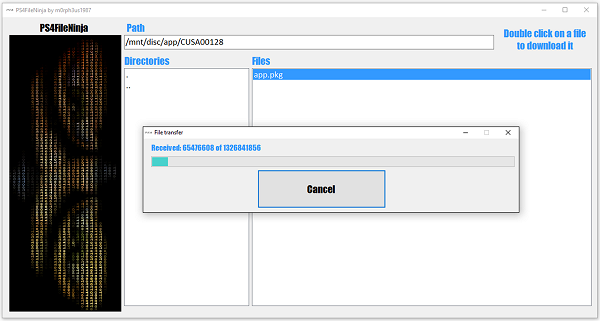 Developer
Senior Member
Contributor
Promoting backups can be as simple as copied movies that are decrypted allowing to play over a network. In any way removing or tampering with encryption is deemed as backups under the copy right act.

He/she has a right to make a personal backup as long as it is not tampered encryption. Now as far as I understand dvd/bluray all have encryption schemes including iTunes netflix and all online services.

As for the console sure we have cfw systems but if I'm not mistaken how many use this for tormented games? I myself don't I don't even use cfw on mine they are strictly linux systems now.

On the odd occasion I do but not for games n besides running cfw to all these end users they see it as a way of playing games for free so where in thus do you not see backups? You and I both know opa is just as much in this as any1 else

B7U3 C50SS said:
if that's the case @Chaos Kid i sill don't understand why your stance is against backups.. i mean I kind of get it. and yet I also kind of don't get it.. ya know? the fact you can hack almost anything with a CPU AND YOU ARE GOOD AT IT TOO!! But you are also unwilling to make public releases besides that 4.65 multi-man.. but i guess no one saw what you were up to then either then..

EDIT: However I will say that i think people are getting ready to make a big release for PS4 soon. however, not sure how soon.
Click to expand...

As developers we have a greatness for knowledge n understanding workarounds it's not always about what's released but sometimes for a greater cause then what most have seen.

We have bin around for a long time waiting n watching we all share same account as we all go thro one man. You have seen the first of his releases ages ago but time is not always the same for every1.

Cracking is a art but not something one needs justification for nor fame over this is how many hurt industries n they seek justice using the system. But when ppl understand that backups isn't always the way n development is so much greater then you will understand y we don't promote backups in any way

I promoted him in hopes his second post will be a working PS4 iSO Loader (jk) but heyyy... stranger things have happened

I promoted him in hopes his second post will be a working PS4 iSO Loader (jk) but heyyy... stranger things have happened
Click to expand...

uhhh why did you really promote him??

Actually Kraken (yes, this one as it's an imported account I checked) is a Senior Member on the old site HERE who's been with us since Apr 8, 2005 and has 220+ posts... 'nuff said

Senior Member
Contributor
Sorry about the test post. I had typed something much longer but it wouldn't let me submit, so I tried just posting "test", but then I couldn't edit or delete the test post. Unfortunately, the original post wasn't a PS4 hack .

I am in fact the same Kraken that used to be a moderator here ~10 years ago, but I mostly lurk now since work/life keeps me busy. I still like to tinker when I can, but developing hax is far more difficult now than it was in the PS2/Xbox era. Thanks for the promotion, it's good to be back!

Senior Member
Contributor
Welcome back @Kraken and it's okay about the test post.

Member
Contributor
Is it possible to extract .pkg files and convert to iso so that the ps4 can open the iso as a disc?

Milesh said:
Is it possible to extract .pkg files and convert to iso so that the ps4 can open the iso as a disc?
Click to expand...

Well ... if that were slightly possible... we would be playing our brains off instead of lurking around these type of threads!! hahaha
You must log in or register to reply here.
Share:
Facebook Twitter Reddit Email Link
Recent Articles
FRMCHK: Identify PS4 Games in Firmware Groups by DefaultDNB (KiiWii)
As the PlayStation 4 scene inches closer to a 6.72 full jailbreak since the 7.02 Kernel Exploit and 6.72 WebKit Port releases, today developer and homebrew tester extraordinaire @DEFAULTDNB shared...
PlayStation 5 Amazon Page Goes Live with PS5 Weight Listed
Each passing day draws us closer to the Holiday 2020 launch for Sony's next-gen PlayStation 5 video gaming console, and today online sales giant Amazon.com put live their PS5 page just days after...
Ubisoft Forward: Far Cry 6 World Premiere Trailer & More New Videos!
Those who missed the Ubisoft Forward event can check out the World Premiere Trailer video for Far Cry 6 which is slated to hit PS5 on February 18, 2021, over 30 minutes of actual gameplay from...
PS4 6.72 Payload Ports, Updated Mira Project Support & ELF / Loader
Following yesterday's PS4 6.72 Payload Ports by @Al Azif on Github, this weekend kiwidoggie added 6.72 support updating Mira Project to include 4.74, 5.01, 5.03, 5.05 and 6.72 Passing Builds with...