Previously the PlayStation 5 Scene saw a PS5 WebKit Vulnerability alongside implementation of a PS5 Userland Exploit for 4.03 PS5 Firmware, which was followed by PS5 Debug Settings & Root Keys Obtained with scene developer @Mathieulh openly stating on Twitter that "Kernel execution has been achieved since week 1" around when the AMD Server Vulnerabilities were disclosed as @zezu420 (aka Znullptr) confirmed the pOOBs4 ExFAT Bug also affects PS5 while BTC Donations set up allowed the lead developer to get a PlayStation 5 console to fully implement the KeXploit on... exemplified by today's PS5 4.03 Kernel Build String image below from Znullptr (aka dmiller423) on Twitter!

Those who would like to support his continued development work may do so via BTC Donations, GoFundMe, becoming a Github Sponsor or Patreon.

Before collectors of PS5 Game Dumps in the PS5Scene get too excited, there's currently no ETA for a public PS5 Kernel Exploit release... but at least knowing it works on 4.03 and below may help those considering updating to Sony's current 4.50 PS5 Firmware make a wise decision not to update for the time being.

Be sure to vote in our current Site Poll: Is it too soon for a public PS5 Jailbreak?

Finally, we'll keep the PlayStation 5 (PS5) Jailbreak Status page updated as things progress with some related articles (sorted by date, with the oldest first) and Tweets below: 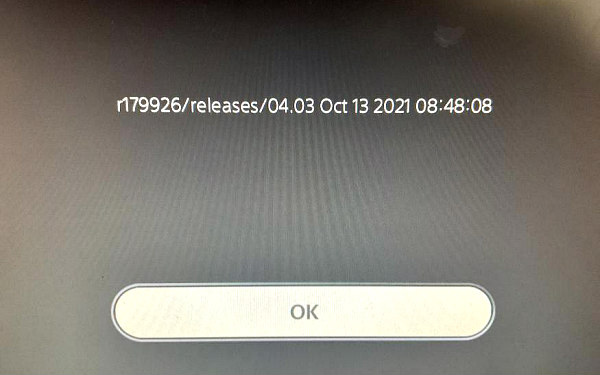 Member
Contributor
thanks and very happy to be here

VIP Member
Member
Contributor
Verified
There is literally no reason to not release that hack. It will be niche like the PS4 1.76 but lead the way for the 4.05+ exploits we had.

If there was any possibility it working on higher firmware I say hold on to it. But it was patched before this was even publicly known.

Member
Contributor
Hope this week come the PS5 4.03 exploit so i can sell my PS4 Pro Death Stranding

Member
Contributor
Verified
@andisheegold the vulnerability is patched but I was talking about the exploit mitigations/security features to stop us turning a vulnerability in to a full exploit.

From the new writeup today for example we can see Clang CFI/Control flow integrity which is a security method to stop vulnerabilities becoming exploitable was bypassed. This creates a list at compile time of what each part of the program can talk to and stops you talking outside of this list, which is what exploits would do.

A couple of years ago it was shown there were a few exploits against this extra security method, one of which was used (overwriting the stack/memory where the list is stored... kinda) for this new PS5 PoC.

Now Sony knows this was done, they might try recompiling the executable again with different flags to protect against this technique in future versions. That is a crude example of what I was getting at. Patching/changing security methods rather than core executables that might get exploited.

It depends on what and how it was bypassed. I'm not even sure if it would matter in this case saying all that though. I think most exploits will be investigated using lower level firmwares unless newer FW can be checked against previous ones to see the differences/what was patched and exploits reversed from found patches.

Glad we have this userland sploit though. More people looking at it might find ways to get around the XOM memory protection.

Thats how I understand it anyway

Senior Member
Contributor
Verified
Any reason why people are still voting against this? Just Curious.

Member
Contributor
Verified
If gow Ragnar or forbidden w, or even gt7, coming it will be on newer version than 4.03.

And I just got my ps4 after long struggling, good luck for you ps5 owner, really happy for you guys